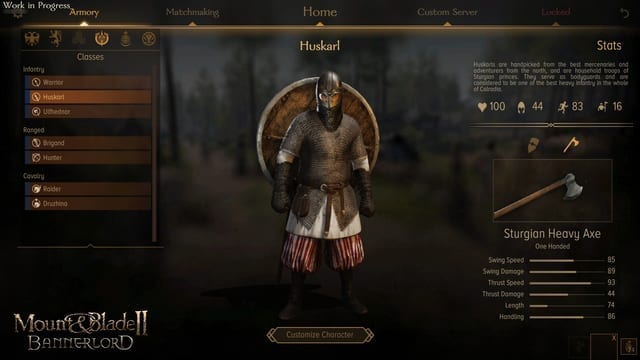 Mount & Blade II: Bannerlord was first announced all the way back in 2012, and it still doesn’t have a confirmed release date. However, TaleWorlds Entertainment has been sharing steady and detailed dev blog updates on Steam for a few months, and it looks like it’s finally gearing up for a release date announcement. In May the developer also announced that the game will be partially playable at Gamescom 2019, and last month there was the announcement of a closed multiplayer beta for select members of the Mount & Blade fan community. Today the developer shared a short update on the multiplayer class system. Here’s what you need to know about it.

Bannerlord features a class system divided into three distinct categories: infantry, ranged, and cavalry. TaleWorlds aims to ensure that each class is a viable choice, allowing players to choose their preferred unit type. Each of these classes has a set of strengths and weaknesses so that one size doesn’t fit all. Yes, some classes are obviously stronger and better equipped. However, that doesn’t mean they will be able to perform at a higher level in every instance of gameplay. Those classes also come at a higher cost, limiting your options in terms of respawning. This approach places a stronger emphasis on coordination, communication, and synergy between players in a team. It also encourages players to experiment and react to the events as they unfold.

The game also features a perk system, allowing players to modify their loadout slightly if they wish, tailoring their class choice to a particular play style. It can also serve as a means to counter the class selection of the opposing team. It allows players to jump straight into the action, knowing they aren’t at a major disadvantage against their opponents in terms of equipment. TaleWorlds also reworked a connected system from Mount & Blade: Warband, namely the money system. In Bannerlord, money is referred to as points. You can spend points on selecting your class, instead of just using them to purchase gear for your character. Some of the game modes feature a respawn system so that managing those points through a play round will determine the classes you’ll have access to, as well as the number of respawns available.

These changes aim to shift the gameplay focus onto player skill and teamwork, instead of rewarding better equipment or loadout. And they will also prevent a snowball effect where the winners just get strong with each consecutive round victory. Each round of multiplayer in Bannerlord starts on a somewhat level playing field, allowing teams to have a more exciting back-and-forth experience throughout the course of a match. It is also important that each class reflects the faction it originates from, not just in appearance, but also in terms of equipment and role performed. As such, the classes also take into account the strengths and weaknesses of the faction as a whole.

What do you think of Bannerlord‘s multiplayer class system?

Destiny 2’s Tribute Hall: How to cheese and complete everything