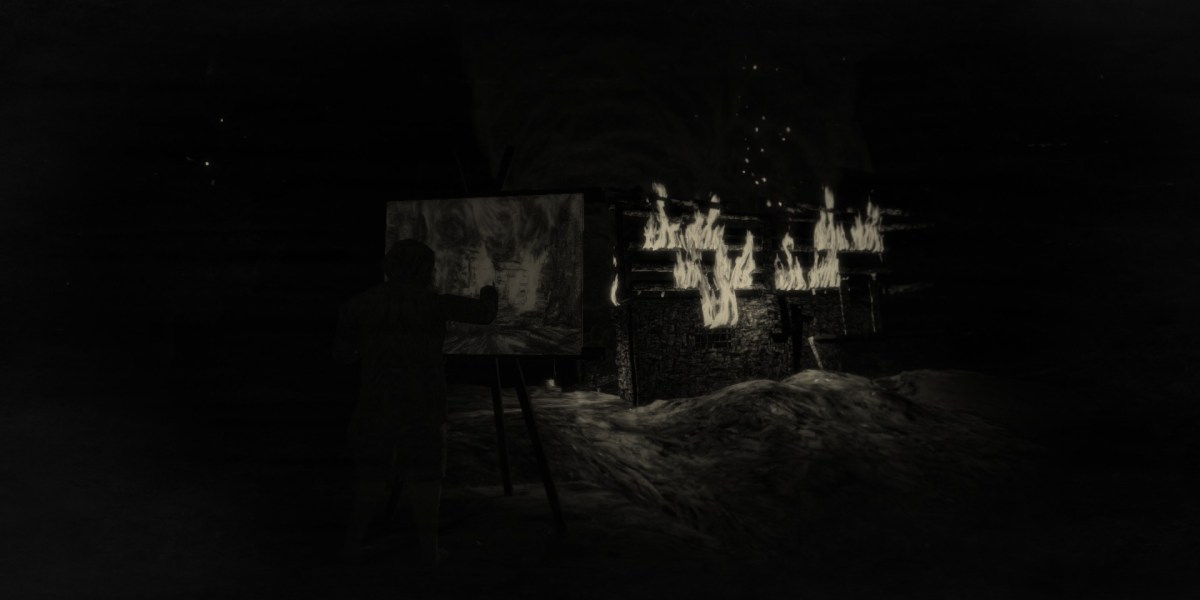 First-person horror games made by tiny teams tend to come in two varieties. Commonly, you may find these games to be short, frustrating, and ineffective. But the rarer type is often so compelling that it’s worth wading through the refuse to discover. Mundaun does a hell of a lot right, all while offering strong world design, an intriguing narrative, a unique presentation, and rewarding exploration. It’s one of those occasional games that grabbed me. I didn’t want to stop playing until I hit the credits. Mundaun isn’t all that scary, but it can be rather unnerving at times, even more so if you find the sepia aesthetic unsettling.

Mundaun‘s setup is built around one of those endlessly repeated tropes. Curdin’s grandfather Flurin has passed away, so he’s returned to the village of Mundaun in Switzerland to pay his last respects. Flurin was said to have perished in a barn fire, but examining the scene shows that his body is frozen in limbo. A creepy old man appears and deforms Curdin’s left hand, bidding him to investigate. From there, Curdin has to search the village and its surrounding areas, all while learning about the past choices that led Flurin to end up in his unusual predicament.

Dialogue in Mundaun is voiced in the uncommon regional dialect, Romansh so keep that in mind if you demand that every game you purchase have English voice acting. Personally, I prefer authenticity. The narrative is interesting, more so for many of its choices than the plot itself. From a broader perspective, this is a fairly standard horror story. But whether you’re having a conversation with a severed goat head or carefully exploring a shack overrun with bees to find a jar of honey, the details make for a more inviting experience. The game even has some slightly different endings, although these are based wholly on late-game binary choices. 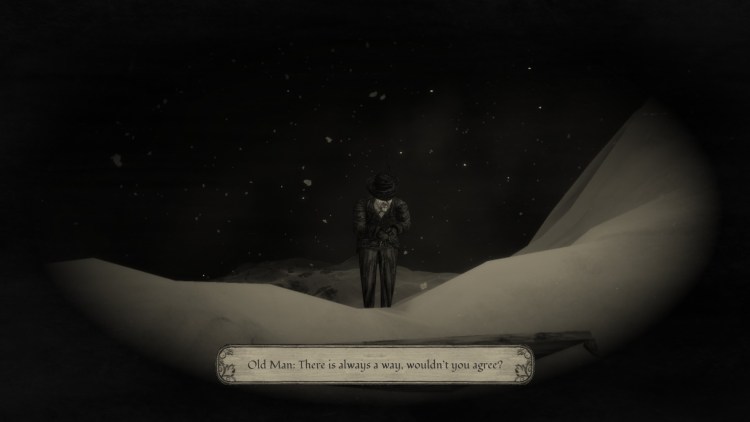 A Muvel and a shaker

Mundaun‘s world is broken up into three distinct areas. The second and third of these are fairly large, and all are well worth exploring. Although these areas are broken up by loading screens, they’re directly connected to one another and can be freely traveled once you have the means to do so. Curdin has an inventory and a journal that you’ll use to keep tabs on your current objectives. It’s typically easy to figure out how to progress, although I did run into a couple of snags that made me waste a couple of hours. The first time this happened was because I came face-to-face with a puzzle that I didn’t realize was a puzzle at all. The second time was because I solved a puzzle too early and the game refused to recognize it until I triggered something unnecessary and wholly arbitrary.

The areas have plenty of shacks and locations that contain resources. Curdin has three statistics that can be leveled up throughout the course of Mundaun: health, sanity, and marksmanship. They can be increased by finding items scattered throughout the game’s locations. Eating bread raises his max health, reading rifle manuals makes him a better shot, and drinking a cup of coffee increases his sanity.

The coffee is the most interesting of the bunch. You actually have to fill a pot with water, put it on the stove, and put coffee in the pot. Then, Curdin just places a log in the burner, waits for the water to finish boiling, and then pours the prepared coffee in a cup that’s used from the inventory. It’s a bizarre inclusion that becomes stranger due to how different locations allow him to store the necessary ingredients that the game will then teleport to every area that includes a kitchen.

Mundaun‘s first area needs to be explored on foot, but subsequent ones will need the Muvel — a hay baler vehicle that belonged to Flurin. In another surprising nod to player friendliness, the Muvel can be summoned by staring at specific posters placed throughout the world. You can’t ever lose it. At one point Curdin even needs to fill the thing up with hay. That isn’t Mundaun‘s only mode of transportation, either. The snowy mountain that comprises the third area has multiple sleds to find. There’s even an Easter egg where Curdin can challenge another character to a sled race for an achievement. It’s delightfully silly. 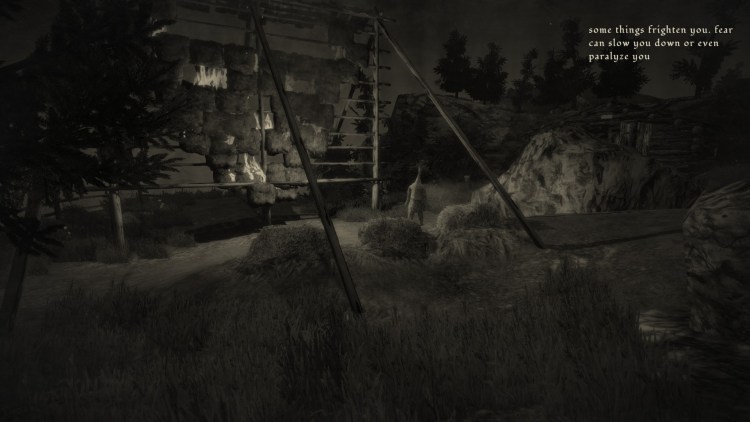 Don’t fight me on this

There are four enemies to face in Mundaun. You have your pick of a hay monster, a floating beekeeper, a zombie-esque soldier, and snow creatures that can summon avalanches. But the game is fairly lax in regards to fighting and survival. Curdin’s blighted hand reacts when enemies are nearby, so they won’t typically surprise you. And health regenerates too, so it’s rare to die as long as you get away from enemies. Curdin can fight either with a pitchfork or a rifle, but pitchforks break and rifle ammo is sort of scarce. The beekeeper enemy is invincible, though, and the others aren’t all that problematic to avoid, so the enemies don’t present much of a threat. I didn’t fire a single shot the entire game.

Mundaun seems like it goes out of its way to make sure it’s never frustrating or tedious, which I appreciated. There’s a lot of practiced, nuanced game design on display here. The game will even block you from exploring certain areas if you’re in the middle of something, which cuts down on instances of getting stuck — save for those two aforementioned puzzles. It’s also well paced, gliding from each section to the next smoothly, even if there’s some backtracking to be found.

Overall, I greatly enjoyed Mundaun when I wasn’t wandering around aimlessly those two times. It’s a unique game that would be a good purchase for anyone that likes narrative-focused horror games, but doesn’t need to scared most of the time. It’ll take most players around seven or eight hours for a first playthrough, so it’s got a decent amount of content too. My biggest regret is that I wasn’t able to keep an autosave from before the first binary choice. I wanted to see all of the endings. You you might want to keep a few backups handy, just in case. On the other hand, I can certainly see the appeal in speedrunning the game, which is a great excuse to do just that. 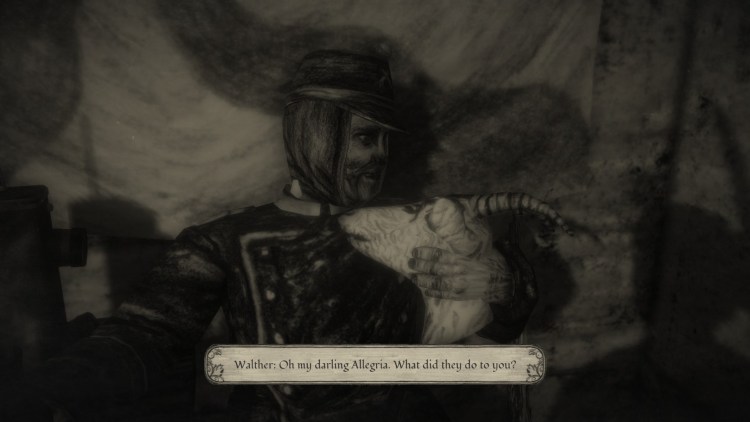 Undeniably odd, yet constantly willing to be accessible, Mundaun has a lot to offer anyone fond of horror and exploration.