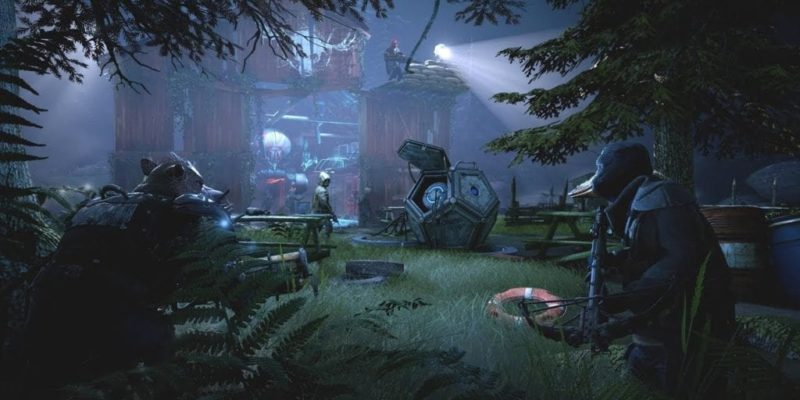 A mutant duck, boar, and woman walk into a bar…

I’ve always been fond of mutated animals acting as humans. I mean, I was a byproduct of the Ninja Turtle generation, so, who can blame me?

The cinematic teaser for Mutant Year Zero: Road to Eden opens up with a band of characters, including those mentioned above, looting a small abandoned building. The stage is already set as we find out from a torn newspaper clipping that the world has been hit with nuclear weapons and it is the “End of Mankind” as the headline reads.

The biggest question for me regarding Mutant Year Zero was: What kind of game is this? Often times a cinematic release can provide hints as to whether this is going to be an action-adventure game, FPS title, or something heavy in the RPG sector. It wasn’t until I sat down with game Director Lee Varley, Producer, Mark James Parker, and studio founder David Skarin that I would see a glimpse into the gameplay and direction Mutant Year Zero was heading.

The first thing that I should get out of the way is that there is some serious veteran power behind Mutant Year Zero. Varley previously worked as the Lead Level Designer on the Hitman games, while David Skarin also worked the Hitman franchise. As they started giving their background and having played the most recent Hitman title, I could see the picture that they were starting to paint when it came time to discuss the gameplay elements of their newly founded studio and project.

One of the main points of emphasis throughout the presentation was to prove that you could indeed blend a real-time exploration and turned based combat. Areas of the map could be explored in a top-down view of the map in order to discover weapons, find cover, and most importantly, stalk enemies. However, when it was time to engage these enemies, you could enter the turn-based mode and determine just how you exactly you’re going to take out an entire squad of ghouls.

The Ark is humanity’s last outpost.

Much like any other RPG, there is the main hub where purchases and quest information can be learned. In the case of Mutant Year Zero, this area is known as “The Ark.” In the demo, The Ark had a few selectable buildings where you could explore and talk to NPC’s. There are areas to upgrade weapons, buy new items, and speak to The Elder, the only non-mutated human living in this post-apocalyptic world.

You can scout for new enemies and weapons when you are in exploration mode.

The team lightly touched on some of the elements that you could extract from The Ark and utilize while out on an expedition. For example, if you head to the Pripp’s Bar, you can find new quest information. At Delta’s Workshop you can upgrade weapons and parts. Other areas allowed you to purchase new mutations for your characters using skill points. These mutations can be used in combat and changed on the fly, so, when it comes time to upgrade and purchase mutations, you aren’t locked into a single set or tree.

After seeing some of the exploratory elements we then headed out for a mission to retrieve a generator. Here we would see some of the early characters—Dux (the duck), Selma (human), and Bormin (the boar)—head out and attack a small compound out in the wasteland known as The Zone.

The combat of the game was really something that I had been missing in turn-based titles. My attention span is often short-lived, one of the main reasons that I’ve steered clear of stat-based games practically my entire gaming career. However, being able to go from exploration in a level, right into turn-based combat, and then back out in real-time was refreshing.

During the raid on the camp, the trio of Dux, Selma, and Bormin came across scattered enemies. They ranged from your standard grunt Ghoul to your Heavy Ghoul, an enemy strong enough to knock you down and make you lose a turn in combat. The best part of entering the camp was that you could approach it at your own pace. Meaning, you could take cover, position your squad strategically, not drawing the attention. Then, when the time was right, you could pick off stray guards so that you wouldn’t be taking them on all at once.

During the mission, Skarin noted that there were a few things to explore on the outskirts of the level. He managed to take out a few guards, including Howler Ghouls that alert other enemies of intruders. During this time, he also positioned Selma into cover and sent Dux up to an elevated vantage point. At this time he was also commanding Bormin to the backside of the map for infiltration. Here we came across a giant mech with the title Mimir Z600.

Skarin then mentioned through exploration and discovery you could learn about the mech’s vulnerability, which allowed its systems to be overridden, and then used in combat against enemies instead of on their side. Not only did this showcase the games cover and combat systems, it also showcased how exploration and tactical strategies have huge payoffs. And in this case, it was the enjoyment of the Mimir Z600 (which resembled the ED-209 from Robocop) to attack the squad of enemies.

You can engage enemies in turn-based combat when you’re positioned just right.

The battle with the mech and squad of ghouls lasted about 20-25 minutes from preparation to end. Of course, this also included some of the protagonists being downed and hit a few times. We also saw a few mutations at this time. We saw Dux sprout wings and fly, giving him the opportunity for an aerial view of enemies and allowing him a critical hit. Selma could latch onto the overrun forest through the ground and have vines shoot up at enemies. Boar called upon a mutation that gave him a stone-like exoskin, allowing him to deflect damage. These were important due to the variations in enemy types, which also included a molotov cocktail ghoul that had a decent range of splash damage when killed.

I find it funny that I’m excited about a turn-based tactical game with exploration elements. I have the attention span of a gnat, yet am interested in Mutant Year Zero. The exploration and discovery are something that breaks up traditional battles, not to mention the impressive detail I’ve seen in terms of environments and design.

The only real critique I have of the game is the name. Mutant Year Zero: Road to Eden is a mouthful, even though it was coined after the pen and paper RPG Mutant: Year Zero. But, what I’ve seen from the actual gameplay makes up for that in all aspects.

Here’s a trailer for the new Fortnite guided missile