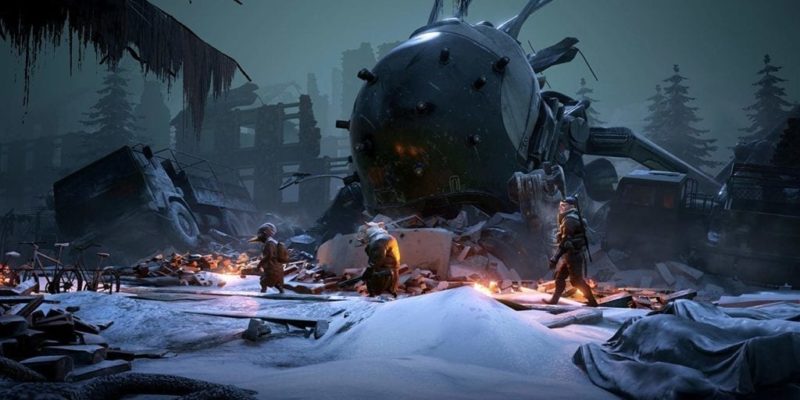 Mutant Year Zero: Road To Eden is a top-down, turn-based shooter from developer The Bearded Ladies. This Swedish developer’s take on the post-apocalypse is entering well-trodden ground pioneered by games such as XCOM or the original Fallout. Does Mutant Year Zero bring enough to keep the genre fresh and entertaining? Let’s find out, shall we?

Most of your time spent in Mutant Year Zero will be in the spent in the combat. XCOM veterans will immediately feel at home here. For the uninitiated, Mutant Year Zero plays like a turn-based strategy game instead of a typical run-and-gun shooter. Players control a squad of three characters and their host of special abilities. At the end of the day, the ultimate goal is to set up your characters in advantageous positions with angles against your enemy.

The weapons available for use are the standard fare of assault rifles, sniper rifles, shotguns, etc. Towards the end of your campaign, you might stumble upon some rare plasma-based weapons. There is also a large collection of scopes and damage mods that you can apply to each weapon. These weapon modifications boost the stats of each weapon, such as range or critical strike chance. Some mods can even provide a chance to set enemies on fire or disable robotic enemies, with the latter being very helpful near the end of the game.

Along with an arsenal of weapons, each character has a myriad of special abilities they can call upon to help turn the tide in battle. For example, you can use the Moth Wings ability on sniper characters to sprout wings and take to the sky. This not only gives you the high ground advantage but also opens up sight lines on enemies that are behind cover or above you.

It’s a tried and true approach to combat, with roots back to Fallout and XCOM, and it holds up here. The turn-based system provides you with a playground where you can try multiple strategies on each encounter, iterating until you find success. This is especially true on the harder difficulties, where you will die repeatedly. Luckily, with each death comes a chance to try a new strategy. For the masochists out there, there is even a permadeath mode if you’re looking to make Mutant Year Zero even more challenging. 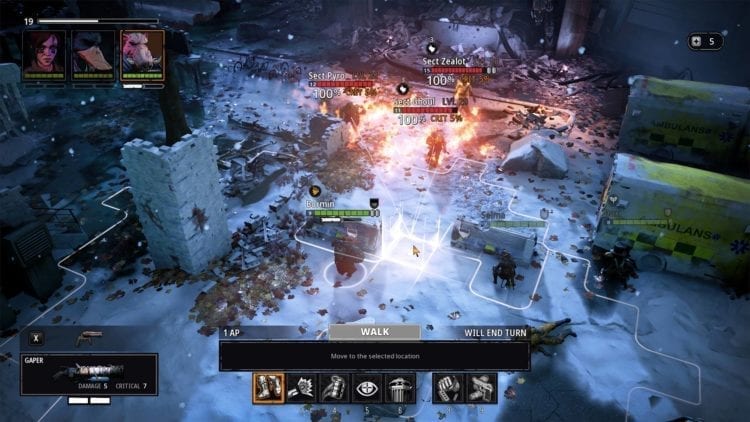 Outside of combat, exploration and stealth are heavily encouraged. As you sneak around looking for advantageous positions and easy kills, you’ll find that each mission is littered with piles of scrap and broken guns that can be used as currency or to upgrade weapons. The most thorough explorers will find special items called Artifacts.

Artifacts are common household items, such as a computer, that are extremely valuable in the post-apocalyptic world of Mutant Year Zero. Instead of trading Artifacts in for straight currency, they are exchanged for points in a special perk tree at the local bar. These perks can be anything from extra grenade damage to a discount at the local vendors. Medpacks are scarce on the harder difficulties, so that discount can be extremely crucial to keeping your party well stocked and alive.

The plot of Mutant Year Zero is simplistic and stays out of the way, but it builds an interesting universe. The story is set after an apocalyptic disease, The Red Plague, wipes out most of all the Earth’s population. You play as a group of Mutants who serve as Stalkers for humanity’s last refuge, the Ark. Stalkers, who take orders from the Elder of the Ark, are heavily armed scouts that both defend the Ark and scavenge for supplies outside the safety of its walls. When the main mechanic of the Ark goes missing, it’s the Stalkers who are tasked with bringing him back safely.

Don’t come to this game looking for a wide-reaching narrative full of interesting choices and surprises. However, the story is serviceable, and I personally will always prefer a game with a simple story versus one with hour-long cutscenes. However, I do wish Mutant Year Zero provided just a few more dashes of exposition. I feel like some threads of the story, like Lux’s Castle of Light, are established well but don’t end up going anywhere.

Like Fallout, the dialogue in Mutant Year Zero is witty and fun. The two main characters, Bormin and Dux, are a boar and duck who have gained sentience through some form of mutation. Both characters remember little of their life before becoming Stalkers, and as such have no experience of what the world was like before the Red Plague.

This leads to some entertaining writing as your characters explore the world outside the Ark. As you stumble upon old world relics such as trains, your squad will remark on how silly the idea of sideways buildings on rails is to them. The previously mentioned artifacts are also accompanied by these silly quips. In my play-through, Dux referred to iPods as “Hipster Fruit Testers” and feared the mighty Boombox as a deadly weapon. Unfortunately, the fact that Dux even knows what a hipster is only proves that even the apocalypse won’t save us from the obnoxious counterculture. 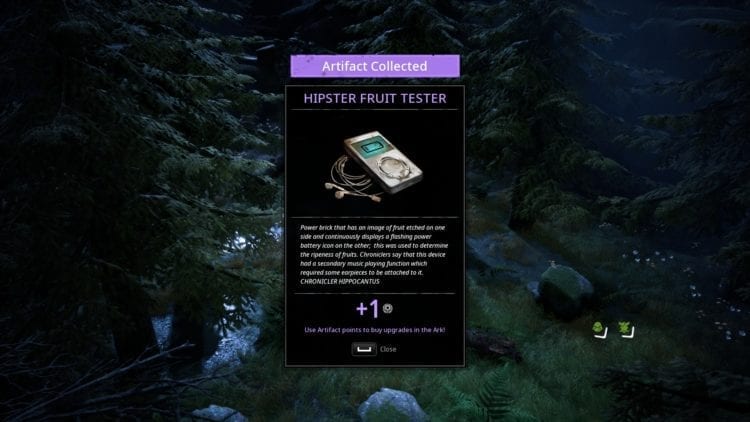 Hipsters only listen to the freshest beats…

Short, But Could Be Sweeter

Unfortunately, Mutant Year Zero’s biggest flaw is its length. Just as the game introduces some new enemy types and interesting weapons, the ride is over. You barely even get to use the highest level skills in your perk trees. Even after doing every side quest I could find, my squad only unlocked their ultimate abilities just one or two sections before the end of the game.

My play-through took about 12 hours. In 2018, this is a little disappointing. I didn’t run across any choices or alternate paths that would lead to more actual content. However, players can play on the higher difficulties to extend their playtime. Even one step above Normal difficulty is extremely punishing. Luckily, Mutant Year Zero is appropriately priced for the amount of content it contains.

My final complaint with Mutant Year Zero is stability. During my twelve hours of game time, I experienced quite a few crashes. These seemed to be concentrated on the back-half of Mutant Year Zero. Luckily, the game is pretty aggressive with its auto-save function. This prevented me from losing too much time when things went computationally sideways.

However, one particular crash occurred immediately after defeating the final boss of the game. This crash ended up corrupting my auto-save. Luckily, I had manually saved just beforehand so I didn’t lose too much progress. However, I did have to repeat the final boss fight. This would have been incredibly frustrating on the higher difficulties. It’s possible these issues are a result of a problem on my end and not caused by the game itself. As such, this will not be reflected in the final score and instead just serve as a word of warning. Be sure to save early and often! 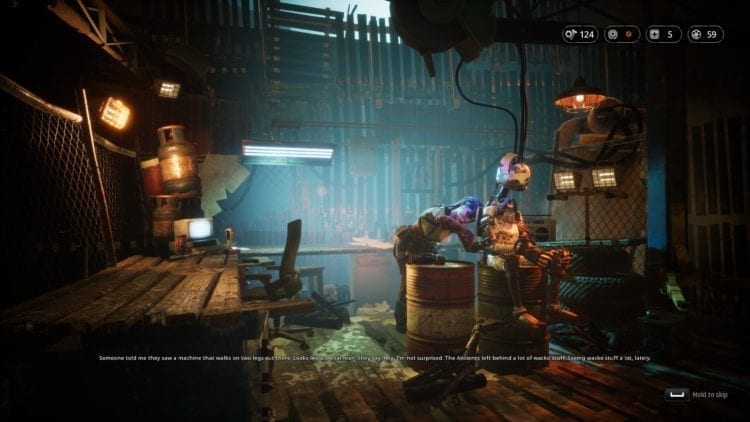 Also, this lady seems mystified about rumors of “mechanical men” outside the city, even though there’s one right in front of her…

Mutant Year Zero is a welcome addition to the turn-based strategy space. While it mostly iterates on the foundation laid by other games in the genre, quirky writing and characters help keep things fresh. Though the story is rather predictable, the setting and combat more than make up for it. Fans of the XCOM franchise that are looking for more should find plenty to love here. This is especially true for those among us who like a good challenge, as the higher difficulties are extremely punishing.

Mutant Year Zero’s biggest flaw is its length. While the harder difficulties will surely slow down even the most brilliant tactician, I can’t imagine a play-through taking longer than 20 hours. As of the writing of this review, Mutant Year Zero is available for $35 US. Whether or not this is enough content for that price is up to you.

While it mostly iterates on the foundation laid by other games in the genre, quirky writing and characters help keep things fresh. Unfortunately, Mutant Year Zero’s short campaign and predictable story hold it back from being a slam dunk.

NylonGate: Bethesda Decides To Provide Canvas Bags After All

Destiny 2’s Black Armory DLC Is Out, And It’s Not What You’d Expect