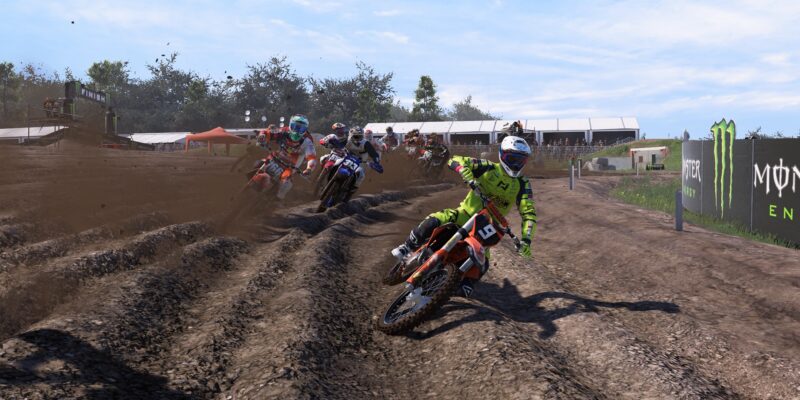 Like most annually released sports games, the MXGP series has had its fair share of criticism for recycling content from previous years. With the release of MXGP 2021 as the latest entry in the series, publisher Milestone hopes to give fans the best motocross racing experience yet. While MXGP 2021 sticks the landing in some areas, there is plenty to be improved on for it to become competitive with more popular racing games.

MXGP 2021 is a realistic racing sim that takes itself seriously and is catered towards veteran players. But the lack of an in-depth tutorial makes the game difficult to get into for newcomers. You are essentially thrown into the first race with barely any knowledge of the controls and core gameplay mechanics.

MXGP 2021 also doesn’t hold back in terms of punishing players for cutting corners and not maintaining balance on the bike. Any small mistake can cause your rider to respawn and lose precious seconds. Sometimes, you’re punished for barely exiting the track, whereas other times you may get away slamming into barriers. While this does make the first few races frustrating, the mechanics are relatively easy to pick up once you get the hang of things. The rewind feature could also be helpful at first but you shouldn’t rely on it too much if you want to improve. Still, it could prove useful when occasional fps drops and stuttering make you crash.

With a lot of practice, the core mechanics should become second nature and new ways to improve your lap times will become apparent. Paying attention to the minimap, anticipating sharp turns, and scrubbing jumps are all tactics necessary for winning. Learning how to maintain balance by shifting the rider’s weight midair is also a skill definitely worth mastering. Adjusting from Forza Horizon 5‘s arcadey gameplay to MXGP 2021‘s more serious take on racing was tough initially. But I soon began to appreciate the added complexity that motocross racing introduces. Career Mode puts you in the shoes of a young rider who joins a team and signs a contract in hopes of making it to the top. After completing races, you’ll earn rewards that you can spend on a wide variety of bike upgrades and customizations. Every season makes you compete in a series of races and fight for the top spot on the standings. The Career mode is rather simple but works well as the game’s most content-filled mode. Players who just want to take part in one quick race can also try out the Grand Prix mode. Time attack is one of those classic modes that is a must-have in every racing game. Thankfully. MXGP 2021 makes going for the best time possible a blast with its high-stakes gameplay. Getting a new personal best time after every lap is extremely satisfying and can keep you hooked.

The Playground is a semi-open area that lets you drive around the map and refine your skills or mess around aimlessly. There honestly isn’t much to see here as the Playground is simply a completely empty open space that feels like a player hub without any players. Those looking to improve their skills are likely better off playing other modes like Grand Prix where they can participate in real races. While I couldn’t try out the Multiplayer mode, I’m sure plenty of players would enjoy intense races against each other. Finally, the Track Editor lets players design their own race tracks and provides a wealth of creative options. However, it suffers from the same UI issues as the game’s menus which makes it more frustrating than enjoyable. While all these game modes are adequate, MXGP 2021 doesn’t offer anything special that hasn’t already been done countless times. These same exact modes are found in previous entries as well as almost every other racing game. In terms of visuals, MXGP 2021 nails the look and sound of bikes but falters elsewhere. The presentation of the surrounding environment is somewhat lacking due to low-quality textures. Trees and distant structures aren’t exactly the most realistic, but that doesn’t detract too much from the racing experience. There is a wide selection of tracks to race on with four of them returning from previous games. Unfortunately, the tracks look very similar and feature dull colors with different accents of brown.

On the other hand, weather conditions such as rain elevate the game visually while also directly affecting gameplay. Racing in the rain means that riders will need to pay extra attention to how they navigate the muddy track and account for the change in traction. While the developers are limited to real-life tracks, not having different biomes seems like a missed opportunity. The game offers a realistic immersive experience that keeps you on the edge of your seat at all times. While the first-person view may not make sense on paper, it works surprisingly well for a game where the position and orientation of your vehicle are paramount. MXGP 2021 is able to provide a solid racing experience that will likely satisfy fans of the sport and previous games. However, the steep learning curve and lack of interesting new game modes stop the game from being more appealing to newcomers to the franchise. Given that MXGP games release every year, it may be difficult for Milestone to provide a completely new experience every time. Still, MXGP 2021 plays it too safe without trying to introduce innovative modes to differentiate itself from past entries. Most mainstream racing games are years ahead of MXGP at this point and Milestone really needs to pick up the pace in the coming years.

The core mechanics are solid and the gameplay feels great, but that will only take the game so far. Perhaps some more arcadey modes and a proper tutorial would have helped it appeal to a wider audience and justify its $49.99 USD price. MXGP 2021 is a good motocross game overall that nails the basics, however, it would have benefited greatly from new content to give it more personality.

MXGP 2021 is a realistic racing sim that will likely appeal to veteran players who are already familiar with the series. However, the game's steep learning curve and lack of innovative game modes make it difficult for newcomers to enjoy.