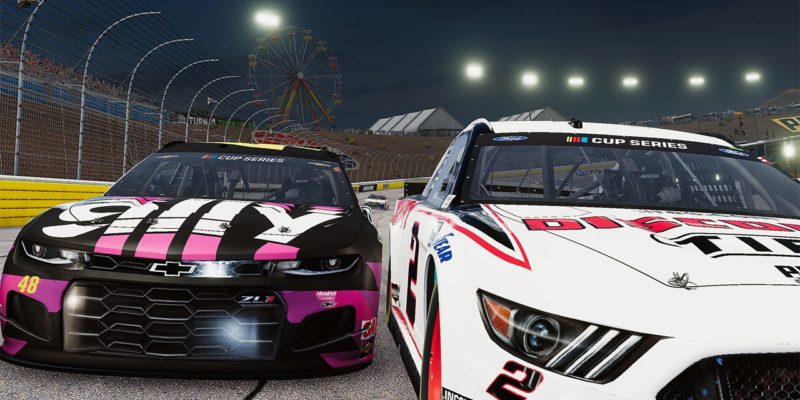 Oval racing is one of the hardest forms of motorsport to make an entertaining game. The subtleties that make the real thing so thrilling for spectators is often lost when translated into the virtual world. This is the difficult task developer 704Games has been trying to overcome for years. But if NASCAR Heat 5 is anything to go by, that mission is still very much in progress.

Driving round and round

NASCAR Heat 5 is a sim-cade racing game that focuses primarily on American oval racing. Contrary to the name, it isn’t just limited to the official NASCAR series. In fact, there are actually four fully licensed disciplines represented, including the satisfying off-road Xtreme Dirt Tour. It’s great to see a licensed game trying to represent more than just the bare minimum. This is something some other games could definitely learn from. As for tracks, the majority of Heat 5‘s catalog is ripped straight out of the real-life NASCAR calendar. The positive of this is that you get a very representative list of tracks. However, it can at times feel a little limited. Of the 29 available tracks, 23 of them are types of ovals. Although there are mild differences in design, track length, and corner speed, all of the speedways fundamentally play the same.

The much-needed breaks from this repetitive gameplay loop are few and far between. Of the six non-oval tracks, three are what I’d consider iconic circuits. These are Watkins Glen, Sonoma, and Road America. I realize 704Games was probably limited as to what it can do due to licensing, but there are other North American circuits that would have worked here. The likes of CoTA, Laguna Seca, and Road Atlanta would have helped a lot to vary up the repetition present in career mode.

Speaking of career mode, this is the core game mode found in NASCAR Heat 5. Here you are tasked with progressing through all four of the disciplines, starting as a modest dirt racer and working your way up to the grandiose NASCAR Cup.

During career mode, you have the choice to just be a standard driver and represents real-life teams or to create your own brand. The former is simple enough and has you focus purely on race days. In contrast, the latter requires you to manage your team, upgrade your staff, and micro-manage some elements to improve your car. This is by no means a complex team management simulation like you’d see in Motorsport Manager, but it does give you something to do in between race days. Earning cash and upgrading your team does provide noticeable benefits. Especially if you are playing with limited assists and on a higher difficulty setting.

Between races, there is also a social media system where you can respond to other racers’ messages. This is limited and more or less comes down to you giving a generic appreciative, insulting or apologetic response. These relationships don’t seem to have any impact on A.I behavior in races and the reputation system it does affect is bland.

There isn’t much else to say regarding career because it’s effectively a copy and paste of NASCAR Heat 4‘s. There’s little to no innovation regarding game modes and if you’ve played the predecessor, you already know exactly what to expect.

This is not a simulation

It doesn’t matter how many assists you have disabled or what set up you’re using, NASCAR Heat 5 will never be a simulation racer. Although it does qualify as a sim-cade, it hovers far closer to the side of an arcade than simulation. If you are looking for a difficult, realistic oval racing simulator then you’re better off looking at the likes of iRacing or rFactor 2 instead.

Unfortunately, even among other sim-cade racers, NASCAR Heat 5 doesn’t offer the best oval racing experience. To be frank, I’d much rather race Daytona on Forza Motorsport 7 than do just about anything in Heat 5. 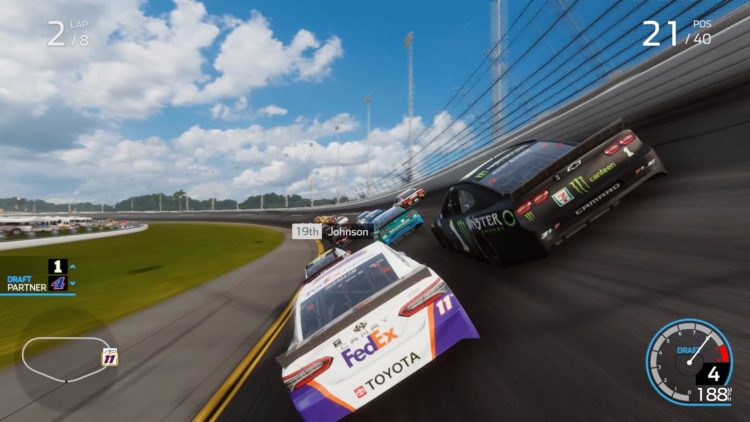 The main reason for this is that NASCAR Heat 5 doesn’t do a good job of demanding much from the user. This is most notable in the truck racing series where several speedways don’t even require you to let off of the throttle. In the faster Cup and Xfinity series, there’s more to do but even then basic racing aspects like your racing line and throttle control don’t matter as much as they should.

I’m also not overly keen on how little feedback is provided to the player when racing. For sure, the controller vibration when actively slipstreaming is nice, but other more important features are seemingly missing. Most notably, there are zero positional indicators to warn you of any nearby cars. In the day and age of Project CARS 2′s proximity arrows and Asseto Corsa‘s Helicorsa, I expect better.

At its best NASCAR Heat 5 is a pleasant looking racing game. It can’t compete with Project CARS 2, F1 2020, or Forza Motorsport 7, but considering this isn’t a AAA title like all of those it looks good. I was particularly impressed by the easy-on-the-eyes floodlight reflections during speedway races set later in the day, as well as its well-refined car models. Some of the environmental details are lacking a little but they don’t ever detract from the overall racing experience.

It’s a shame the same can’t be said for the performance. NASCAR Heat 5 is locked at 60 FPS meaning that I don’t get to make the most out of my 144HZ monitor. This is disappointing considering that the previous game wasn’t locked and ran just fine. If that isn’t enough, Heat 5 can’t even maintain its locked FPS. The whole point of locking your frame rate to a certain number is to provide a consistent experience. But here there are regular frame skips that can get headache-inducing rather quickly. Annoyingly, it doesn’t matter what graphical settings or resolution you set, these skips will not go away.

Truth be told, NASCAR Heat 5 is not a particularly good racing game. It’s not terrible either but in this extremely competitive genre, you’d do better playing almost any other mainstream racer on the market. Despite this and the game’s obvious flaws, that doesn’t mean there’s no reason to buy it. Heat 5 was clearly an awkward in-between generation game made to collect some extra funds for its sequel which looks likely to be the first Heat game in a long time to run on a brand new engine. If you want to believe in the future of the franchise and the potential of 704Games, pick this up. But if you’re actively looking for a racing game to play today, I’d look elsewhere.

Although not awful, NASCAR Heat 5 feels like a rehashed version of its already underwhelming predecessor. The small quality of life improvements do not make up for its disappointing lack of any meaningful innovation.