Last year, the original NBA Playgrounds shot its way onto the scene, formally revitalizing the dormant sub-genre of arcade basketball games. Personally, I was pleased with the game; I found it quite fun and more inviting than the more simulator-esque titles like NBA 2K. As for this year’s outing, Playgrounds 2, I still like it. However, some things are rather different, and a lot of these changes simply cannot be ignored.

For starters, you surely would have already noticed that the new Playgrounds is now also a part of the NBA 2K family, with its full title being NBA 2K Playgrounds 2. Just before its original launch, which was supposed to be summer 2018, Playgrounds 2 was delayed. At the time, we didn’t know why, but its resurgence a few months later with the ‘2K’ branding gave a pretty clear answer as to what happened. 2K Games’ formal backing of the new Playgrounds has brought with it some changes that are sure to make a lot of gamers upset.

Let’s just get it out of the way—yes, NBA 2K Playgrounds 2 does have microtransactions. It’s a sports game in 2018, and even more so, it’s a 2K-backed game in 2018. If it didn’t have microtransactions, that would actually be a surprise. The controversial coinage comes in the form of ‘Golden Bucks’. Players use these to buy loot box-esque card packs that contain clothes to customize your roster of players with, along with other items. But, that’s about it—nothing groundbreaking. Thus, you can avoid opening up your real wallet unless you really want to, especially since you’ll also earn these Golden Bucks in-game, albeit very slowly. That said, Playground 2’s economy has undergone even more changes.

One Step Forward, Two Steps Back

Like its predecessor, you unlock new players by means of the aforementioned card packs. Just as there are card packs for clothes, there are card packs for players. You buy these player packs using regular ‘Baller Bucks’, which the game awards far more generously than Golden Bucks. That said, unlocking new players does quickly turn into a grind-fest. The various tiers of character packs (bronze, silver, and gold) come at pretty high virtual prices, after all.

So, building your roster will take some time. The game locks the players with the best stats (called ‘Legendary’ players) behind Gold and Silver character packs. Thus, it encourages you to play continuously to rack up those Baller Bucks so you can buy more packs. As I said, this is much more grind-heavy than the original NBA Playgrounds. It doesn’t help that the “progression system” (if I can even call it that) is almost completely different this time.

In the original Playgrounds, you progressed through the Career mode by playing on various courts around the world. NBA 2K Playgrounds 2 does feature a new selection of global courts, but that ‘world tour’ from the original game is now completely gone. Instead, the only way for you to play on these courts is by competing in your own custom-made exhibition matches (which includes every court and custom ball already unlocked for you). You can also play the new courts by going online in the new ‘Championship Mode’. On that note, the online component of NBA 2K Playgrounds 2 is far more integrated than the original game. The only other offline modes are the new 3-Point Contest and NBA Season modes. 3-Point Contest speaks for itself, so let’s talk about the NBA Season mode.

Here, you pick two characters from the same NBA team and go against two other NBA players from the various teams during a season. Your goal is to reach the Playoffs and then the Finals. The thing is, you always play on the same stadium-like court. The only difference is that the team banners change depending on who you’re competing against. 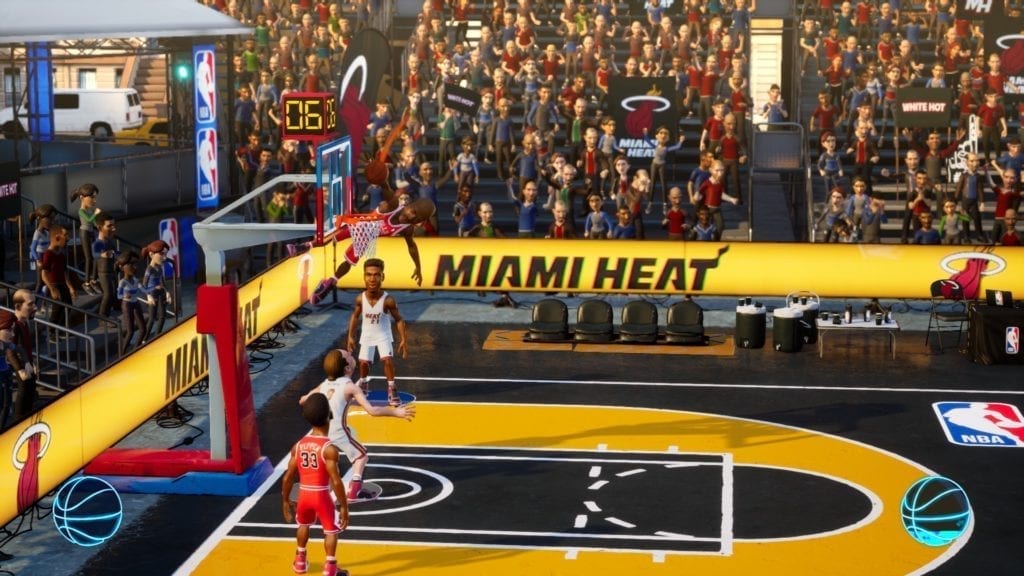 The replacement of a world tour-esque career mode with this new ‘NBA Season’ mode feels like a backward step. Not to mention, this is one of the few offline modes.

Rough Around The Edges

Thus, the ten ‘playground’ global courts are literally only reserved for offline and online exhibitions. This seems like a bit of a waste. After all, these courts do appear far better designed than in the previous game. They now feature more character models and background objects, which make the atmosphere of these courts more lively. Speaking of more lively, that also applies to the gameplay mechanics too.

Honestly, playing NBA 2K Playgrounds 2 feels like an interactive sports anime. Like the original, there are over-the-top dunks and special moves (only performed by the Legendary characters), along with a lottery-style power-up system similar to kart racers. But it’s all cranked up to 11 this time around. There’s far more visual flair with even more insane moves. They also appear to have smoother, more fluid animation than before. Between all the insane flips, tricks, and sick jumps, you cannot convince me otherwise that all these players have superpowers. There’s even a new camera mode tucked away in the options menu which shifts the view behind the players, which I find more adds depth to the scene and makes the amazing moves look all the more amazing. If real basketball looked like this, I’d probably be the biggest fan ever.

The gameplay also feels more balanced due to an improved shot meter, and adjustments made to the AI behavior (you can also select the difficulty level on your own). I’ve been having a lot more fun with Playgrounds 2 over the original thanks to these improved gameplay mechanics and visual elements. And, seeing that your players get better the more you use them (as they earn EXP points after every match), it’s certainly a good thing that the gameplay is a step up. But the other changes I mentioned earlier do put a bit of a damper on things—like the increased online element.

Playing online has actually been decent; I’ve only run into one dropped game so far due to a connection error. But, other than that, it’s been smooth. However, I can’t ignore the fact that one day the Playgrounds 2 user base is going to drop. And, if not before that, the servers will eventually shut down. Thus, if and when this happens, it will essentially nuke the whole Championship Mode when that happens. I find it baffling that I can’t compete in a real career-style match against AI players like in the first game. Sure, you can still make your own exhibitions as I mentioned, but those are just one-off matches. The offline Season mode is not the best replacement due to it being limited to the same generic court. So the only saving grace really is the improved gameplay. But, that is still a decent saving grace. 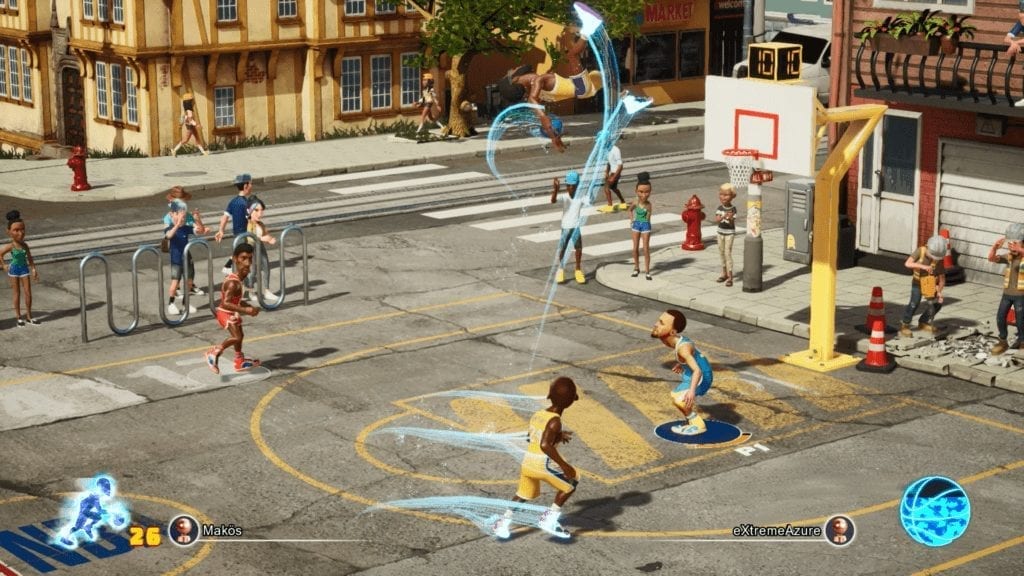 The improvements to the gameplay mechanics and visual elements do still help NBA 2K Playgrounds 2 to be a step-up over its predecessor.

Can You Handle The Heat?

If you can overlook the heavier integration of the online component and the microtransactions (which, again, are pretty avoidable), then there’s a really good chance you’ll still have a lot of fun with NBA 2K Playgrounds 2 regardless of whether you’ve already played the original or not. For me, as someone who knows next to nothing about basketball, I still find this more arcadey-style of basketball video game to be more engaging and far less intimidating than the “real 2K” (although I’ve found that I actually do like that series as well – check out my amateurish review of NBA 2K19). The sheer insanity of Playgrounds‘ on-screen madness truly keeps me motivated to come back to the game again and again. But it’s those few unnecessary, backward changes that keep Playgrounds 2 from becoming a true champion.

NBA Playgrounds 2 brings a lot of great improvements to the table with enhanced gameplay mechanics and visuals, but the package is brought down by unnecessary, backward changes.