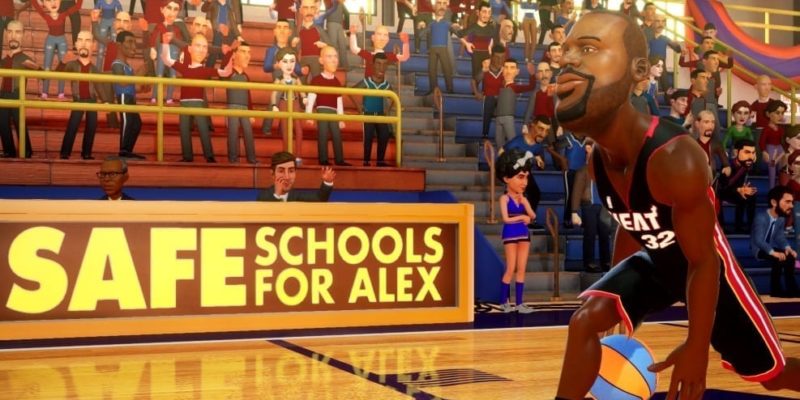 You might know the NBA 2K Playgrounds basketball franchise name. The game takes inspiration from previous arcade-style basketball games like NBA Jam. However, you might not know what the organization “Safe Schools for Alex” is. I know I didn’t before writing this.

This non-profit was created by Max Schachter to honor his late son, Alex, who was one of the 17 victims in the Parkland, Florida shooting. The program helps schools in creating safe atmospheres for students. The Safe Schools free update for NBA 2K Playgrounds 2 will help with co-opting this fundraiser by raising awareness for the program.

There are quite a few features flying in with this fundraiser’s downloadable content. The update will include a custom court specifically made for the event. Other additions include new in-game celebrity and influencer voice tracks. “We are honored to be able to use our platform to give back to such an important cause,” said Matt Karch, CEO of Saber Interactive. “Max has been my friend since childhood, and I’m very proud of all that he is accomplishing on behalf of children across America in honor of his son, Alex.”

One of the biggest standouts regarding the update is a new music track being added to the game. The song, titled “25 or 6 to 4,” was originally made famous by rock band Chicago. Now the Marjory Stoneman Douglas High School Jazz Band has recreated it. Better yet, it features rapper Robert Matthew Van Winkle, better known by his alias, Vanilla Ice.

The Safe Schools free update for NBA 2K Playgrounds 2 will launch on March 7. Developer Saber Interactive and the game’s publisher, 2K, will match all donations made to Safe Schools up to $100,000. “Our mission is to make schools a safer place, and we couldn’t do it without the support of these companies, as well as the people around the country that believe in us,” said Max Schachter.

For more information about the organization or to donate, click the official site here.