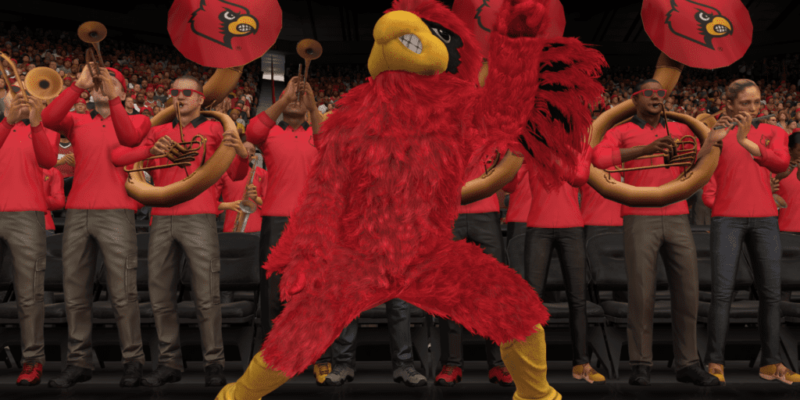 Let’s get something established here: I know almost nothing about the sport of basketball. After spending a few hours with NBA 2K17 on PC, my basketball knowledge has probably tripled. For example, I now know the terms ‘Small Forward’ and ‘Slasher’, and I know Utah has a team called The Jazz. Not bad for someone who previously got all his basketball information from school PE lessons and Barkley, Shut Up & Jam: Gaiden (revelation #1: real basketball doesn’t actually feature any zaubers).

My frame of reference may only extend to parody slams and jams, but I was still fully prepared to engage with NBA 2K17 as best I could. As somebody whose sports game experience is firmly rooted in planet football (be that FIFA or Football Manager), it was pretty fascinating to get a look ‘The Big Title’ for a completely different sport. It’s also an ideal chance to see how this series translates to the PC in terms of options and performance.

First up, the ever-popular graphics options. You can click any of the images in this piece to enlarge them. 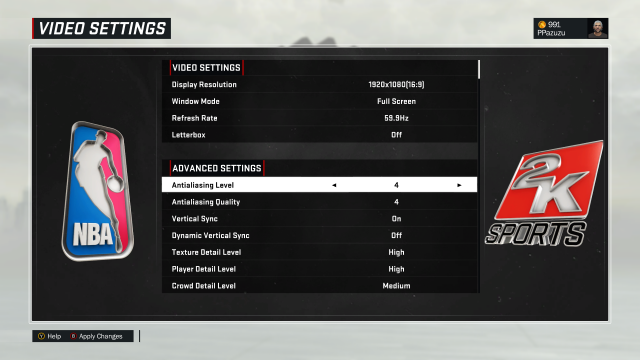 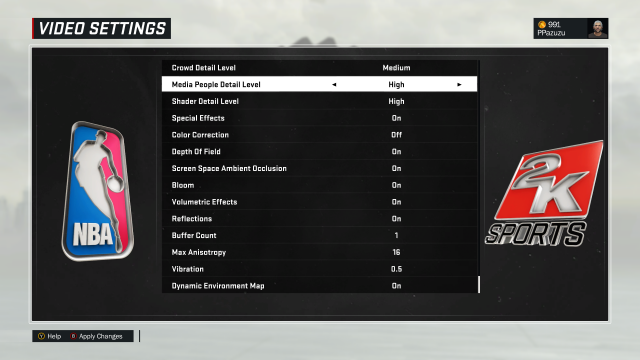 Resolution support goes up to 4K (I don’t have a 4K monitor, but 3840 x 2160 shows up and is usable with down-sampling). NBA 2K16 had 21:9 widescreen support after patches; I can’t personally verify if NBA 2K17 has it out of the box, but this Reddit post would suggest it does.

Fullscreen, borderless windowed, and regular windowed modes are all present. In offline mode there’s no obvious frame-rate cap, so if you opt to turn v-sync off the sky should be the limit (I think I saw it top out at about 240 during low-stress loading screens). Online play does have a cap, of 60.

Anti-aliasing uses a somewhat oblique number system (where 1 may actually just mean “none”), which correlates with how high you can boost the companion number under AA Quality. The maximum is 8/16, but 4/4 seemed to work out at a reasonable quality-performance compromise for me. With the level set to 2, the in-game stuff looked alright but the menu typeface picked up some odd jagged edges.

V-sync speaks for itself, while dynamic v-sync does that thing where if your frame-rate drops below 60 (say), then it’ll switch to capping at 30. 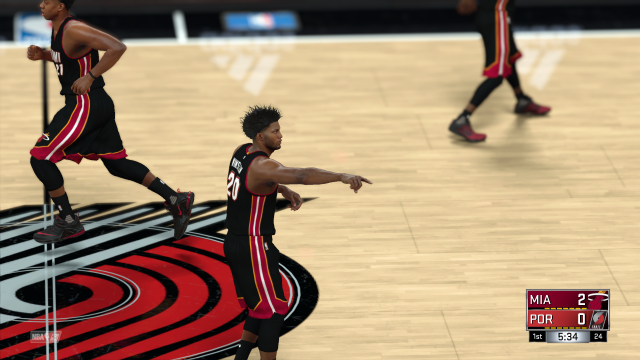 Look, over there, more stuff about graphics settings!

The majority of the Detail Level related options offer Low / Medium / High, with the exceptions being Shader (which also has an Ultra setting) and Crowd/Media People which you can set to Off. This will, indeed, entirely remove the crowd from the stadium (and make the prancing mascots look very lonely and silly). You’ll still hear crowd noise though.

‘Special Effects’ covers all the Bloom, Reflections, SSAO, Depth of Field stuff. You can toggle these individually, while Special Effects itself acts as a universal on/off switch for everything. Max Anisotropy acts a little unusually, offering either 1 or 16 with nothing in between (but since AF is relatively light on performance demands these days, 16 should be the default for the majority of people).

I’m less clear on what Buffer Count does (obviously something to do with frame buffering, but what, precisely, I’m unsure). After reading around, it sounds like setting it to 1 was helpful in preventing stuttering in prior NBA 2K releases. Didn’t seem to make much difference in NBA 2K17, and I didn’t notice any increase in input lag between 1 and 3. The vibration setting controls whether your controller vibrates like a snoozing bear or swarm of bees. Finally, Dynamic Environment Map is another one I’m fairly unclear on, but is something to do with texture maps and meshes. Probably. Maybe. Leave it on for best results, anyway. If you’re incredibly ambitious or committed to using a keyboard in all things, there are keyboard inputs for NBA 2K17. These can be rebound to new keys, as can the controller inputs (which I found helpful, since the pass/shoot buttons here are reversed from FIFA and that was causing muscle-memory to betray me). Problem is, a lot of the more intricate tricks and movements in the game are performed with the right analogue controller stick; and no matter what you switch the keyboard controls to, you’re not really going to be able to replicate ‘rolling an analogue stick through 360 degrees’.

You can switch freely between keyboard and controller on-the-fly, but the UI is inconsistent about which buttons and icons it decides to change to keyboard symbols. Honestly, I can’t really imagine playing this game on keys, but the option is semi-there.

Since it’s a sports game, NBA 2K17 has endless gameplay customisation menus for camera positioning, whether you take control of coach team-talks, sliders for tweaking the default difficulty settings, and so very many more things to toggle and alter to your liking. At first I thought the PC version had some sort of weird earthquake simulator bug during free throws, but this turned out to be a camera vibration setting. Actual glitches haven’t shown themselves to me in the few hours I’ve spent looking the PC version; though some are evidently present (and platform agnostic). Another oddity I’m aware of (but haven’t encountered) apparently involves invisible arms on certain players. Slightly disappointed not to have seen that one yet, it would’ve made for a fine screenshot. 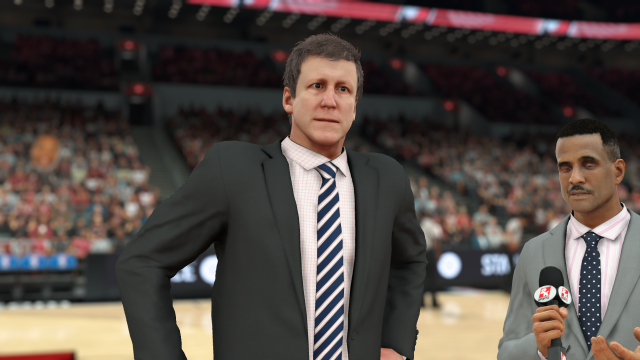 Performance in the actual games has been a smooth, solid 60fps with most of the settings at their highest (max AA will murder my machine, and at one point I experimented with putting Crowds down to medium but that didn’t really change much). In cut-scenes and mid-match breaks, though, there are plenty of dips to the 40s or upper 30s. This tends to happen when the camera zooms in close on a player, coach, or media guy. Since it doesn’t affect the actual games themselves, I’ve not spent hours trying to figure out which particular settings would need to be lowered for 60fps throughout at the ‘best possible’ quality.

The sledgehammer approach of reducing everything to its lowest point certainly did the trick (at least confirming that those cut-scene dips can be overcome), but, well, it makes NBA 2K17 look like this. Make sure you enlarge this shot for the full aliasing nightmare experience. 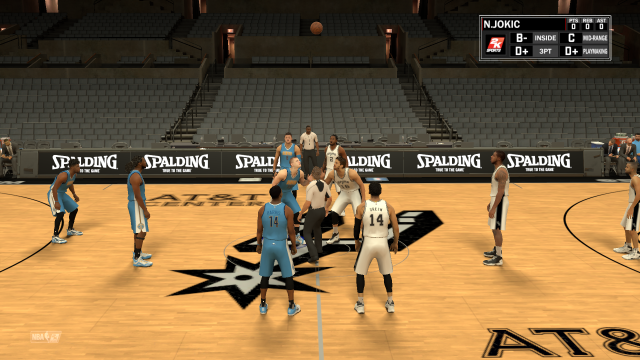 Still, it’s always a positive when games can scale to that extent.

As I mentioned at the start, it’s interesting coming to a completely unfamiliar sports title and comparing it with ones you know. FIFA 17’s efforts to add a narrative ‘Journey’ spin to Be A Pro makes perfect sense after playing through some of NBA 2K17’s MyCareer. Having an actual character, plot, and clear goals to aspire to, makes all the difference when giving extra weight to the story of ‘your’ player. Having your guy step out onto court for his first professional NBA game and actually seeing some of that is a lot more interesting than receiving a personality-free email in FIFA saying you’re in the starting XI this week. It also helped that my created Pro ended up looking like an unholy mix of Geralt and Jon Snow. 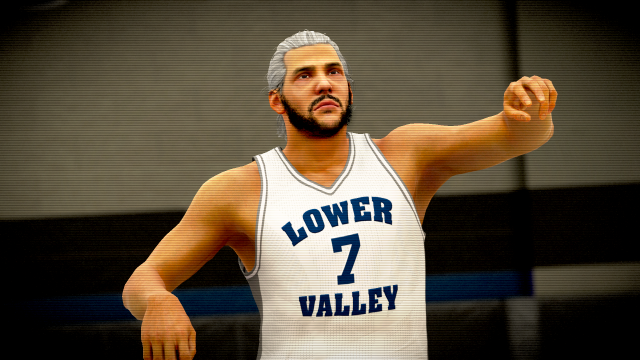 Maybe a Chaos Dunk can defeat the White Walkers, have you considered that?

An in-depth review of the mechanics and changes in NBA 2K17 would be futile for me, since I’m not familiar with the prior titles at all. What feels like a decent physics system with convincing body momentum to me may just be absolutely standard in these releases. Or maybe it’s slightly improved/degraded from 2K16. I have no way of knowing. Likewise, aspects like commentary seem much more insightful here than they do in FIFA games. But I bet that’s because the information is all new to me; NBA 2K devotees may just as sick of it as I now am of FIFA’s inane wafflings. Something I’m definitely sure about though; the UI for substitutions is some kind of bizarre Illuminati symbol.

Looks like this game shares the same grind for virtual currency as parts of FIFA too. That said, it does award you (small amounts) of VC for doing literally anything and everything, so perhaps that wracks up faster than it first appears. 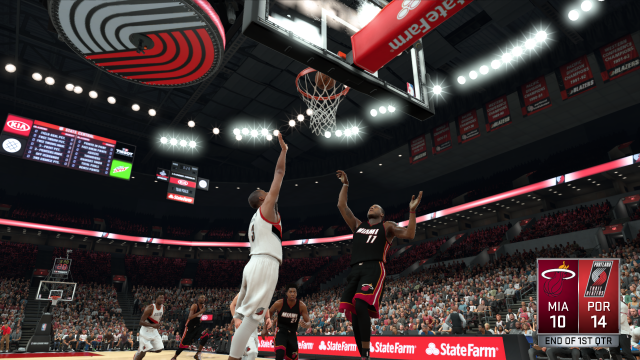 Basketball or interpretative dance: you decide.

In terms of its transition to the PC then, NBA 2K17 gets pretty high marks. Performance is solid where it counts (in the actual games), and I suspect that with more GPU horsepower I’d be forcing those fluctuating cut-scenes into 60fps too. There’s support for specialist desires like 4K and 21:9 aspect ratios (something you don’t see in all titles, by any means), and the game also appears capable of scaling the other direction. Sure, the ultra-low setting consequences of no crowd, flat textures, and jagged edges everywhere don’t look pretty, but it’ll give people with much older hardware a shot of actually playing. 2K’s inclusion of (remappable) keyboard controls is welcome too, even if a keyboard is really not the optimal way to play this game.

I’m absolutely not the right person to ask about whether NBA 2K17 is a major step forwards, backwards, or sideways for the series as a whole, but as total neophyte I’ve been impressed by what I’ve seen. Besides an online player pool that’s going to be smaller on PC (because that’s just how it goes with major sports titles), there’s every reason to consider this version if you’re musing over platform choices.