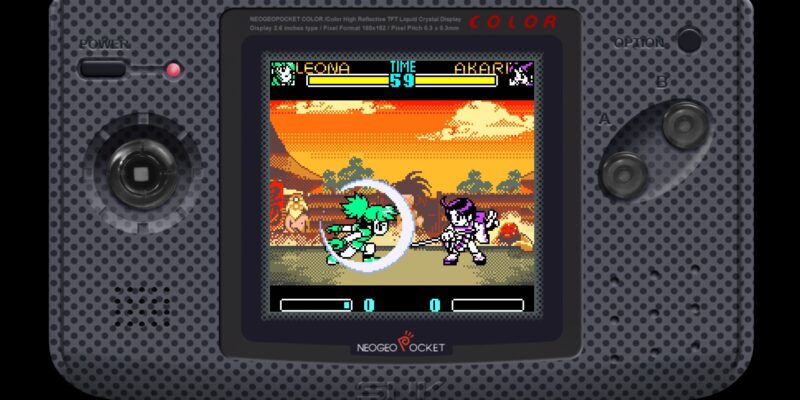 Earlier this year, Neo Geo Pocket Color Selection Vol. 1, a collection of ten games hailing from SNK’s short-lived handheld system, arrived on Nintendo Switch for fans of retro gaming to enjoy. And now, PC players can join in on the fun, as an updated version of the collection, dubbed Neo Geo Pocket Color Selection Vol 1 Steam Edition, became available on Steam yesterday. Some may look at this collection, which consists largely of fighting games, and struggle to see how these titles could play well on limited Game Boy-esque hardware. But make no mistake; many of these games play nearly or just as well as their console counterparts.

By purchasing the collection, players get instant access to five fighting games in the form of SNK Gals’ Fighters, Samurai Showdown! 2, King of Fighters R-2, The Last Blade: Beyond the Destiny, and Fatal Fury: First Contact. Other games in the collection include Metal Slug: 1st Mission, Metal Slug: Second Mission, Dark Arms: Beast Buster 1999, Crush Roller, and Big Tournament Golf. Players can look at the manuals for each game as well as the 3D models of the game boxes and cartridges. Additionally, color options and local multiplayer also exist for select games.

Where is SNK vs. Capcom?

This collection offers plenty to satisfy classic SNK fans. But the eagle-eyed among them will notice the curious omission of SNK vs. Capcom: Match of the Millenium. Many fans of the Neo Geo Pocket Color consider that game one of the best on the system, and the Nintendo Switch version of the collection included this beloved title. Although the Steam version did replace the game with Crush Roller, it is doubtful that fans will see that title as a worthy substitute. Fortunately, SNK released SNK vs. Capcom alongside this collection as a standalone release, so PC players can still experience the game if they wish.

Ultimately, Neo Geo Pocket Color Selection Vol 1 Steam Edition is absolutely worth buying, especially for fans of retro gaming. Players can purchase the collection for $31.99 USD until October 6, after which the game will cost the standard $39.99 USD. Those looking to play SNK vs. Capcom can do so for $7.99 USD.