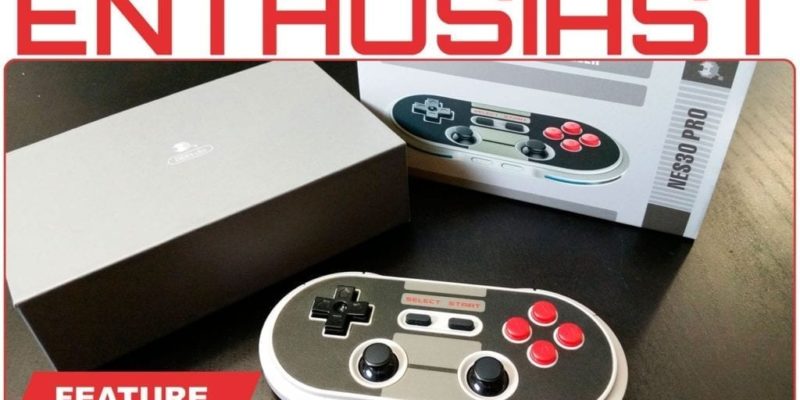 I was debating whether to post this review on our sister site, Nintendo Enthusiast, or this one given that the NES30 Pro Controller is aesthetically geared towards the Nintendo fan but technically built for PC and mobile gaming. So I cheated and put the unboxing video there and the review here.

Let’s start off with the actual build of the NES30 Pro Controller.  As I previously mentioned it has an SNES like inspired design to it with the rounded corners and the ABXY button layout on the front but uses the NES look of black and gray with the red buttons.  While the inspiration is there the controller is noticeably smaller which works well given that this is a controller you’d want with you on the go.  Size aside, two small analog sticks are also located on the front of the controller much like the Playstation controller design although these sticks are also reduced in size to fit the compact design. On the bottom edge of the controller are two subtle buttons which are used to power on the controller and the second which serves as a reset button of sorts to re-pair the wireless link. Along the rounded edges on both sides are LED lights which change colors depending on which mode the controller is in. Atop the controller you’ll find the L1/R1 and L2/R2 shoulder buttons as well as a micro USB port to charge and physically connect your controller.

The controller itself feels pretty solid and well put together.  The buttons themselves are somewhat stiff and have a strong clicking sound to them when pressed.  Some people might prefer this over soft press buttons but I feel that with enough wear these buttons might get stuck in the pressed position. Note that I haven’t experienced this in my brief time with the controller so far.  The analog sticks are smooth, responsive and can be pressed down for an additional input.  Finally the start and select button are made of a rubber like material which feels exactly like the original NES controller.

For my playtests I tried the controller with a Samsung Galaxy S5 as well as hooked it up to my PC to try different types of games on Steam.  Pairing the NES30 Pro Controller to my phone was as easy as pairing your phone with any bluetooth device.  For playing any kind of roms on your phone or tablet, the controller worked perfectly.  It’s much easier to play classic games using an actual controller versus a touchscreen and the controller is small enough that you can slip it in your pocket and take it on the go.  The controller can also emulate touch screen controls so that you can use the NES30 Pro with any mobile game as well.  However you’ll have to get ROOT for Android or Jailbreak for iOS and download a special app. I personally wasn’t too comfortable with that idea so I wasn’t able to review this feature.

Next I tried different genre games on Steam using this controller such as platformers and fighters.  This is where the controller starts to suffer since it’s now competing with full size controllers that can do a much better job.  The NES30 Pro just feels too small for proper gaming sessions on Steam.  When I rest my hands on the controller, my right thumb ends up resting on the right side of the d-pad. This results in the player having to practically hold the controller with their fingertips to properly play games.  In contrast, first party controllers from Sony, Microsoft and Nintendo are all designed so your thumbs rest comfortably on the analog sticks and can easily reach d-pads or buttons just by moving up or down.  For slower paced games the controller gets a pass since if you haven’t invested in a console controller, this does the job.  If you’re hoping to use this for fast paced games however, prepare to get hand cramps as it’s just too small for adult hands.

Lastly the manual for the controller does state that the NES30 Pro can be paired with a Wii console.  After following the instructions several times, I managed to pair it with my Wii U running in Wii mode but never managed to get a game working with it.  There is a video over at 8Bitdo’s Youtube channel showing the FC30 working with an original Wii so it could be that the NES30 Pro is slightly different, that it doesn’t support the Wii U or that my controller was defective.

The NES30 Pro is a nice looking controller and if you’re a collector of Nintendo themed products, this might make a cool addition to your collection.  It’s a nice compact controller for anyone looking to enhance their mobile gaming experience on the go.  If you’re just looking to buy something to play games on Steam however,  steer clear of this one.  At the time of writing the NES30 Pro Controller sells for $50 on willgoo.com, the main supplier, which is the same price you’d pay for a much more comfortable controller.

By Lawrence Le4 days ago
Reviews

By Jacob Roach5 days ago
Hardware

Zombie Army 4: Dead War review – A too familiar trip to the grindhouse

By Stefan Bahruth5 days ago0
Reviews

Through the Darkest of Times review – resist to exist