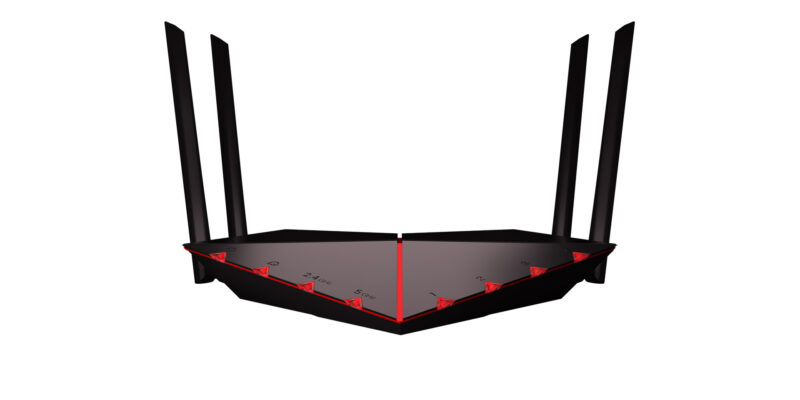 Competitive multiplayer gaming is hugely popular today due to the thrill of competition that comes from it. Just like real sports, that competition presses players to look for ways to gain advantages over opponents. One common approach is to get a gaming PC capable of high refresh rates that’s also configured with minimal system latency. However, this solution is expensive and only accounts for part of the latency equation. Establishing a quality network connection is of equal importance. At its core, networking is very complicated, though, and many of the tools available to users often go unused due to a lack of accessibility. Netduma set out to change this with its DumaOS software, which is now utilized in Netgear Nighthawk routers and provided as a subscription service via certain ISPs. Additionally, Netduma sells its own R2 gaming router with the DumaOS built in, and that’s what we’re reviewing today.

The DumaOS is without a doubt the key selling point of the Netduma R2 gaming router. This powerful, easy to use software allows you to see server locations for your favorite games and measure ping, then choose which ones you want to play on. It even allows you to customize rules and reject laggy players for a better online experience. Want to stop other players on your home network from hogging the bandwidth for things like video streaming? You can also prioritize gaming applications so you always get the bandwidth allocation you need. Suddenly, routers don’t sound so boring after all, do they? But is the Netduma R2 the right router for gaming on, and is it the right one for you?

The Netduma R2 was built primarily with a gaming audience in mind. In that regard, it should be an adequate device for most. The software built into the R2 is something to admire, though the hardware may not be sufficient for power users. We’ve listed the basic tech specs below and will break down what you need to know about this device to decide if it’s right for you.

The Netduma R2 is fairly basic when it comes to hardware. The company admits to this and doubles down on the belief that DumaOS is what provides the real value. Given the reasonable expectation that most competitive gamers will use wired ethernet connections in tandem with this latency-focused device, the hardware specs are fine for the price. Still, anyone buying a wireless router will more than likely also want to use it to connect to the rest of their devices.

The R2 is dual-band capable at 2.4 GHz and 5.0 GHz, just like most other routers. You can set your devices to work on the lower bandwidth (300 Mbps) 2.4 GHz band and benefit from more range or go with the 5.0 GHz band (867 Mbps) for devices closer to the R2. We’ll get more into the wireless performance in a later section.

As for how practical this router is for most wireless devices, it mostly depends on the bandwidth service provided by the ISP. Since this is just an AC1200 router, it will present a bottleneck for those with gigabit connections and those who like to do high-resolution streaming on a wide range of devices simultaneously. If you regularly perform large file transfers across your home networks, you will want to look for something more high-end as well. The AC1200 rating is still good enough for most, though. If your wireless network usage is limited to just internet browsing, light-weight work tasks, and perhaps even several simultaneous 4K streams, you’ll still be fine. 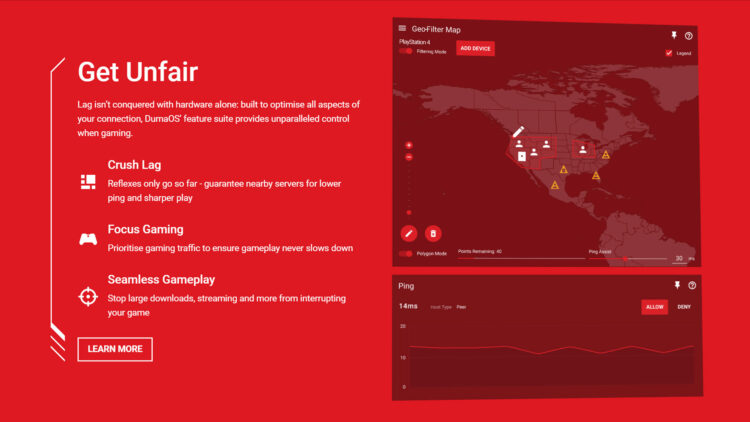 The DumaOS software offers the real meat of the package with its geo-filtering, ping heatmaps, QoS settings, VPN support, traffic rules, ad block support, network monitoring controls, and built-in connection performance benchmarking. Most potential buyers are likely interested in the gaming features, as the R2 promises a better overall experience, but we found the additional features to be pretty handy as well.

Additionally, the Netduma R2 measures about 6.5 inches tall from base to antenna and radiates little heat. The design is sleek, featuring a low profile aside from the protruding antennas. The surface panels are matte black with red accents. This makes it somewhat forgiving when accounting for aesthetics and placement within a room. However, it only comes in a single color option.

The Netduma R2 is easy to set up and has what you need for basic internet connections, but offers serious value through its superb software platform which lets you get more out of your network. The features all work as advertised and make online gaming more enjoyable. While the price does feel a tad high for the hardware specs, it's still a great value compared to the other routers that feature the DumaOS. For those that don't, there's no comparison. This is a true gaming router.

Away: The Survival Series review — Keep away from me