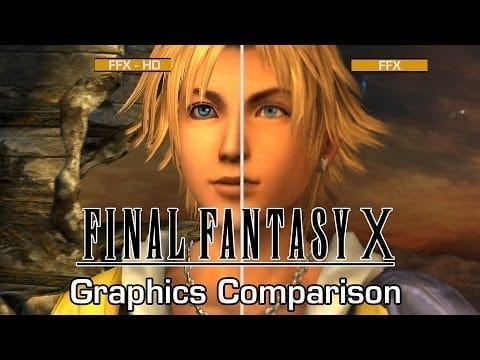 The HD remastered version of Final Fantasty X and X2 are less than a month away from being released.  With this being said Square Enix is determined to let the fans know what changes and additions hese games have in store. There will be one disk containing both Final Fantasy X and X2 for the Playstation 3 and the Vita will have a single download as well.

New features on Final Fantasy X/X2 include enhanced visual quality of gameplay,  re-arrangements of the original Final Fantasy X and X2’s background music, new trophies, and even cross save compatibility. The start menu will have include a data transfer option allowing you to continue game play from at home on your console to on the go via Playstation Vita. Cross save compatibility is exactly as what it sounds like it would be. If you last save your game on your Vita, it will load on your console and vice versa. An audio drama and concept art has also been included. This has upset some fans and yet has pleased some others. However, you can be the judge for yourself. If you turn out to not be a fan of the audio drama and concept art, fear not as the new additions to the content of the actual game will certainly make up for it.  They have added an expert sphere grid, Dark Aeons and Penance, Final Fantasy X eternal calm CG, Psychic and Festivalist dress spheres and even your own creature creator. Oh yea, and did I mention that gorgeous visually enhanced gameplay 🙂

Final Fantasy X and X-2 HD Remaster will launch in North America on March 18th for the Playstation 3 Console and Playstation Vita.