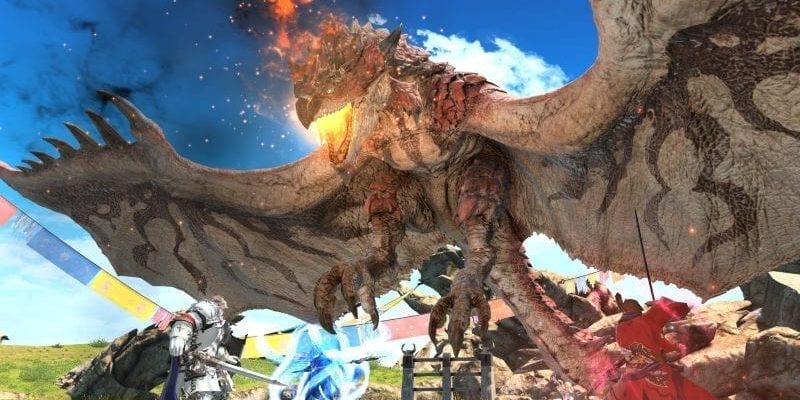 The battles in FFXIV Online and Monster Hunter: World are notorious for their difficulty and length. It’s only fitting that Final Fantasy XIV Online brings some of those epic fights to its realm. The newest patch for Final Fantasy XIV Online (4.36) adds “The New King of the Block” quest. Here you can jump into “The Great Hunt” trial and face the Rathalos. If you’ve completed the Stormblood expansion you can immediately start the hunt.

For those wanting an additional challenge, you can head to “The Great Hunt (Extreme)” which pits four players, instead of eight, against the new monster. There are also other “obstacles” promised in this mode. Are you wondering what exactly you obtain when you accomplish this mission? There is a new Rathalos armor set, new mount (Rathalos), BBQ spit, along with Poogie and Palico minions.

Aside from the crossover character, there are also additions to The Forbidden Land Eureka series with The Pagos Expedition. There is a new area to explore, among buffs to Eureka weapons and new rewards in the form of minions.

By Kevin Carignan15 hours ago
Features