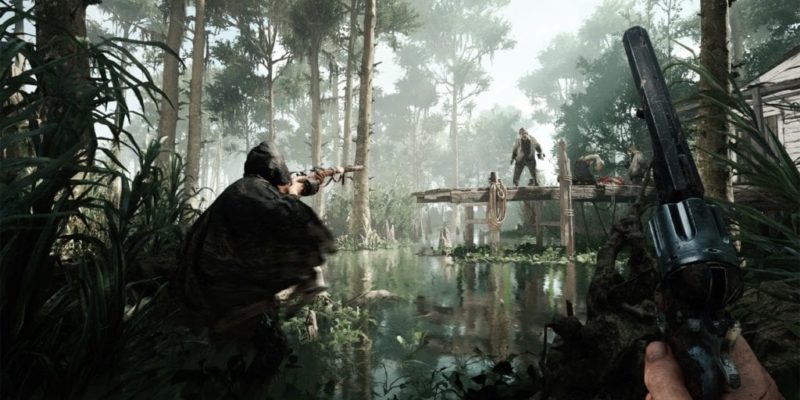 Hunt: Showdown is growing just outside of the limelight. The competitive first-person shooter casts players as bounty hunters who specialize in banishing supernatural creatures. Since first launching on Steam’s Early Access platform in early 2018, the Crytek-developed shooter has continually added new features and iterated upon the game’s tense framework. And with the most recent Hunt: Showdown update, it continues to get bigger and better with each passing month.

Crytek pushed Hunt: Showdown‘s latest update through on Monday, just three weeks after its 2.0 update. Monday’s patch, dubbed Update 2.1 adds a wealth of new content. It’s gameplay-focused, with numerous tweaks to how the game’s weapons work, but there are plenty of other quality of life tweaks, too.

Update 2.1 introduces new weapons ideal for stealth-minded players. The crossbow comes in three different forms. The “old-school” crossbow can take down enemy players with a single bolt. Hand crossbows are smaller than their old-school cousin but are designed to work in conjunction with the game’s sidearms. Rounding out the crossbows is a poison variant that fires bolts with exploding poison tips. It’s ideal for encounters with monsters but can also distort the view of enemy hunters.

In addition to crossbows, both the Sparks LRR and Winfield rifle now have optionally mounted silencers. The silenced versions of both weapons have reduced damaged rates as a trade-off for their reduced sound profiles. Rounding out the stealthy guns is the Specter 1882. Although it doesn’t have a silencer, the pump-action shotgun has a built-in bayonet that’s useful for stabbing any undesirables that survive the gun’s deadly blasts.

The update also adds throwing knives. They function as a tool; a silent option for players who’d prefer not bring weapons with silencers. Rounding out the new weapons in update 2.1 is the Combat Axe. According to the patch notes, it operates like the game’s Wood Axe but isn’t throwable. It’s useful for hacking away at any enemies that get too close for comfort.

Hunt: Showdown‘s new weapons come alongside some enhancements to gunplay. Crytek stated that alongside back-end changes like “improvements made to the responsiveness of hit registrations,” the studio also modified the game’s most popular weapons in update 2.1. The Winchester remains a powerful weapon capable of downing an enemy in two shots but now does reduced damage to limbs. Players wielding The Dolch, Hunt: Showdown‘s dominant handgun, now have less ammo to work with. According to the developer, this decision was made to help balance The Dolch in combat encounters. Finally, Vitality Shots — consumable health boosts — are more expensive and have a longer cooldown. This decision comes alongside update 2.1’s new Weak Vitality Shot, which restores less health but is cheaper and faster.

Update 2.1 isn’t just about new guns and improve gunplay, however. It also adds a foggy weather variant. Crytek’s shooter is already atmospheric and tense as hell, and the fog’s reduced visibility is sure to keep players on edge as they move through swamps and dark forests.

Rounding out update 2.1 are new Hunter traits and a Spectator mode. Hunters can now use the “Bolt Seer” trait to highlight crossbow bolts and throwing knives, which is especially useful in foggy weather. The “Bolt Thrower” trait reduces crossbow reload time, which lets hunters fire off more shots from the deadly weapons.  Spectator mode, as the name implies, allows Hunt: Showdown players to watch the rest of a game through their partner’s eyes in cooperative matches.

Hunt: Showdown‘s frequent updates indicate that Crytek is dedicated to supporting the game. A look at Crytek’s planned development roadmap suggests significant changes coming to the game for months to come, including a “critical” damage system and an all-new character progression system. Hunting monsters and demons might not be pleasant work, but Hunt: Showdown‘s constant updates sure make it enjoyable.