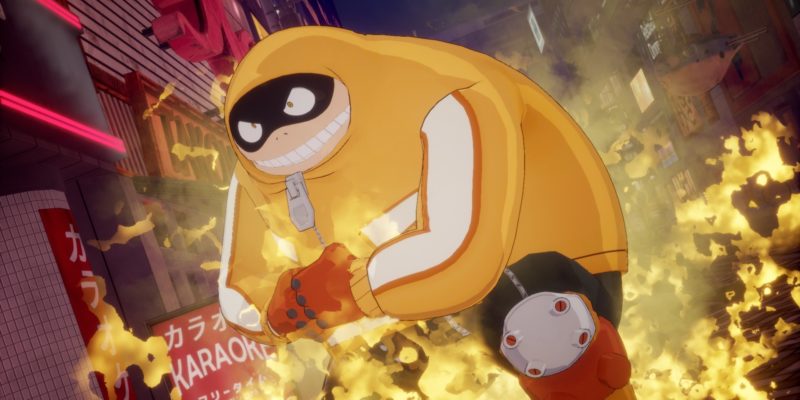 Seiji Shishikura is one of the top students at Shiketsu High School. He uses his Quirk, wonderfully named Meatball, to manipulate his flesh and that of his opponents. As you can see from the My Hero One’s Justice 2 trailer, he can turn bits of his flesh into large projectiles or fists to assail his opponents with. Plus, he can incapacitate enemies by kneading their flesh into disfigured lumps.

Camie Utushimi is far more laid back than her counterpart, Seiji. And she likes to keep an air of mystery around herself. This attitude matches her Glamour Quirk, which allows her to create illusions from a smokey substance she emits from her mouth.

Gang Orca’s Quirk has mutated him to look like his namesake, an orca. An unfortunate turn of events, but on the plus side he has enhanced strength, heightened senses, and he can produce hypersonic waves to paralyze his opponents.

It wouldn’t be My Hero One Justice 2 if things didn’t get a bit bizarre. So, following on from the guy who looks like an orca, is a guy who can absorb anything into his body and uses his fat to subdue enemies. BMI Hero: Fat Gum is as tough as they come, able to withstand most attacks thanks to his Fat Absorption Quirk. He can also store kinetic energy and convert it into muscle when he goes on the offensive.

Sir. Nighteye is a genius-level intellect whose Quirk, Foresight, allows him to see a person’s future. As you can see in the My Hero One’s Justice 2 gameplay trailer, when he fights he throws Hyper-Density Seals at his opponents. They’re basically office stamps, which Sir. Nighteye finds hilarious.

My Hero One’s Justice 2 is coming to PC on March 13 and you can pre-purchase the game via Steam for some bonus cosmetics and characters.