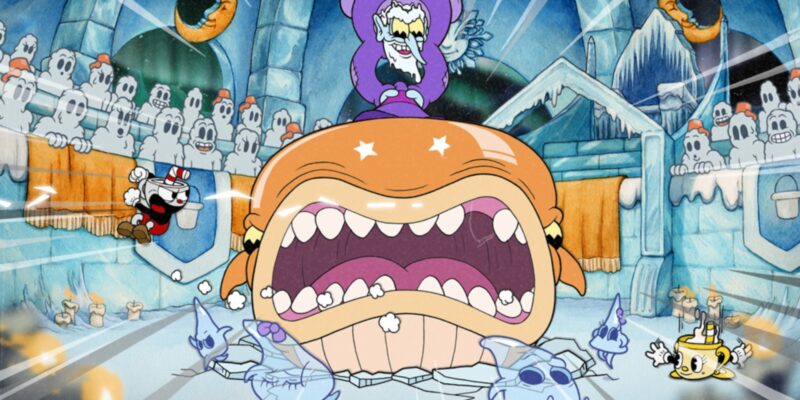 During E3 of 2018, developer Studio MDHR unveiled the DLC expansion for the beloved 1930s-cartoon-inspired boss rush game Cuphead, titled The Delicious Last Course. Since then, though, the studio has shown very little else about the expansion, which makes sense considering the amount of work it takes to fully realize its cartoon aesthetic. But today, at The Game Awards, the silence has finally broken. A new trailer for Cuphead: The Delicious Last Course just dropped, and the release date is confirmed for June 30, 2022.

Most of the trailer consists of a charming puppet show starring Cuphead, Mugman, and newcomer Ms. Chalice. They embark on a journey to “DLC Island,” where snowy mountains, sunny deserts, and dastardly foes await. This puppet show also features “Chef Saltbaker” from the debut trailer, and it implies that his cookies can grant the trio of heroes extra firepower in boss encounters.

The remainder of the trailer shows more of the boss-battling gameplay that players fell in love with back in 2017. It features more footage of the red-nosed giant from the debut trailer, as well as a host of never-before-seen opponents, which include a flying magician wielding a giant whale and a chess knight who, appropriately enough, happens to be a horse. However, the trailer did not confirm whether the run-and-gun levels from the base game will return, so players who enjoyed those stages will have to wait at least a bit more for that.

It feels great to finally see more footage of Cuphead: The Delicious Last Course, and it feels even better to see an official release date for the first time. The original Cuphead remains one of the most charming and rewarding games in recent memory, so the fact that the DLC expansion will come out relatively soon will no doubt be music to many fans’ ears.

Thirsty Suitors is a multi-genre mashup game from Outerloop Games