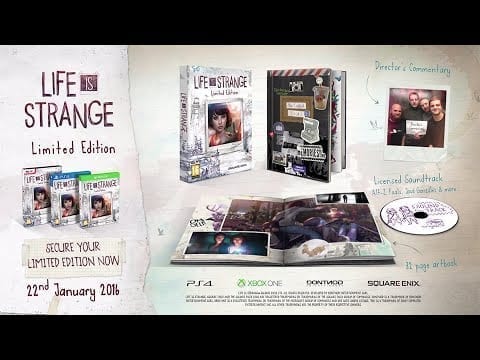 If you had not the chance to play Life is Strange until now, you should think about purchasing the official Limited Edition of the game that will come to PC, PlayStation 4 and Xbox One. Square Enix officially announced the upcoming package that will include all five episodes on disc, along with the full Life is Strange soundtrack, plus the original score by Jonathan Morali, director’s commentary and a very interesting 32 page artbook that will include unreleased concept art.

The following trailer will definitely bring back memories to everyone who enjoyed the entire five-episode saga, but the rest should not be afraid of checking out the video, since it does not contain any spoilers.

The Life Is Strange Limited Edition will launch on January 22th with an excellent price tag and Square Enix confirmed the PC version of this boxed edition that will be sold exclusively through their online store.

The disc will include subtitles in German, Italian, Spanish (Castilian),Spanish (Mexican) and Brazilian Portuguese. You can pre-order now on their official website or take a quick look at our reviews of each episode:

By Mike Straw35 mins ago
Hardware