In the grim darkness of the future, there is only war. But that’s the 41st millennium. It’s possible to have new video games for circa M3, right? Well, not to worry because Focus Home Interactive has that covered well before the Dark Age of Technology begins. The publisher has partnered with numerous studios to create new games and IPs, some of which are based on Games Workshop’s Warhammer universe. Which particular universe is it? Well, all signs point to Warhammer 40K and Age of Sigmar.

From left to right, you’ve got Streum On Studio’s (Space Hulk: Deathwing) next game which depicts a hardened fighter. The fella isn’t one you’d want to meet in a dark alleyway, and he doesn’t look like just another clerk for the Inquisition. Given the “Descend, assassinate, collect” blurb, he might be a member of the Officio Assassinorum instead, and you’ll be blasting your way in a shooting game.

The next one shows a symbol every Warhammer fan is familiar with: The double-headed eagle, or the Imperial Aquila from Warhammer 40K. Saber Interactive will be developing this title. They’ve already got their hands full with World War Z which releases next week, and their next two projects for Focus Home Interactive will be quite ambitious as well, as detailed by a post from the official forums:

The first title developed by Saber and born after extending its partnership with Focus, will be a totally new and ambitious IP, consisting in an amazing coop game that will benefit from all the talent and the experience of the studio in delivering spectacular, fun and entertaining games.

Their second title may be the most ambitious project in the publisher’s history – a AAA-quality experience supported by one of the most important licenses in the Games Workshop universe.

The third and final one is from Gasket Games which has former Relic employees (Dawn of War). That “Rise, invade, conquer” quip hints at a possible real-time strategy game. This time around, it’ll be set in the Age of Sigmar universe because of that Sigmarine, err, Stormcast Eternal standing there. This offers a massive opportunity to explore the new setting given that we haven’t really seen a slew of Age of Sigmar video games. Well, there’s a card game, so that’s that.

Outside of Games Workshop’s licenses and Warhammer, Focus has also renewed and struck partnerships with other developers. DONTNOD Entertainment’s Vampyr has recently seen success, selling over one million copies. The particular blurb — “Return, expiate, uncover” — might mean a Vampyr sequel or something else entirely.

Asobo’s A Plague Tale: Innocence might not have Skaven, but there’s something that’s brewing. Deck 13 (The Surge) will also kickstart a new franchise. Meanwhile, Sumo Digital (Dead Island 2, Team Sonic Racing, Crackdown 3) will have a multiplayer game set “in a dark universe with uncompromising elements.”

New indie studios have also linked up with Focus. Limestone Games from Estonia and Lightbulb Crew from Paris will be coming up with new titles for the publisher. Last but not least, Focus will have a ten-year exclusivity deal which allows them to publish games based on Chaosium’s Call of Cthulhu franchise. 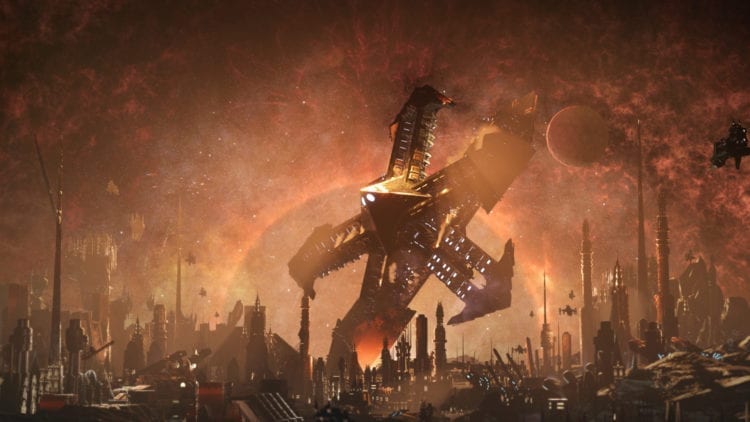 The future isn’t looking so grimdark for Focus Home Interactive and these developer studios. A number of titles are due for release in these coming weeks and months. Likewise, previous offerings — such as Tindalos’ Battlefleet Gothic: Armada 2 — packed quite a punch. It’s chugging along just fine, with numerous updates such as co-op mode and the first season for competitive matchups.

Still, time will tell if these new projects would receive a “Just as planned!” exclamation from Tzeentch, and if they’d also be worthy of The Emperor’s blessing. Then again, some might also stumble along the way, like that time some dudes decided to drop in on Isstvan V.