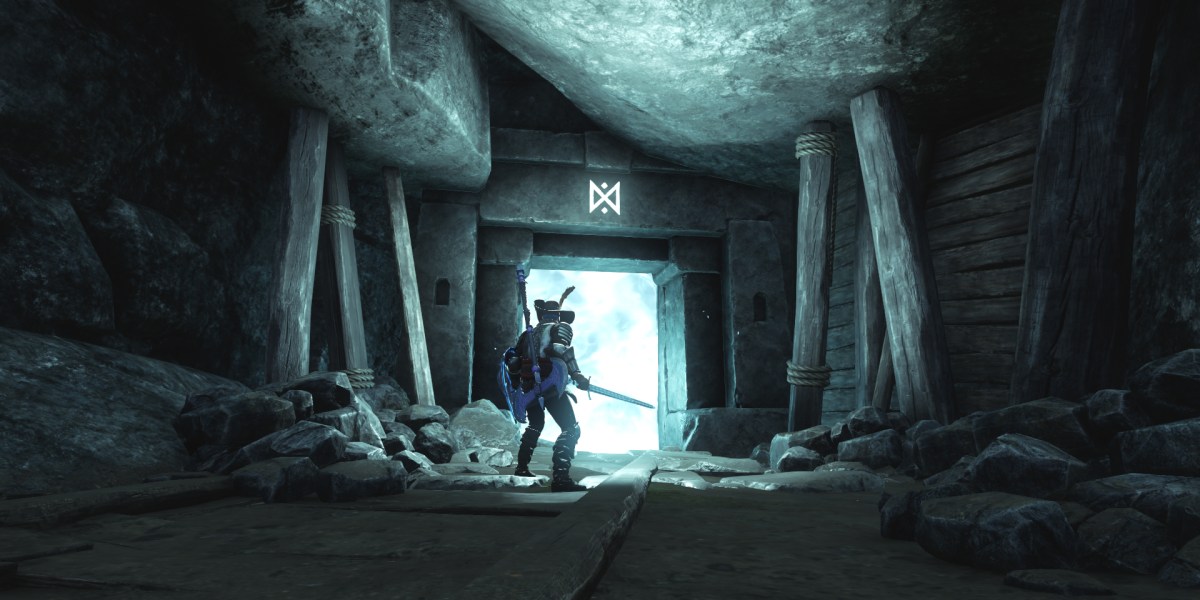 Amrine is the first Expedition (dungeon) you will encounter in New World. In other MMORPGs, the first dungeon can be an intimidating prospect. But, as I mentioned in my New World beginners guide, the Amrine Expedition is a walk in the park. There’s only one real challenge. But, there are some things you don’t want to miss.

To enter the Expedition, you will need an Amrine Tuning Orb. You will be given one of these when you get the Destiny Unearthed, Foreman’s Ledger, and Seeing Clearly quests. Only one member of your party needs to have a key to open it for everyone. I first ran the dungeon at level 25. You really don’t need to be higher than that. One person in your party will need a tier-one Azoth to open doors.

The most essential tip in this New World dungeon guide, is that you’ll need to take a healer with you into the Amrine Expedition. This is the first time in the game a healer is mandatory. The other four members of your party can all be damage dealers. A tank is nice to have, but for this dungeon, it isn’t a necessity. A DPS in heavy armor will more than suffice. 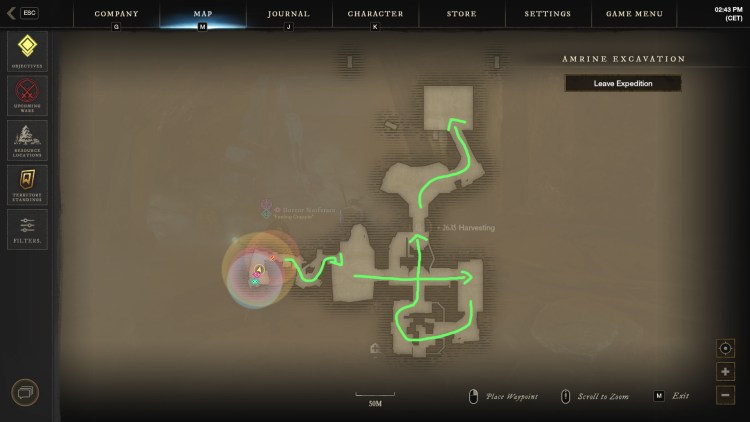 This is the route you will take through Amrine.

The main reason to run Amrine, other than the narrative, is for the loot. The boss at the end, Simon Grey, has the best loot. However, there are chests scattered throughout the dungeon that will also offer you solid rewards. You will find all the chests along your path through Amrine, except for one. There is a chest hidden in the waterfall in the central Grand Traverse area. See the images below to help you find it. 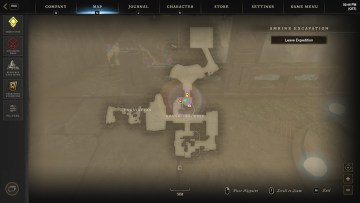 Here’s the location of the chest on the map. 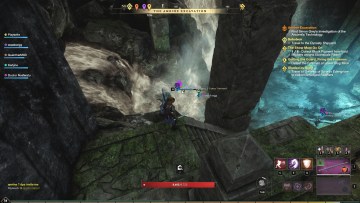 This is what you’re looking for.

As I mentioned above, none of the enemies you encounter are particularly tough. There are a few pesky ghosts that move quickly, and when you encounter nests, make sure you kill those first because they spawn more zombies. But, the only foes you need to be a little mindful of are the Star Excavation Ravagers. These big boys pack a punch. So, kite them if you’re not wearing heavy armor. If you are the heavily armored member of the party, try your best to draw aggro. Everyone should use charged heavy attacks when possible to break their stamina bar and disable them. The Star Excavation Ravagers will drop bones, which you need for the Bones for Barkimedes quest. 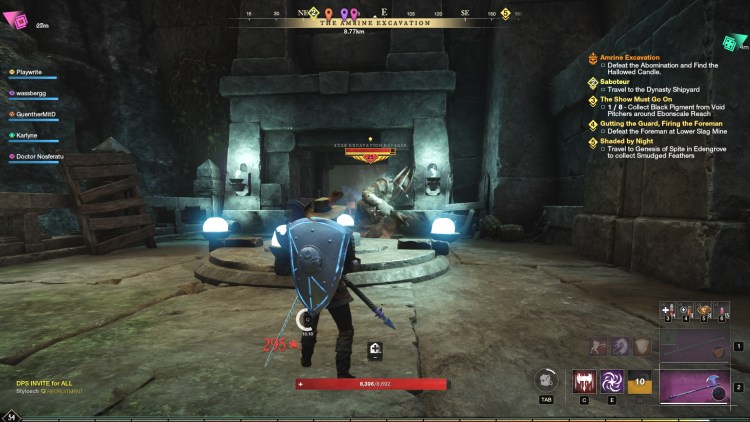 As you progress linearly through Amrine, there’s literally no way to get lost, you will eventually loop back to the central Grand Traverse area. When you do, you will need to complete the only puzzle in the dungeon, and it’s not a tough one. You need one player to stand on the central switch, one to drop down stand on the right switch, and another to take the stairs down to the left switch. When you do this, the bridge will be activated. However, a few enemies will spawn too – one of them a Ravager. You should draw all these enemies to the central switch area and deal with them as a group. 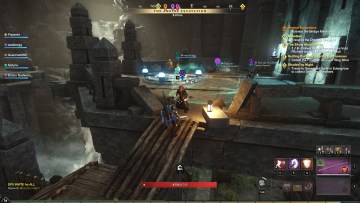 The central is on the main platform. 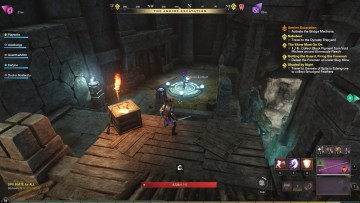 The left switch is where you went down to the secret chest. 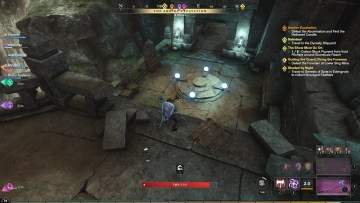 The right switch is just below the central platform.

This purple ghost is the only mini-boss of note in the Amrine Expedition. However, he still shouldn’t be a problem for you to deal with. But, you can make your life easier by knowing how to react to his main ability. Foreman Nakashima will occasionally place a large purple ring around one player. Any players caught inside the ring need to stay within it until it disappears, or all players will be stunned. While inside, you will need to try and dodge the spawning ghosts. You can simply dodge out of the ring and take the stun if it will prevent you from taking more damage. Your healer can also focus healing into the ring and you should be more than fine. 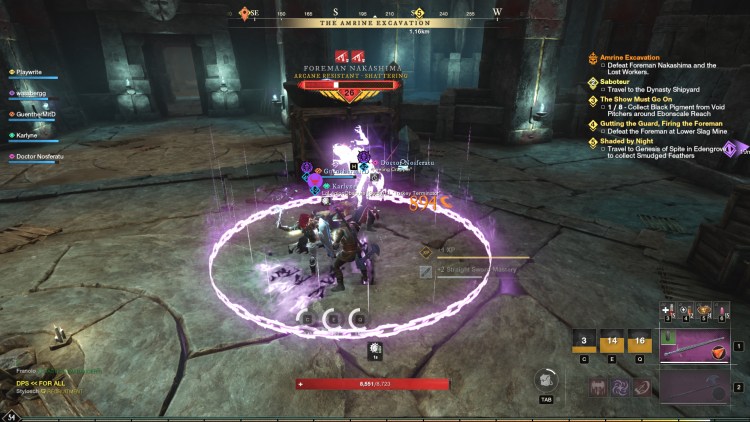 A good strategy for this mini-boss is to spread out and use ranged attacks. One melee DPS can get close to him. Again, this will make your life easier but it is not required.

Simon Grey is the main boss in the Amrine Expedition. This is the only point where you may struggle, because, he hits hard. He has a swipe attack and a slam attack. You should always try to block or dodge the slam. Simon will also occasionally summon minions to aid him. Your tank or heavy armor DPS should try to round them up and kite them to Simon, so your team can deal damage to them all at once. The other DPS should focus their attention on the minions to remove them quickly.

The main attack you need to watch out for in this boss encounter is Simon’s vomit. Getting hit with this, or standing in the puddle left by the attack, will inflict you with Disease. This is just going to make your healer’s job more difficult. So, try your best to avoid it. 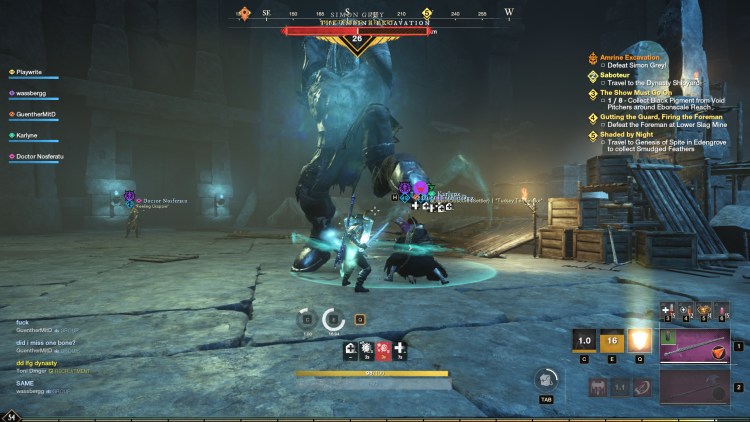 As with Foreman Nakashima, an effective strategy is to use ranged attacks and kite when necessary. Leave your one heavy DPS or tank to fight in melee range. If you have more than one melee DPS, make sure the ones who are not being targeted by Simon stand behind him. This will allow them to avoid taking damage and deal double damage through New World’s backstab mechanic.

Once you defeat Simon, make sure you grab the final chest before leaving the dungeon. Congratulations, you completed the first Expedition via the Amrine dungeon in New World.