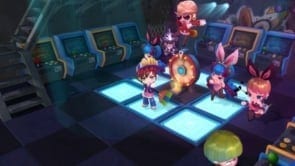 Nexon recently revealed the first gameplay video for its upcoming MMORPG MapleStory 2. Captured directly from the game engine in its Alpha state, the video highlights how the game will play in full 3D, including sequences of combat, skills, new environments and boss fights. New gameplay elements to the MapleStory franchise including wall-climbing, swimming and driving are also showcased.

Following on from this asset release, Nexon Korea has announced its plans to recruit MapleStory 2 supporters who will be invited to an exclusive ‘Supporter’s Day’ in late June, where they will get to see the game as well as discuss its progress with the developers.

MapleStory 2 is a new PC online full 3D MMORPG that has been in development since 2010. Set in an era prior to MapleStory, players can enjoy a completely new level of freedom in their experience. The footage released today showcases some of MapleStory 2’s diverse gameplay elements.

MapleStory 2 will enter closed beta in Korea in 2014 with a worldwide release schedule to be confirmed at a later date.