EA Canada’s NHL series is part of what I like to call the Golden Trio of sports games. Alongside Fifa and 2K Sports’ NBA 2K, NHL is a wonderful example of what a sports simulation can be. Perhaps even more than the other two, it looks like, feel likes and screams all things ice hockey as soon as that rink comes into view and the skates glide across the ice.

In short, it’s one of the very best.

Being the best presents a problem; how do you improve things, add things and tweak things without destroying the balance that made it so brilliant in the first place. You can’t just release the same game with updated rosters (although Madden showed you can go damn close to that), but you’ve got to do so without pissing off everyone that liked it just fine how it was. 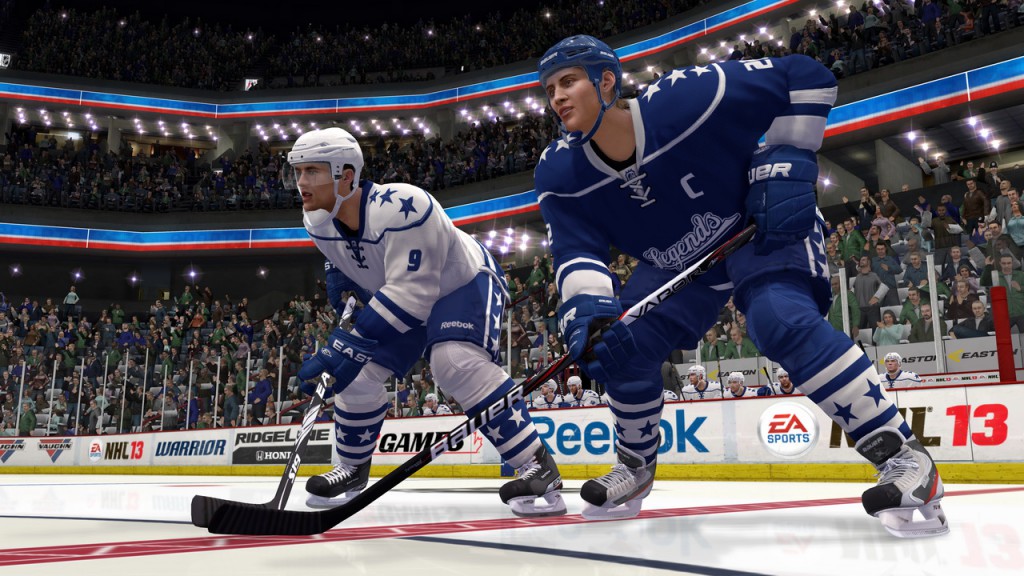 If time has taught us anything, though, it’s that EA Canada has a deft touch when it comes to these things. Year on year they manage to rebalance the gameplay without losing the core supporting elements that the series has built its reputation upon. Things are no different this year, with skater movement and AI getting the bulk of attention.

The way a skater’s momentum is reproduced is much more realistic and provides a greater sense of the free-flowing nature of the sport and gliding over ice in general. In particular, it’s a player’s ability to turn that has the most immediate impact – no longer can you simply turn on the spot and set off at a ridiculous rate of knots. Turning arcs must be planned for when working a new position, forcing you to play more intelligently when it comes to working within certain zones (especially when defending).

Acceleration, top-speed sprinting and the rate at which skaters can stop is also more realistic and creates much greater diversity between players. Now you really appreciate different players for their ability to move across the ice, rather than simply for their shooting, tackling or passing skills. In power play situations, for example, bringing agile players into the game on offence can yield significant rewards as the outnumbered defence tries in vain to keep up and hold their ground.

It’s nice to see something as seemingly basic as the way a player moves have such a noticeable effect on the way the game plays and feels.

Not all player movement elements have been upgraded, though. Collision animations still feel canned, resulting in slight delays between impact and the poor sod on the end of it slamming onto the ice or crashing against the boards.

It’s something that’s especially noticeable during replays thanks to the in-your-face camera positions and slow-mo. The NHL series is so far ahead of most other sports game franchises in most areas, but the collisions are certainly lacking when compared to Fifa or the new physics used in Madden NFL 13.

Sure, the effect of a body check or unplanned decision is still satisfactory, it’s just unfortunate that the visual execution doesn’t match the gameplay outcome.

EA Canada has boasted that there has been more time spent on NHL 13’s AI system than there was in the past three games combined. While the improvement may not match the claim, there is definitely an improvement – at least as far as the goalies are concerned. 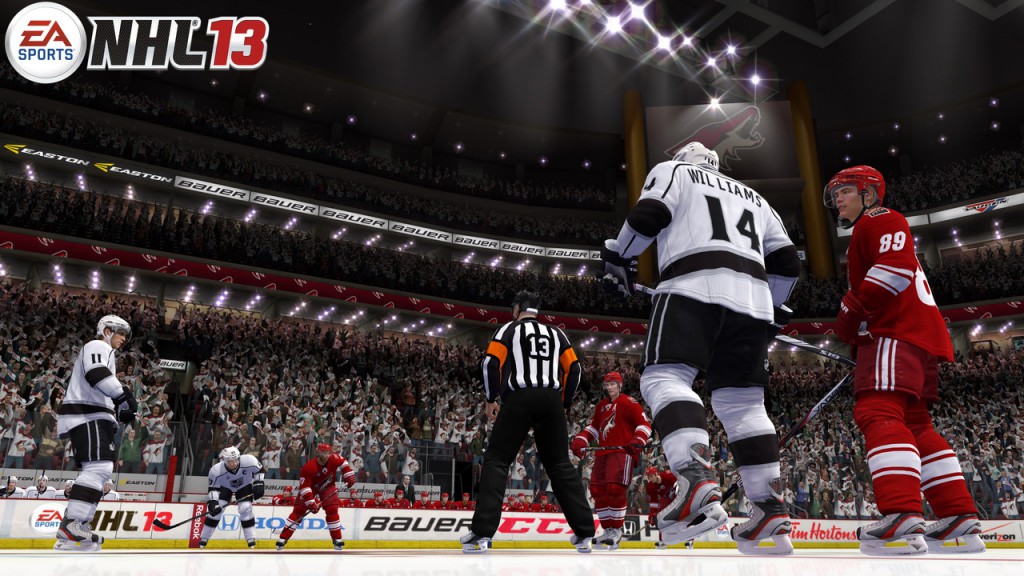 Unlike other sports featuring a shot stopper of some form or other, goalies in the NHL are prized possessions. Kids grow up wanting to be the next Henrik Lundqvist or Martin Brodeur. It’s a far cry from soccer where whichever kid is crappest at the game ends up in goal. Therefore, it’s nice that NHL 13 features goalies that actually seem to have a degree of intelligence to them.

Goalies are now aware of the players around them, rather than just the puck carrier. The result is that they position themselves better when it comes to defending two-on-one opportunities, taking away the ability to abuse quick shots from passes across the face of the goal. Of course, it’s still possible to score quick shot opportunities, but it’s no longer a sure thing and forces you to come up with new plays and attacking options.

The goalie’s ability to monitor the positions of players creates another interesting, and unexpected, effect. Whereas in past games the goalie would hug whichever post the puck carrier was closest to (in a bid to cut off the angle), they now move slightly towards centre if another player is about to crash the net and take a pass. This gives the attacker more opportunity to have a shot themselves, the goalie essentially outdone by his reading of the game and worrying about the potential threats.

As with the improved skater movement, it creates a much more free-flowing and diverse game; one in which there are many more options to play in a style that suits you.

New game mode additions have been taken pretty much wholesale from other EA Sports game, but are nonetheless very welcome. NHL Moments Live provides bite-sized challenges that ask you to recreate (or alter) dramatic scenarios from past games, just as you’ve been able to do for a couple of years in the Fifa series.

On the disc are a number of NHL Moments from last season, while Moments from the 2012-2013 season will be added as and when they happen. They act as a nice diversion from the exhaustive season, playoff and career orientated modes that dominate the game’s menus.

Speaking of exhaustive modes, NHL 13 sees the inclusion of the brand new GM Connected – a game type that is almost identical in ambition to Madden NFL 13’s Connected Careers. The idea is to role all the game’s various Be A GM, Season and Be A Player modes into one enormous whole… and then put it all online so that you experience it all with friends/foes/strangers/weirdos. 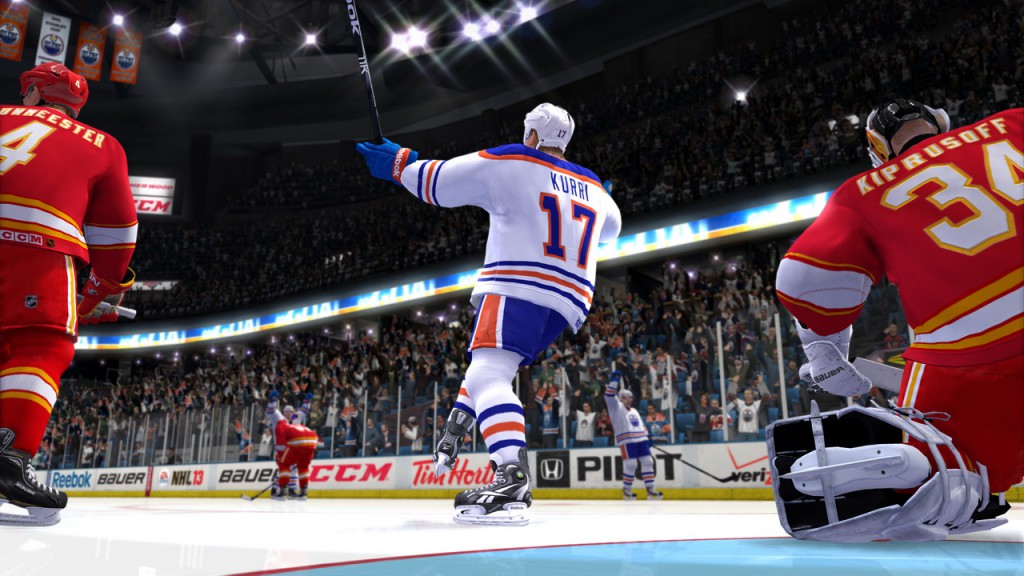 You can choose to play as either a head coach, in which you take control of a whole team and take care of everything in the dressing room (depth charts, trades etc) as well as on the ice, or as an individual player. The fact that (if you fully populate your league) every team is controlled by a real flesh and blood person elevates the tension and desire to win to the point where even the smallest trade or injury becomes a major event.

Yes, it’s fun to win against the computer, but winning against someone who feels the sting of a good trash talking is always better. Even games against the AI (if your league isn’t fully populated) are more meaningful because of the impact they can potentially have on other human players.

Because of the high commitment level required to fully enjoy and immerse yourself in GM Connected you’ll want to join a league that fits with your play style – most importantly how long you want to play for and how realistic you want the rules to be. If you want the chance to trade your way to a team of superstar talent, you’ll need to look for a league without a salary cap. If you want to be able to play those superstars in every game, select the league with injuries turned off. If you don’t fancy playing the same team seven times in a row, select the league with short playoff series lengths.

Whatever you do, make sure you play with others that you’re confident will have the drive and desire to see things through to the end. Nothing worse than playing in a league in which half the players have given up and stopped playing before the playoffs have even started.

As has been the story for the past few years, NHL 13 is a genuine improvement over past seasons. GM Connected alone makes things seem completely different and fresh thanks to the sheer volume of content and the fact that everything rotates around the actions of real people. I’m almost afraid to say it, but this is the kind of thing that sports game MMOs should be made of.

In a more general sense, all sports sims should be made of the kind of stuff used to construct NHL 13. It’s smart, satisfying, engaging and incredibly rewarding. The combination of realism, wide variety of game modes and a constantly evolving AI means that, once again, it’s going to be extremely difficult to find yourself a better sports game this year.

Read our interview with the EA Canada development team.

By Greg Bargas5 days ago
Industry