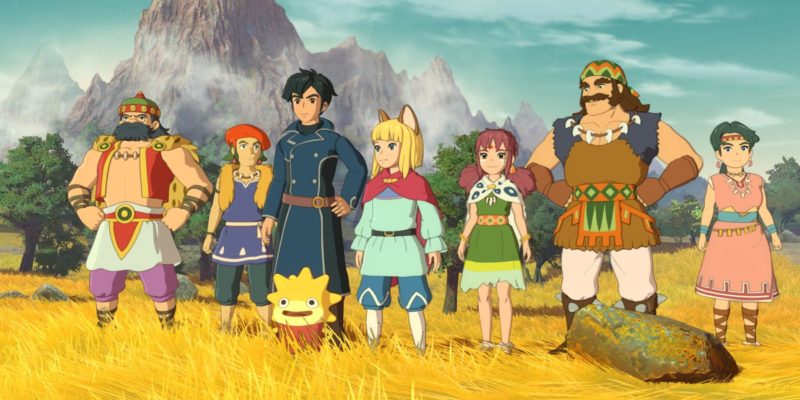 I did not have high hopes for Ni No Kuni 2: Revenant Kingdom‘s PC version. It’s not that I expected it to be bad, per se; it’s just that after Final Fantasy XV‘s largely superb PC version – which was clearly designed with the PC in mind, rather than being a rough port – I was expecting something… well, mediocre at best. A version that would look bad by comparison, if nothing else.

I was wrong. Ni No Kuni 2‘s PC version is also absolutely stellar. Apparently, 2018 may be the Year of the Genuinely Good JRPG PC Versions. (Except for Chrono Trigger.)

As ever, I’ll start out by noting that I’m in an i7-3820 with 16GB RAM and a GeForce GTX 1080 Ti, which means I have a computer that can arm-wrestle a demigod. Take that into account when I start talking about framerates and things, I suppose.

Also, as ever, let’s have a look at the options. 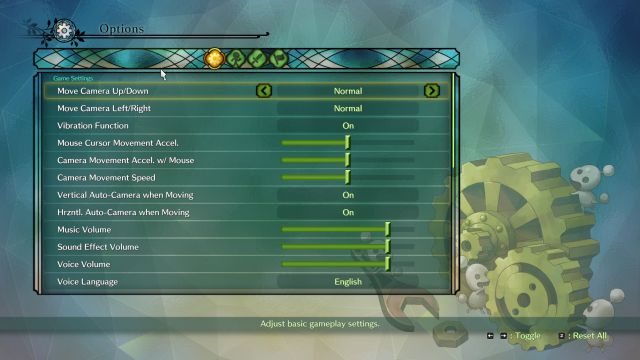 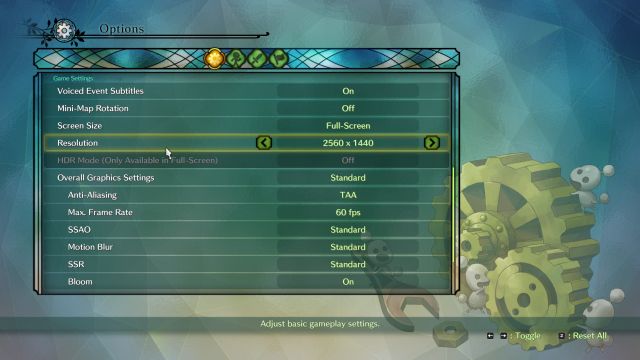 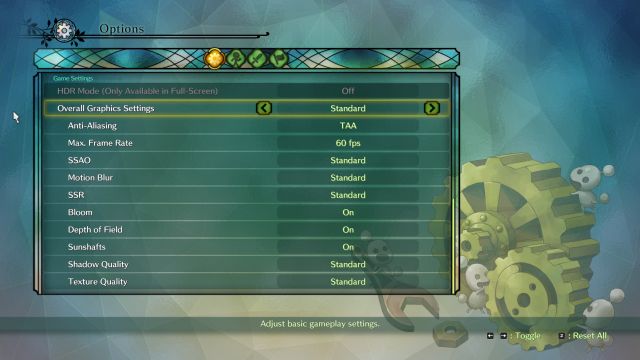 Basically all of the non-keybind options are shoved into one menu, which contains the usual suspects in terms of subtitles, volume stuff, mouse sensitivity and the like. In a nice touch, there’s also an option for English or Japanese audio.

Around here, though, we’re more interested in graphical scalability. Ni No Kuni 2 will happily run in Windowed, Borderless Windowed, or Fullscreen, and supports an unlimited framerate in addition to 30 FPS and 60 FPS caps.

There’s nothing too out-of-the-ordinary in graphical settings, but it’s nice to see that a lot of the “personal taste” ones are there – Depth of Field, Bloom, Motion Blur, and the like. That aside there are various types of Anti-Aliasing, and Shadow and Texture Quality can be upped or lowered as you like. There’s also an HDR Mode, if your monitor is fancy enough to support it.

So, how does Ni No Kuni 2 look? How does it compare between high and low settings? And how does it run?

Well, it looks absolutely bloody stonking, as the comparison shots below should show. 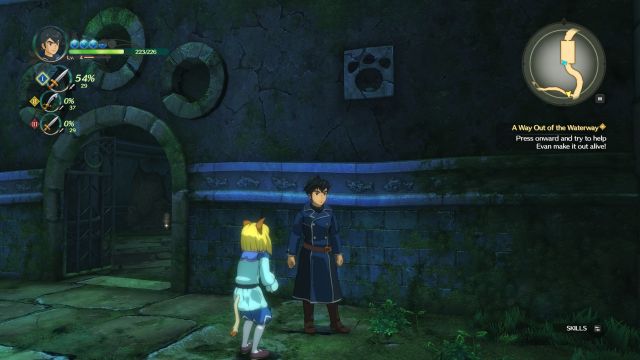 This is definitely on high. 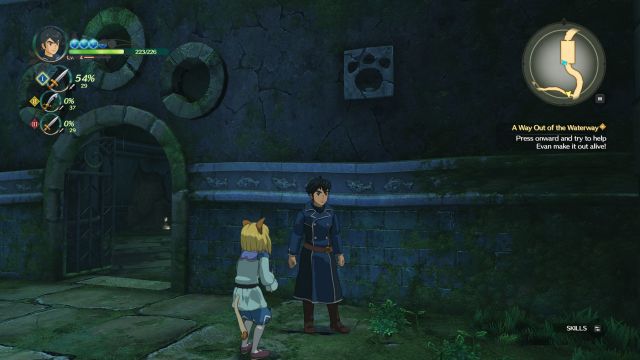 And this is definitely on low. 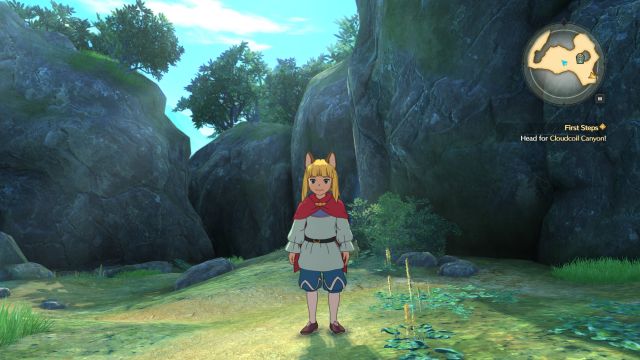 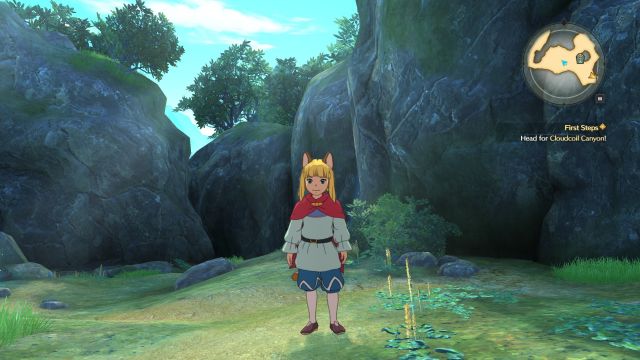 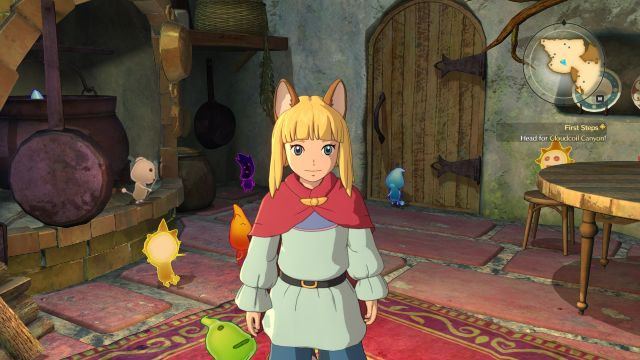 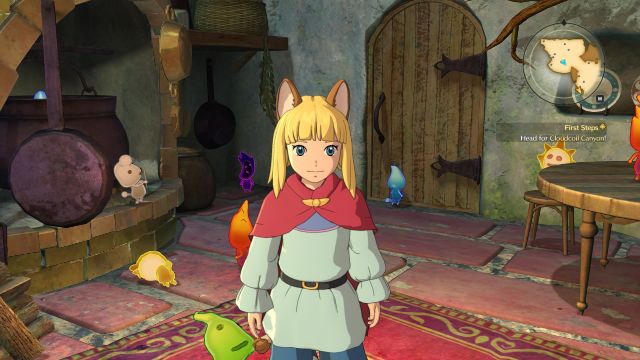 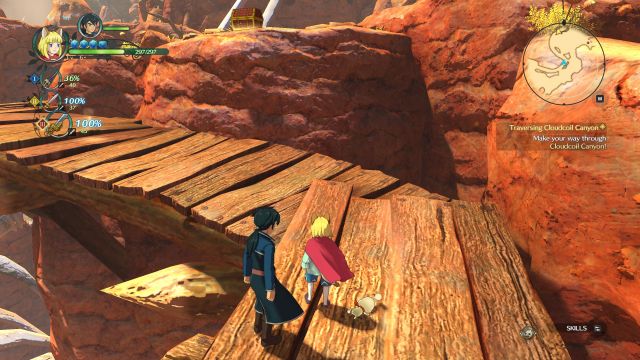 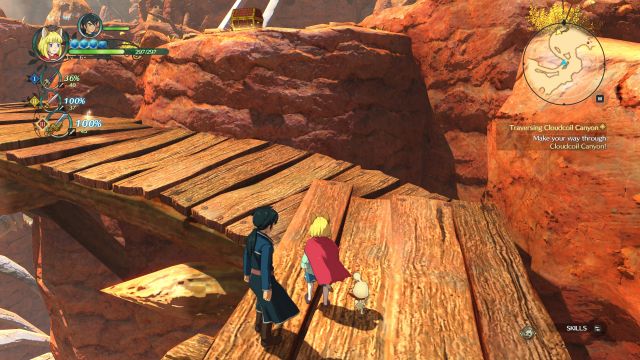 Probably low. And I should really label these as soon as I take them so I can be sure of that. 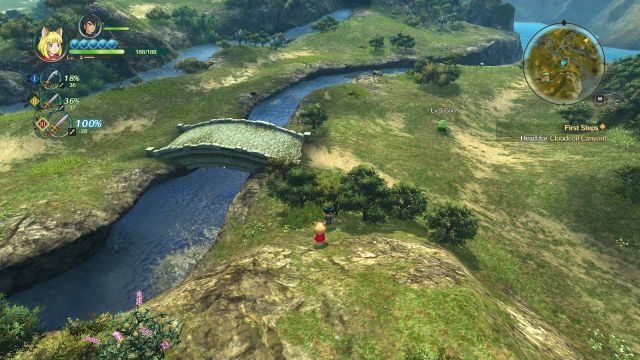 I… think this is high? 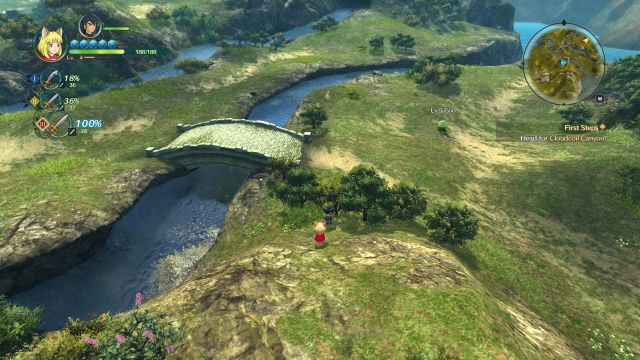 These comparison shots also show something else: because of the stylised nature of the graphics, there really isn’t much of a drop in graphical quality at all across the settings. The most immediately obvious changes are with things like bloom and motion blur, with shadows being a little way behind, but it’s pretty telling that I have a hard time determining whether some of the screenshots are on high or low settings.

Initially, I did wonder if Ni No Kuni 2 was doing that thing where it only really changes settings when you restart, I don’t think this is the case. A bunch of the screenshots peppered throughout this article are actually on low settings after a restart, and I’m damned if I can tell much of a difference. 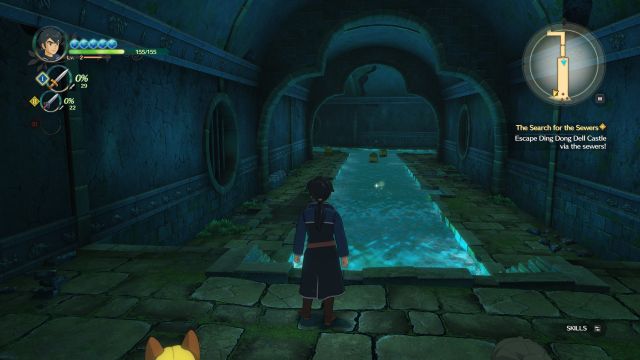 I mean, it even manages to make sewer levels look pretty good.

The flipside of this is that it changing the settings may not actually impact your framerate all that much. Considering my PC I can’t be sure, but I did experiment a bit with an uncapped framerate, and the results were pretty much the same across the board: an average of about 120 FPS on both High and Low presets, with occasional minor rises and dips (about 110 at the absolute lowest). The fact that it wasn’t really higher on Low presets is something I find mildly concerning, as it does indicate that fiddling with the settings might not actually give you any real framerate gains, but – again – it’s really hard to be sure.

But okay, it looks gorgeous, and – for me at least – runs at a constant 60 FPS, if I cap the framerate. How does it control? 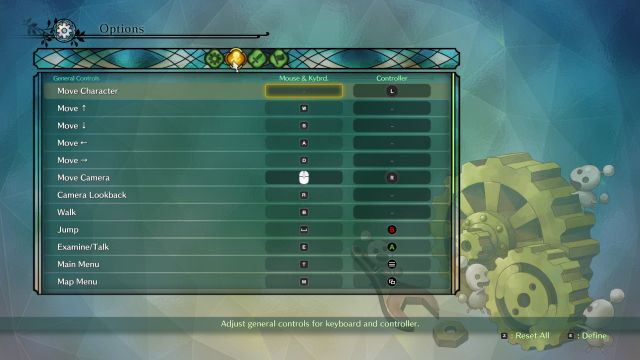 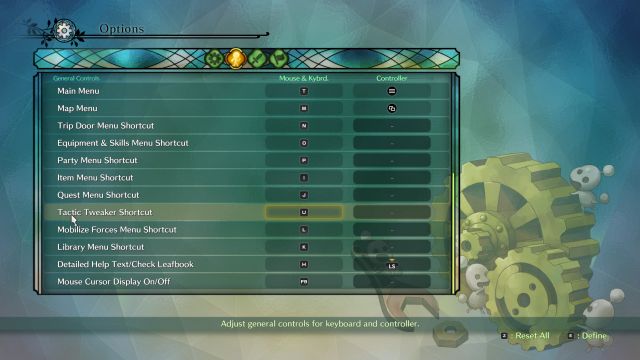 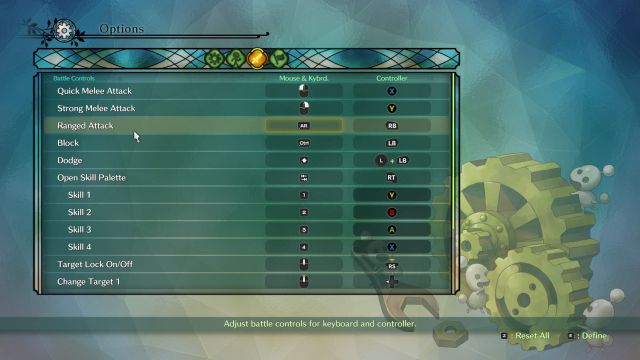 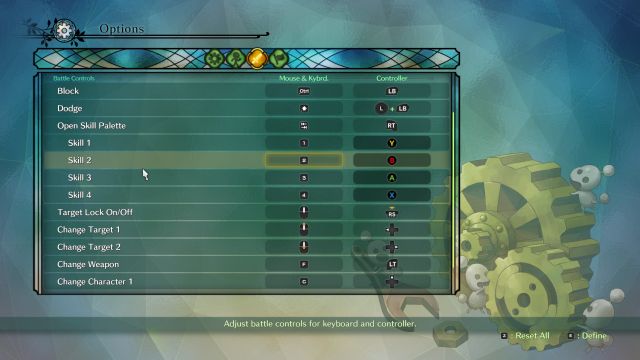 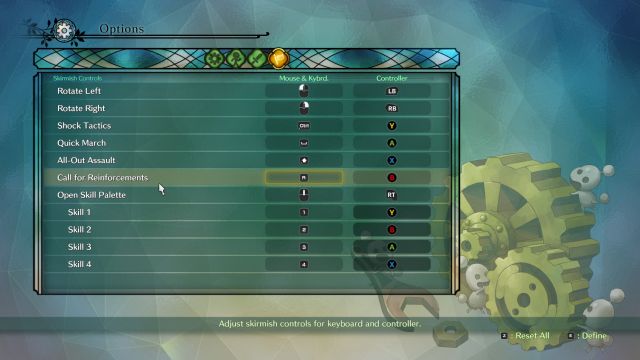 Er… really well, actually. This is one of the only PC JRPGs I’ve seen (Final Fantasy XV included) which actually uses the mouse cursor in menus, as you may have noticed in the options screenshots. This has actually led to some minor issues for me because I’m so used to FF15‘s method of menuing right now, so I try left-clicking to Accept when my cursor isn’t actually over anything, but I’m happy to see it.

The default mouse and keyboard controls are sane and make a good deal of sense, but there’s full rebinding available if you fancy it, extending as far as any additional mouse buttons you have. All tutorials and on-screen text reference the input device you’re using. It all feels very, very native to the PC.

About the only two (very) mild snags I can think of are that a couple of keys ideally need some sort of rebinding (party menu being T, for instance) and I had to max out the mouse sensitivity and turn off the automatically-adjust-camera-when-moving to make it “feel” right, but those are serious nitpicking. Admittedly the mouse sensitivity thing may require you to adjust things even higher via external means, if you like things to be even more sensitive than me. Oh, right: and I also wish it let me bind a control to more than one input. It’s a minor thing, but I do like being able to have a function set on both a keyboard key and an extra mouse button at the same time. 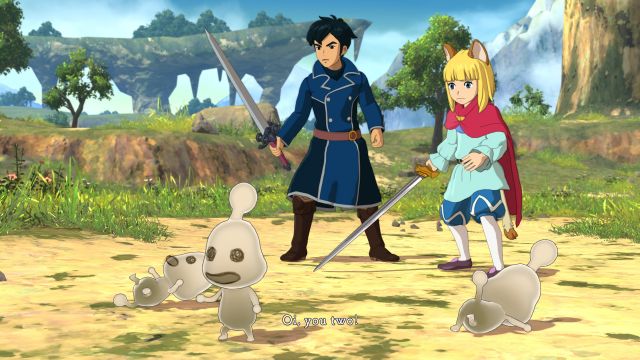 Like its predecessor, it’s basically an action-JRPG Ghibli movie.

There are three fundamental sections to Ni No Kuni 2, all of which work just fine on mouse/keyboard. World movement are basic keyboard movement controls (WASD, Space) with the mouse controlling the camera, and I can’t complain about either of these. Combat uses much the same, with left-mouse button and right-mouse buttons bound to weak and strong attacks, while 1-4 are your skills. There are more buttons at use here – switching weapons regularly is a big thing, and dodging and blocking are also required – but all of these are sensibly mapped. I can understand wanting to rebind ranged attack away from Alt to an extra mouse button, though, and maybe swapping the item use to something a little closer to your left hand.

Then there are the Army battles, which I was simultaneously the most worried about and the most excited for. On the one hand, RTS-ish stuff should be fine on PC. On the other hand, it’s RTS-ish stuff that’s designed for console, so, um… 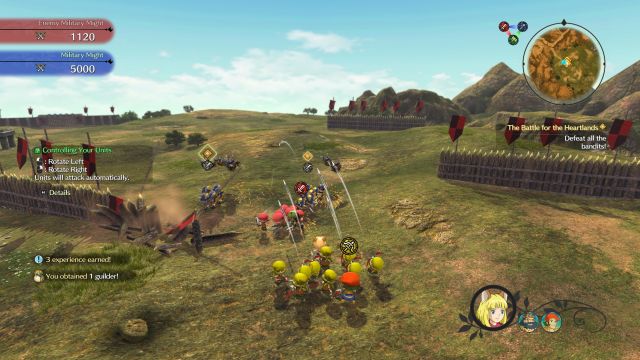 The initial battle, at least, isn’t exactly tactically intense, but I can see these getting a bit more interesting as the game goes on.

But this, too, is just fine. It’s very simplistic stuff: you have one main character, and all of your troops are aligned around him in a circle. You use the mouse buttons to rotate these troops left or right, ensuring that your melee soldiers are up close and personal and your ranged troops can deal damage, and also trying to make sure they have favourable match-ups. In addition to that, you’ve once again got skills that can be triggered with keypresses. Simple stuff, but fun, and – yet again – it works pretty much perfectly.

So, nitpicks. Um. Some of the incidental text (non-conversation/cutscene stuff) doesn’t scale particularly well at 1440p and looks a little small. I had one crash the first time I accessed the party menu, but I haven’t seen that in the four hours since. And… uh… at one point the mouse buttons stopped working in menus, but I think that was down to my macro settings rather than the game. 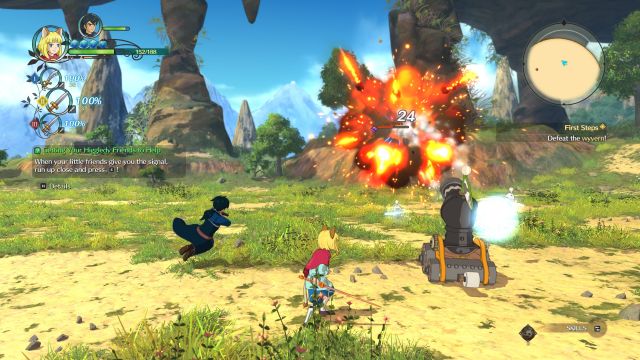 Battles, too, are a technicolour blur. Literally, if you haven’t turned off motion blur.

Yeah, that’s how far I’m having to stoop to find faults. Ni No Kuni 2 works just as beautifully as it looks on PC. For me, the only real cause for concern is optimisation: I simply don’t know how this’ll work on lower-end computers, and all indications I’ve seen on this computer are that you can’t really scale it down too well to improve the framerate. Considering how well it runs, though, I suspect mid-range computers should be absolutely fine with it. If it is more scalable than it seems on my rig, then I’d strongly suggest lowering the graphics in order to get it running at 60FPS: that makes a much bigger difference to the feel of the game and its flow than the few extra graphical bells and whistles.