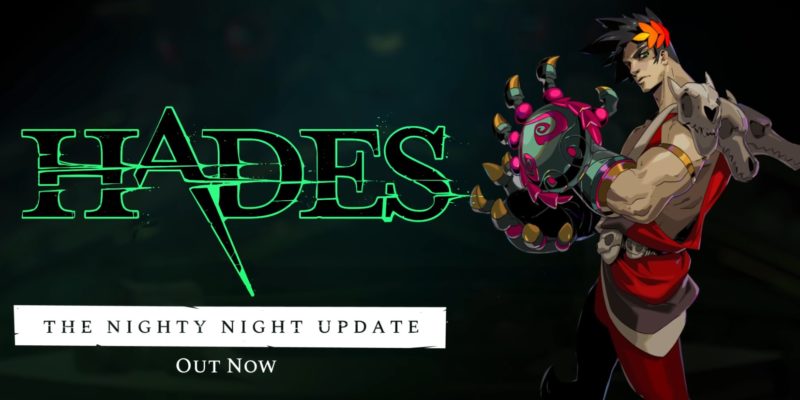 Hades‘ tenth major feature patch, The Nighty Night Update, is now live, and it introduces a bunch of new content to Supergiant Games’ early access rogue-like. The biggest feature coming with this update is the Twin Fists of Malphon, which kind of speaks for itself. It’s fists. With which you punch things. But that’s not all, because the Nighty Night Update also improves existing gameplay elements and the expansion of the story.

Punch things with the Twin Fists of Malphon

As Supergiant Games themselves put it, introducing a new weapon is kind of like introducing a new character class in an RPG. It changes up so many different gameplay possibilities that your entire playstyle can and will change. And that’s exactly what the Twin Fists will do. Naturally fit for close-quarters combat, the fist weapons are the fastest and most aggressive weapons in the game. If the Stygian Blade got you close to your enemies, the Twin Fists will really get you in your opponents’ faces. If you’re a fan of fast, knuckle-based fights, you’ll want to give these a try for yourself. Of course, new Aspects will also accompany these bad boys.

Speaking of the aforementioned Stygian Blade, it received an update as well. With the Nighty Night Update comes the Aspect of Arthur for the weapon, which brings the holy might of Excalibur into the underworld. This creates Hallowed Ground with your Special attack, thus reducing aura damage.

Another major change is the update to the Mirror of Night, where you choose and unlock your talents. With twice the amount of talents, you can expand and enhance your playstyle exactly to your liking.

Several narrative paths were expanded and added in the Nighty Night Update, so make sure to speak to all your friends and sort-of-foes down in the House of Hades or out on your adventures.

Honestly, there’s a whole host of smaller additions, ranging from new voice lines to existing weapon adjustments, from menus and art to entire boss encounters. For the full list of all changes, check out the official patch notes.

Supergiant Games is doing an excellent job of keeping Hades updated and fresh with new features. Also, more cool stuff will arrive in June, including new boons, foes, aspects, and items. But until then, try out the Twin Fists of Malphon.