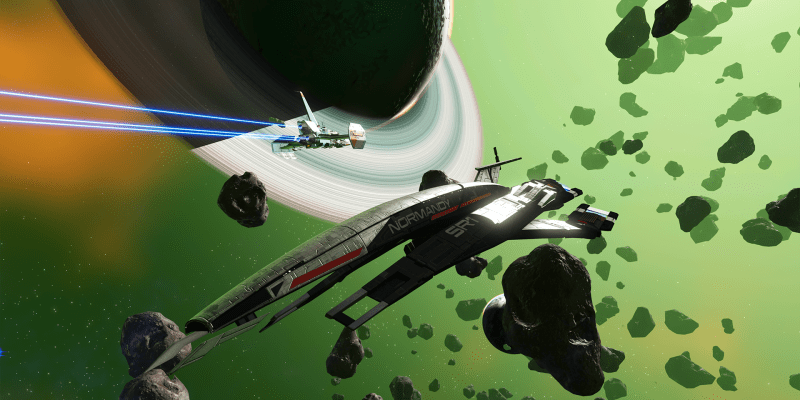 The end of No Man’s Sky‘s latest expedition, Beachhead, holds a special secret for Mass Effect fans. Developer Hello Games revealed today that anyone who completes the puzzle-filled expedition will find the SSV Normandy SR1, a Mass Effect spacecraft. Now that the cat’s out of the bag, there’s only 10 days left to grab the Easter egg, so finish Beachhead while you can.

Hello Games launched the second No Man’s Sky expedition last week, teasing that it would be “very different” than the previous Pioneers expedition. Beachhead involves a series of puzzles leading to the Normandy SR1, including a secret alphabet and a mysterious tool. Those who manage to crack the case can summon the spacecraft to the sky. “We are thrilled and flattered that BioWare and EA let us pay tribute in this way,” the developer’s update read. “As huge fans of the series, it’s a lovely moment for sci-fi fans.”

Hello Games offered a glimpse at the Mass Effect x No Man’s Sky collaboration in a new trailer. The completed Beachhead expedition will show the Normandy SR1 soaring through the sky. Then, players can permanently add the craft to their frigate fleet. The Beachhead expedition will come to a close on May 31, marking the end of the Mass Effect crossover.

A new way to explore

Hello Games added the new expeditions mode to No Man’s Sky back in March. Each community-driven adventure puts a group of players on the same starting planet with a list of tasks and milestones. Players explore the galaxy by completing different phases of the journey. When they completed the expedition, they receive special rewards to keep forever.

The Beachhead expedition may be coming to an end, but No Man’s Sky still has surprises in store. The sandbox game turns five years old in August, and Hello Games teased that a celebration will begin very soon. A new expedition will also no doubt follow closely behind Beachhead, so stay tuned.

Rise of the Betrayer preview — Dying to live, living to die

A cross-play beta for Destiny 2 is coming next week