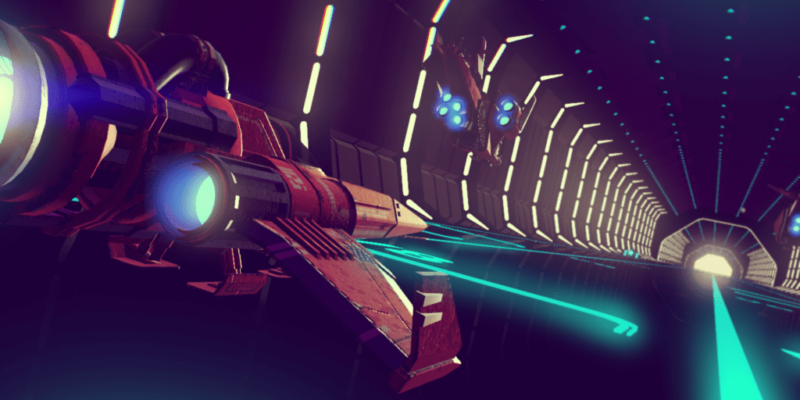 What do you do in No Man’s Sky?

That’s been the popular refrain on forum threads, twitter posts, podcasts, and the rest of the social media merry-go-round whenever Hello Games’ colourful space exploration title has been brought up.

It was never actually the total mystery the ubiquity of that question made it appear. The game was first shown during the 2013 VGX event, remembered forever by history as “that awards show Joel McHale ruined and/or made worth watching for once.” By June 2014 (after an impressive showing at Sony’s E3 event), No Man’s Sky’s website had a fairly extensive ‘About’ section including details of exploration, survival, space combat, and trading. You can still read the page, preserved as it was at that time, thanks to the WayBackMachine. 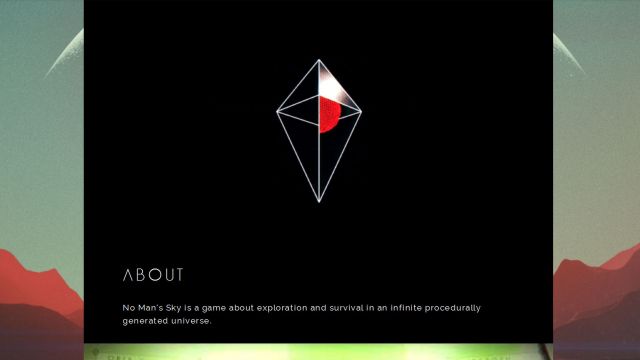 Anybody professing total confusion over what No Man’s Sky was about after mid-2014 hadn’t really bothered to look into it.

Granted, the available details weren’t exactly what you could call extensive. There were no lengthy blog posts offering in-depth explanations of systems and mechanics, and most of the promotional videos seemed to show roughly the same things; wandering around on planetary surfaces, and a bit of flying into space. That was vague, but intentionally so.

Because here’s another, equally important, question to ask yourselves: Do you really want to know about No Man’s Sky in detail before it even comes out?

Last week saw a glut of previews and coverage of the game, following an event at which press were able to play the game for a limited amount of time. In one of those magical moments of marketing synergy this coincided with the announcement of an expensive Collector’s Edition (complete with an amusingly named “Toy-Style Replica” space vessel), and pre-orders being taken for the title. Across a period of 48 hours or so there were suddenly published specifics about the game’s resource collection, crafting systems, NPCs and more. Plus a way for people to splurge on the game itself.

Wait, don’t I know you from Battlestar Galactica?

With that, No Man’s Sky slipped effortlessly into a more traditional pre-release hype cycle. While this was an inevitability (Sony were never exactly going to allow this one to remain quite so enigmatic), it also feels like a bit of a shame.

Fellow PC Invasion writer-bot Tim McDonald has previously mused about publishers over-sharing information through marketing, and it’s something which troubles and irritates me too. One of the recent interviews given by Sean Murray from Hello Games makes me suspect it’s a subject he struggles with too.

The desire to share exciting features from upcoming games must sometimes be overwhelming. But it must also be tempting to hold things back. Things you want players to learn, and witness, and discover for themselves; particularly in a game based around exploration, and open, self-penned narratives. Have a listen to this first question and answer from Murray’s chat with Giant Bomb. You can hear him agonising over how to strike the right promotional balance.

“I think in terms of what we could show there’s this really difficult thing, which, I don’t know if we’ve ever struck the right balance on,” he says. “We’re showing the game, but loads of times we’re holding stuff back … you’re sitting journalists down to play it, or talking to them about it, and you’re biting your lip because you want to say ‘we’ve got NPCs, we’ve got trading!’ but you don’t want to because you don’t have it there to show, and you’re not sure exactly how it’s going to work out.”

Of course Murray isn’t the only person in control of when this information is released. As a figure in part of a wider marketing strategy, he’ll be under some pressure to talk about specific things, hit (and avoid) specific phrases, and perhaps even go against his own instincts about what should be revealed, how it should be revealed, and when.

I’m glad they revealed this marvellous shade of space-pink.

No Man’s Sky has been buffeted between the competing pressures of marketing (who just want to sell, sell, sell) and reticence (on the part of Hello Games) to spoil too much in advance, or over-promise something they can’t deliver. Swirling somewhere in the middle of this dichotomy are various player expectations; from those who want to consume everything there is to know about a given title, to those who’d much prefer discover things for themselves.

Generally, you can count me in the latter camp. The nature of my work means I’ve usually seen far more of a game than is welcome before its release. Ubisoft’s The Division isn’t even out at the time of writing, but the deluge of videos and promotional hype surrounding it mean I’m already in danger of being a bit tired of that game. I’m avoiding Dark Souls 3 information as best I can, because that’s a series which benefits hugely from delighting the curious player with horrific and wonderful surprises. My strong suspicion is that No Man’s Sky is a title along similar lines; one where talking about too many aspects ahead of time diminishes the feeling of finding and learning about them on your own.

That doesn’t mean people who want more pre-release specifics are completely wrongheaded. Too many instances of flashy E3 demos and misleading statements (let’s just call this Molyneuxing) has bred a lot of skepticism, and if you’re going to drop $60 or more on a game it makes sense to be fairly sure about it in advance. Players can also be just as eager to grasp early details about story or mechanics as developers are to talk about their creations.

There’s no real resolution to this, because the various forces involved are pulling in dramatically different directions. Marketing want you to buy the game, and generally adopts a strategy of “tell people about as many cool things as possible” to do so. Any titles which benefit from as many players as possible coming to them ‘blind’ will struggle to keep details mysterious, because there’ll be constant pressure from publisher (or distributor) and players to divulge information. It can be difficult to take “no, look, our trading and exploring will be really amazing we swear” on faith, even if it is absolutely true.

But it’s also important to keep in mind that any additional details released during a marketing cycle of a game’s release will have been carefully selected to make the title look as attractive as possible. You may be learning more, but you won’t learn that a game is all set to launch with a host of technical problems, boring systems and a terrible story. That kind of thing will only ever emerge on release day or around a review embargo (and all too often those dates are exactly the same). Marketing can’t tell you, truly, whether you’ll enjoy playing something. Nor will it ever tell you if a game will function properly.

So, what do you do in No Man’s Sky? Honestly, I’m content to think it’ll be kinda like a modern Captain Blood but with some colourful procedural planets. Deeper critiques can wait until June.

Overwatch release and open beta date might have leaked

House Flipper: HGTV DLC — Is it worth it?