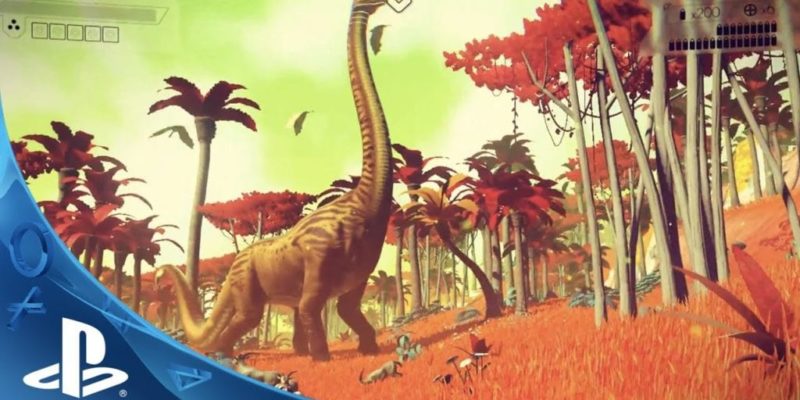 You took a bit of a risk parking in the middle of a field of dinosaurs.

Hello Games showed off a little more No Man’s Sky at the Sony E3 press event tonight, and it continued to look just as ambitious as before. The video sequence reiterated the intent to allow players to explore unique, procedurally generated planets and engage in space combat between discoveries.

Starting on foot, the footage began on a planet full of pseudo-dinosaur life. The player then enters a nearby ship and blasts smoothly into space, encountering enemy vessels along the way. After a spot of intergalactic sparring, the action switches to a dogfight closer to a planetary surface. Finally, the player launches back into deep space once again.

Frankly I have no idea whether No Man’s Sky can live up to its hugely ambitious premise, but I’m eager to see it try to do so. The footage shown so far has looked pretty strong, with a rich colour palette for the grounded planetary stuff and enough interesting space-bits to enjoy too.

The video below is the PlayStation branded version, but it’s coming to PC as well.

And here’s a trailer about the “Infinite Worlds,” plus some E3 screenshots too.

By Mike Straw7 mins ago
Hardware

By Ben Kerry37 mins ago
Industry