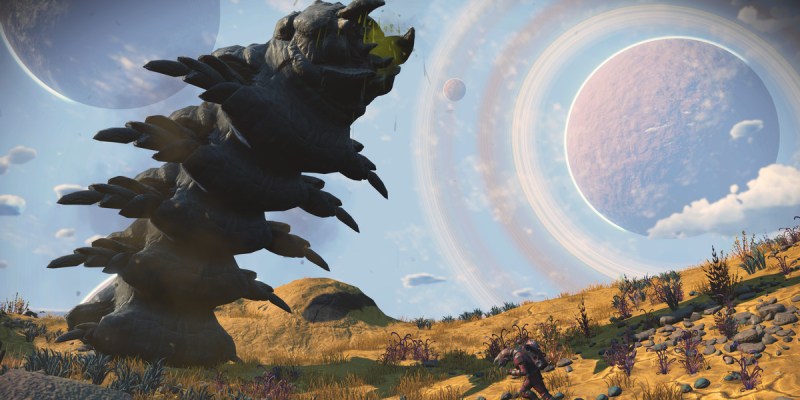 Earlier this year, the interplanetary survival game No Man’s Sky received a brand new game mode for players to enjoy, entitled Expeditions. In this mode, players start from a fixed point in the game’s procedurally generated universe so that they can tackle specific exploration goals and even meet other players on their journey. Before today, No Man’s Sky featured three separate expeditions, each with different objectives, rewards, and themes. Now, No Man’s Sky has a fourth expedition for players to try, which goes by the name of Emergence.

This new expedition specifically focuses on gigantic sandworms, and a recently released trailer shows these creatures off in all their glory. Most of the trailer consists of the player character exploring a harsh desert planet while these titanic worms rise from the ground and fly through the air. A few short clips even depict the player character riding on the worms as they soar, an activity that seems to represent the highlight of this latest update.

A step up from past expeditions

According to the No Man’s Sky website, Emergence “will run over the course of Halloween.” Players will explore Wasan, a desolate desert planet “ravaged by dust storms and infested with Titan Worms.” Players have “to locate the Titan Worm impact sites, destroy the wretched Hungering Tendrils, and collect the Vile Spawn that lingers behind.” As players accomplish these goals, they will unveil “the history of a dark cult, and ultimately confront the Atlas with evidence of this indelible stain upon the universe.”

Interestingly, Emergence is the very first expedition in No Man’s Sky to boast a narrative throughout its duration. This alone should make the expedition a decidedly distinct experience that fans will no doubt appreciate. Players can immediately start Emergence today, so it won’t take long to experience the joys of riding on sandworms for the first time.