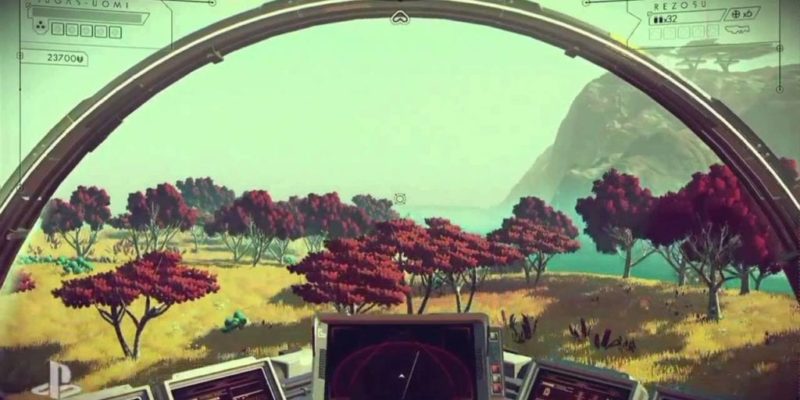 Hello Games’ Sean Murray was back at E3 this evening, showing off a bit more gameplay from No Man’s Sky. He didn’t have long (“three minutes,” he said, though it was closer to five,) but managed to demonstrate a little space combat, exploration, and the alarming size of the in-game universe.

Murray described No Man’s Sky as a “universe sized sandbox” and said the game was “all about choices.” By way of demonstration, he started out at the boundary between two warring factions. Capital ships and fighters were engaged in combat and, as Murray said, he could join in and take a side at this point (indeed, he did fire off a few shots.)

After that, there was a look at the game’s star map. This section started up close, at the current position of Murray’s ship. However, he wanted to show the scope of the No Man’s Sky universe. So he pulled back and revealed more stars (all of which are suns, supporting planets, which can be explored and may contain life.) Then he pulled back more. And … more. Then he did it with a fast-forward function and kept going for quite a while. No Man’s Sky has a lot of suns.

The game’s main ‘goal’ is for players to travel to the center of the universe. Which seems a little daunting, now that I’ve seen the size of the place.

Murray then warped to a random planet (Keyti) to see what would happen. Nothing terrible, fortunately. He landed on the world, wandered around for a bit, found a beacon (a point where you upload discoveries,) scanned for some alien life, met some fish, angered some automated Sentinels by demonstrating the destructible scenery.

He concluded by saying the game will have “trading, fighting, exploring, survival” and is “huge.” Murray also promised that a release date would be announced “soon.”

No Man’s Sky was using the semantic phrase “console debut” around the PS4, so it’s pretty nailed on for a PC release too (as has always been suggested.) Here’s the stage demo.