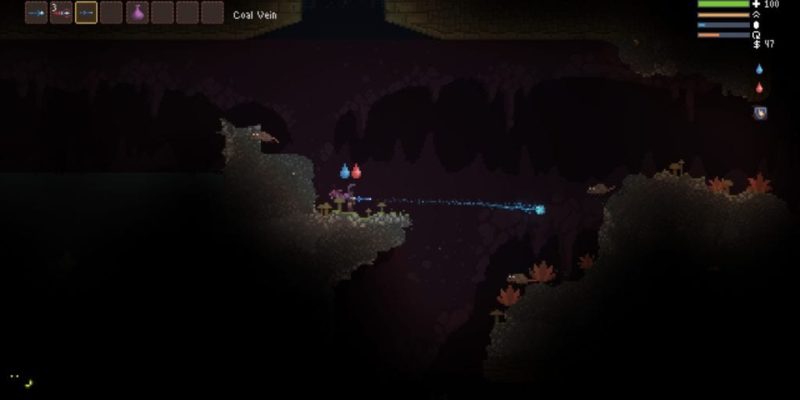 Noita is a 2D rogue-lite that releases into early access today. I was instantly intrigued upon first hearing about the game, as, much like Terraria, every piece of the environment can be destroyed in visually satisfying ways. The videos I saw focused on earth, dirt, and water falling in really cool ways. It’s safe to say that these features aren’t the crux of the game, but on its own merits, the game is shaping up to be a perfectly fine rogue-lite.

Every time you start a new game in Noita, you’re dropped to the entrance of a mine. Here, the game teaches you how everything works via button symbols engraved on stones near you. You can walk, hover, and use wands to attack. The default wand fires fairly quickly but is quite weak. You also start the game with three charges on your bomb wand. This creates a bomb that you can use to damage enemies and destroy the environment.

You can play Noita with either a mouse and keyboard or gamepad. However, due to the very aim-intensive nature of the game, I’d recommend the former. As you move lower into the mine, you’re beset by various types of enemies. I saw leaping foes, flying ones, ones with guns, ones who throw dynamite at you, ones that poison you. It’s pretty neat how the game just throws you into all of this with hardly an explanation. 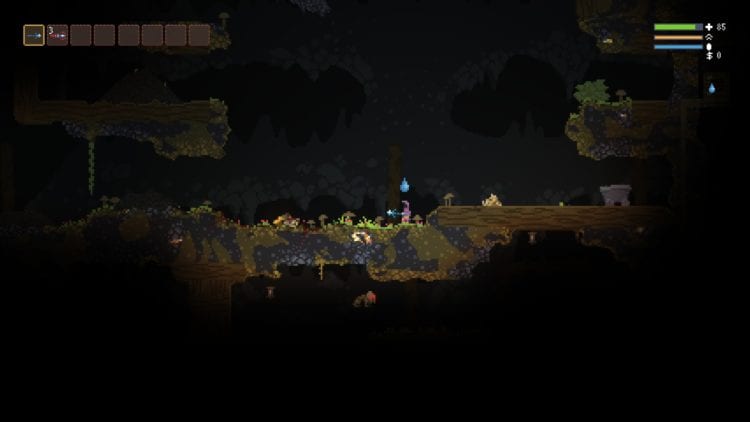 A dark mine. Very few weapons. What could go wrong?

Your goal is to go as deep as you can. Along the way, you naturally pick up new things. You’ll find pedestals with new wands and flasks. Some of the wands have a set number of charges, while others can be used indefinitely. Flasks, on the other hand, can either have their liquid sprayed however you see fit or the entire thing can be thrown and broken, which will fill the area it lands in with the liquid it contains. The game doesn’t tell you what these do, so you’ll have to figure them out by giving them a try. You’ll also sometimes get turned into a weird creature due to coming into contact with a specific substance. The transformations even have their own attacks.

You can’t take a ton of damage, but surviving until the next chance to heal isn’t an insurmountable obstacle. You’ll periodically come across purple portals that lead you to the Holy Mountain as you get deeper in. These portals always contain a health refill and a spell replenish, so you’ll be good to go as soon as you find one. But sometimes you’ll want to make a rush for these, as enemies can do a lot of damage.

Defeated enemies drop gold that can be used to purchase new skills at the Holy Mountain as well. You can also pick up one of three perks that can greatly help you. My favorite so far is the perk of immunity from fire damage. There’s a lot of fire in Noita and enemies love to throw it at you. If you get caught on fire, you take one damage a second until the fire burns out or you find water. But sometimes you won’t be able to find water nearby. The bigger issue is that there are pools of poison and poison enemies. Getting poisoned sees you take two damage a second. You can also clear this by going into the water. 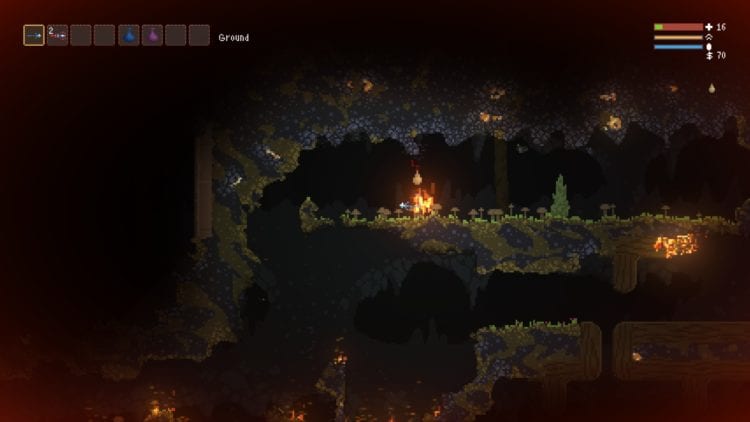 Welp, I’m on fire and low on health. Guess I’ll just spend the rest of my existence burning to death.

My biggest issue with Noita is that it’s just really easy to get poisoned or caught on fire, which can immediately sink a run if you aren’t able to find any water to jump into. But even then, it’s still manageable, especially if you have a helpful support perk.

Noita‘s combat and movement feel fine. You move at a fairly quick pace and pressing up to fly works well too. You do have a limit to how long you can fly before falling though. Wand attacks work well too, with aiming being exactly what you’d expect. It’s fun to get new wands and try their effects out too. My favorite wand I’ve found is one that shoots shurikens that do a high amount of damage. But they bounce off walls, so if one bounces back at you it can hurt you a fair deal. The game has spells that you can find and purchase as well, such as one that lets you shoot fire.

Since Noita is a rogue-lite, if you die, that’s it. Upon entering the game over screen, you’re given the choice to either start a new game or quit. Starting a new game curiously kicks you back to the desktop for a few seconds before the game starts again. From what I can gather, there is nothing in the way of permanent progression bonuses, which is fine. 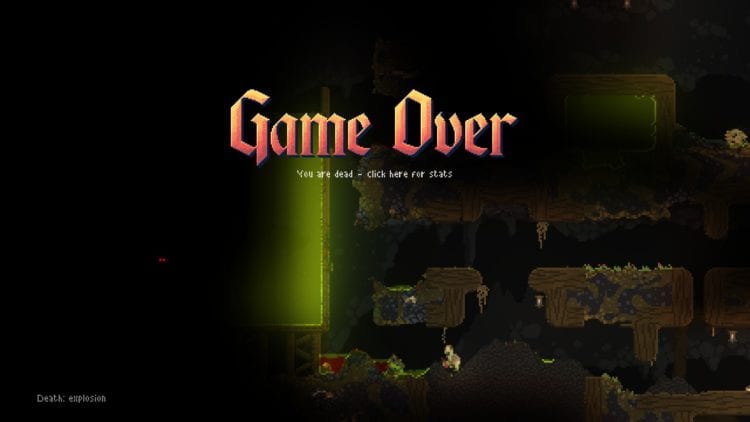 As you can see here, I’m insanely dead and the game is over.

Visually, Noita is very similar to Terraria. Everything is pixel-based and looks nice, with good use of color and solid sprite work. The way fire looks and spreads is especially well done, as is seeing it erupt in a ring surrounding where an explosion occurs. The way things light up the dark mine makes it feel like you’re wandering in the dark too, which I like.

The only complaint I have about Noita so far is that I wish you started the game with more environmental destruction options, since blowing up and altering the terrain is one of the game’s most amusing features. Still, this is already a solid rogue-lite that appears to have a fair amount of content, even on day one. If you’re looking for something similar to a rogue-lite Terraria that’s focused on combat, you’ll almost certainly enjoy this one. Just watch out for fire and poison and there’ll be a good time to be had.