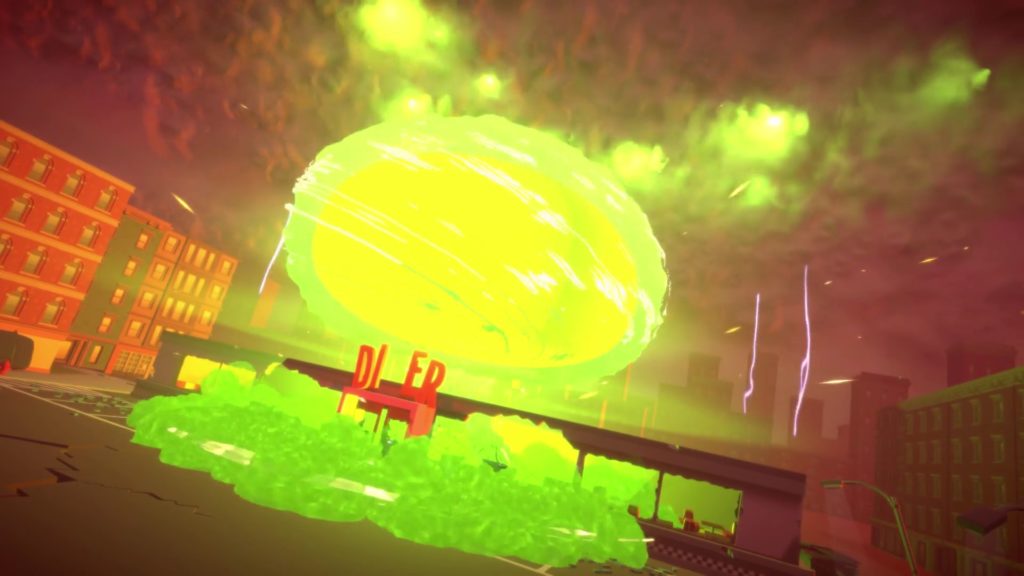 Top-down, two-player food fights sure sound like a recipe for success, but Nom Nom Apocalypse lacks the mechanical garnish to distinguish itself in the competitive rogue-lite/rogue-like space. PC Invasion’s Greg Bargas compares it to Enter the Gungeon. There’s challenging battles, there’s tactics, but nary enough depth to sustain long-term play. And while participating in a few food-flavored firefights certainly stimulate the senses, the tedious and buggy nature of the game also curb enthusiasm at every possible turn. It’s difficult to imagine many players coming back for a second bite.

The premise seems simple: mass hysteria has ensued following an invasion of evil creatures that have possessed all our favorite foods — an incredibly potent commentary on how the unhealthy lifestyles we lead will ultimately come back to bite us in the butt. Except, Nom Nom Apocalypse isn’t really about anything at all. Things need killing, and you and your plus one are the killers. The top-down shooting action is all too familiar, with nothing but a somewhat stale, food-focused aesthetic to sustain it. 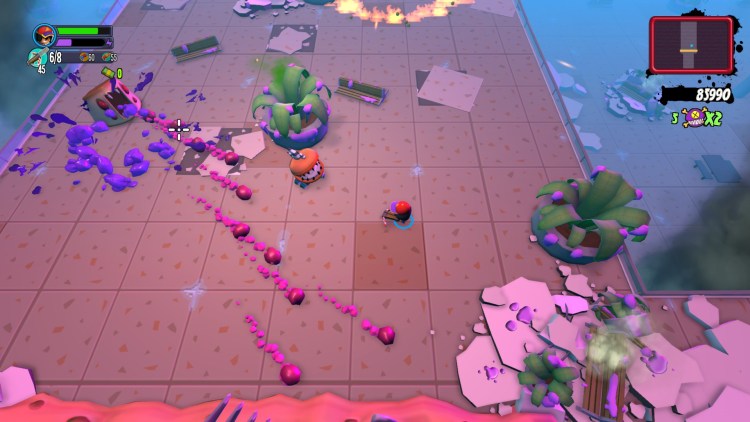 Nom Nom Apocalypse earns its rogue-lite label for its five procedurally generated stages — each one themed after a style of food. Every run consists of these five stages, presented in a randomized order; the challenge ramps up dramatically after every stage clear. Playing alone or locally with a friend, you fight through randomized rooms chock full of enemies. At the end of each stage: a unique boss whose health and attacks vary based on the stage count. The same boss, if encountered five stages into a run (rather than, say, the first), will have a vast array of new abilities on top of an enormous health pool to compensate.

Between each stage, you have the option to invest in-game currency in up to three perks for your character. Perks grant additional bonuses and modifiers that range from invaluable to mildly convenient. If you happen to taste death at any point in your run, you’ll be back at stage one with all your perks and funds intact. Nom Nom Apocalypse’s overarching progress does make runs a tad more forgiving, but it’s all too minor and lackluster to avoid the overwhelming feeling of stagnation. Runs are too generous with the in-game currency, and perks are too limited.

An appetite for murder

A plethora of playable characters, unlocked through challenges, are available for your choosing. Though each one has identical stats and starters weapons, they distinguish themselves through their traits and special abilities. Every character has a unique trait: a minor modifier that has very little bearing on playstyle. More significant is their special ability, which can be activated upon filling the “power grease” meter for a temporary edge in battle. One character might snag a speed boost, another might unleash a fire blast, but none make any character more worthwhile than the others. 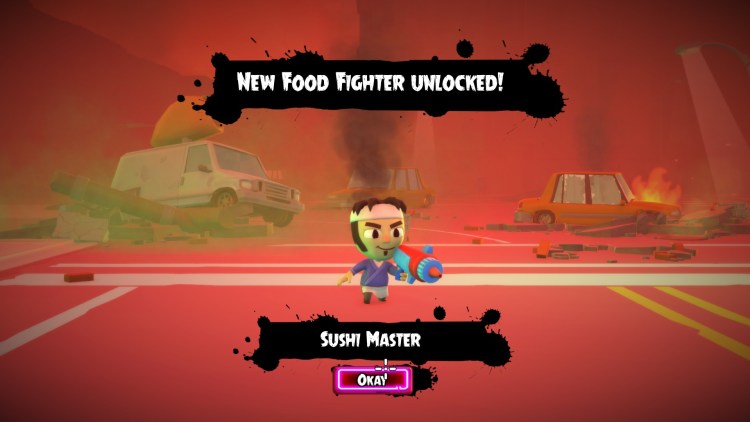 It’s the guns that really determine the outcome of a battle, and Nom Nom Apocalypse has a smorgasbord of them. You can only carry three guns at once, however, so choose carefully. Each stage rewards you with new guns at certain milestones within each stage, or offers up a variety of vending machines through which you can purchase new guns with currency. Health, ammunition, and power grease fill-ups can also be purchased at their corresponding machines.

I found many of the guns to be horribly ineffective, and clung onto the starting weapon, the Ketchup Squirter, until I could replace it with a few choice selections. It’s less a matter of playstyle and more an issue with weapon balance. Certain weapons proved to be ineffective against the majority of enemies, while others dominated across all scenarios. You’ll quickly be sold on the power of fully-automatic weapons, if guns like the Hummus Hammer and Ketchup Squirter are any indication. The lack of substantial feedback and weight behind the majority of guns didn’t help the odds either.

Five stages in succession is all Nom Nom Apocalypse has to offer. There’s nothing to do after a successful run other than to start up another one — all in the name of high scores. But, that first clear is hard to come by. As I unlocked more perks and earned more currency, stages rapidly increased in difficulty. Though I was building an encyclopedic mental database of all things food-pocalypse, enemy quantity, damage taken, and boss health skyrocketed dramatically. Eventually, boss health is so ungodly high that players could easily expend all their ammunition to merely scratch a boss’ armor. Had it not been for the crushing difficulty, Nom Nom Apocalypse would have trouble keeping a player hooked beyond the opening hour. 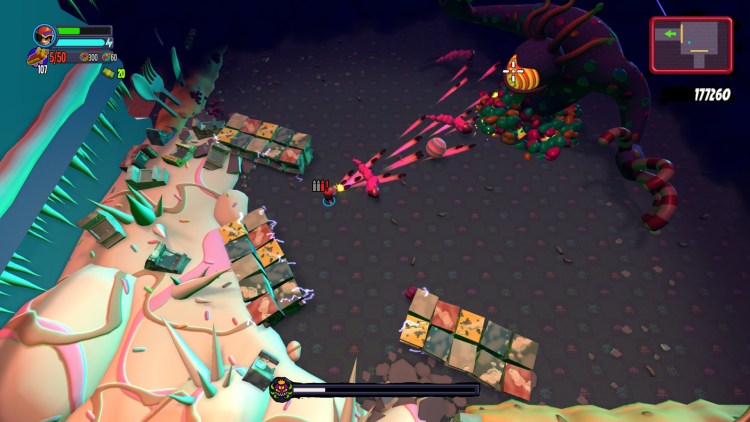 That ongoing war between monotonous stages and challenging difficulty keeps you engaged for at least a few extra hours — no longer. Each stage follows the exact same format: reach a locked gate, find a key to open the gate, pass some vending machines, and then confront the boss. No amount of procedural generation can save these five stages from growing hopefully predictable. Every small addition meant to spice up the experience, such as the traps and explosives scattered around the screens, are nothing but a side note. Destroying explosives and destructibles have no noticeable effect on any enemy, either. Even combat — Nom Nom Apocalypse’s bread-and-butter feature — bores with no considerable audiovisual feedback on hits and distracting weapon glitches.

A bug in my food

To add insult to injury, my time with Nom Nom Apocalypse was punctuated by a slew of bugs that contributed to many a failed runs. On a handful of occasions, I fell straight through the map. On others, the camera failed to track my character, leaving me wandering aimlessly around as I searched for an exit. Other issues faced include: weapons firing absurdly faster than normal, becoming wedged in corners, and enemies phasing through projectiles. 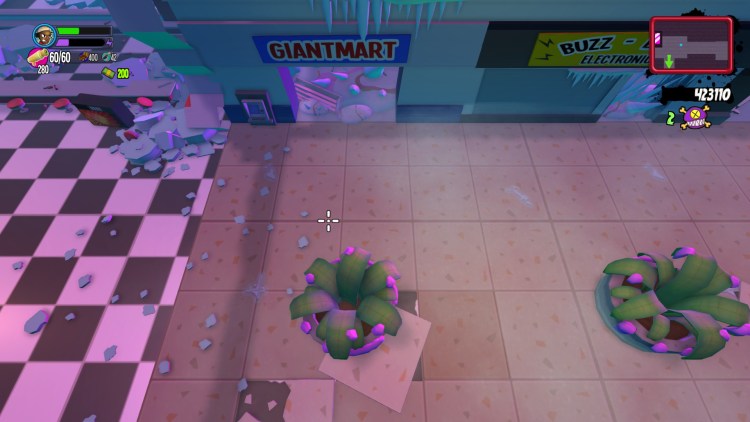 Guess where I am? I don’t know either.

Rarely did I restart a run without a certain degree of annoyance. A death is a death, but to be bested by a bug is not a particularly pleasant experience. If anything, the prospect of uncovering a new bug was the fuel I needed to hit the retry button.

Service without the smile

Nom Nom Apocalypse is the definition of a safe game. Everything we’ve come to expect from a barebones top-down shooter makes its way into the experience. Some of what we’ve come to expect from a rogue-lite finds its way into the experience. What players will not find are traces of novel gameplay concepts or refreshing ideas. It’s unquestionably competent, despite its unoriginality, but the myriad bugs that permeate every facet of the gameplay knock it down yet another peg.

Top-down, two-player food fights sure sound like a recipe for success, but Nom Nom Apocalypse lacks the mechanical garnish to distinguish itself in the competitive rogue-lite space. There's challenging battles, there's tactics, but nary enough depth to sustain long-term play.