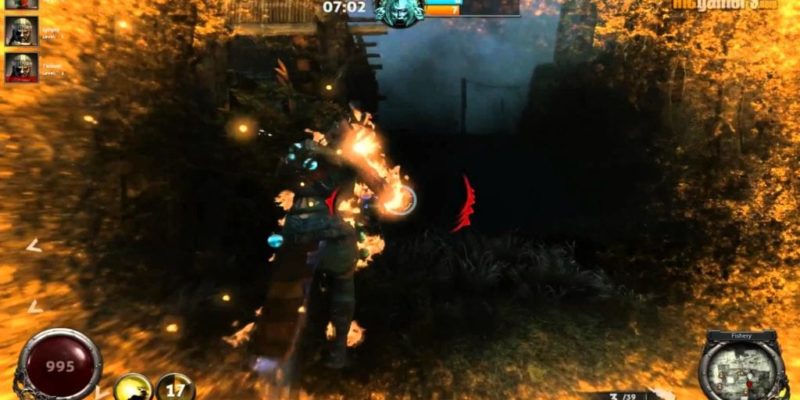 Not to be confused with some sort of Swedish death metal band, Nosgoth is the upcoming third-person online free to play vampire versus human game from Psyonix and Square. It’s also set in the Legacy of Kain universe, hence the name Nosgoth. So that’s at least something for fans of that series. The game is currently in closed beta testing so we took a peek at the game to find out more.

Just taking in the views

The current beta test includes a deathmatch 4 vs 4 mode where two teams duke it out in pretty large maps packed with buildings, streets and towers. Thinking it would be easiest to select the humans right from the start of my Nosgoth experience was a bad idea. Each match is split over two rounds and players have to partake as both the humans and vampires to complete a match, whether they like it or not. My plan for total human domination went straight out the window and I had to play as a disgusting looking vampire (I’m not prejudiced, I’m sure they have great personalities) in the first round after all.

Each side comes with three classes, in the vampire corner there’s the Sentinel which is the flying vampire, the Reavers with their deadly strikes, and the brutish Tyrant who loves to smash into humans. And in the human corner there’s the Hunter with a rapid fire crossbow, Alchemist with her magical grenade launcher, and Scout with the rapid firing fiery bow.

I can see you!

With the available weapons for each class you’d think the humans would have the edge, but in Nosgoth that’s not the case and both sides are pretty evenly matched. This is due to the fact the vampires have the ability to leap about the maps by scaling the buildings and pouncing on their enemies from great heights. The vampire Sentinel is also an interesting class because this guy can swoop down and pick up the enemies, or smash into a target, with the click of a button.

Besides the standard weapons, each class has special abilities which are on a cooldown timer. The abilities really come into their own when the action gets frantic. There were quite a few moments where I found myself bashing away at the keyboard in the hope I had just let off the firewall skill as an Alchemist to avoid having my throat ripped out. Meanwhile, vampires were slaughtering the rest of my team around me and getting stuck into some blood sucking action to revive their health.

These special abilities really help differentiate the classes and have to be used tactically. For example the Alchemist can let off a light blinding bomb or release a healing mist which are thrown on the ground, while the Reaver can fire off a really annoying Shadow bomb that makes the screen go all weird, making it hard to see. These are essential to master if you want to survive for more than 30 seconds, as they augment the primary and secondary attacks on the left and right mouse buttons. Fire off the wrong ability and it can go horribly pear-shaped for you and the rest of the team.

Playing as the humans is pretty tricky, you never know when (or where) a vampire is going to leap down or swoop out the sky. More often than not human players would stick in a tight group to watch each other’s back. Despite the fact I had no idea who I was playing with in the human teams we all instinctively stuck together. This is a really good indications that the multiplayer gameplay is working well as a player’s survival instinct kicks in.

While the vampires pick off their pray to revive their health and perform an execution, the humans have to use the special stations dotted around the map to rearm and restore health. That’s easier said than done when you’re being hunted down, but it’s an absolute necessity if you manage to survive long enough.

Nosgoth may not exactly be the Legacy of Cain game that fans of the originals want to see, but it’s so far proving to be a fun multiplayer experience, even in straightforward deathmatch, which can be quite dull in most multiplayer titles.

Nosgoth is free to play and so those ever-popular microtransactions do come into play, although it’s not entirely clear at this stage what impact they will have on the game. Reading through the tabs on the shopping list there’s everything from skin purchases to XP boosters.  Not everyone will be over the moon with anything that can give you the edge in a game like this, but it really is too hard to tell right now what impact the shop will have.

There’s obviously still work to be done with Nosgoth, and while a quick deathmatch romp around a few levels is always fun, it’s hard to gauge how compelling it will be without seeing other game modes such as Siege in action. Psyonix appear to have done good job so far but as with most free to play titles I still have reservations as to whether it will attract a large enough player base once launched.

I’ll be keeping an eye on Nosgoth as the testing continues and will revisit our blood sucking friends as the beta progresses.