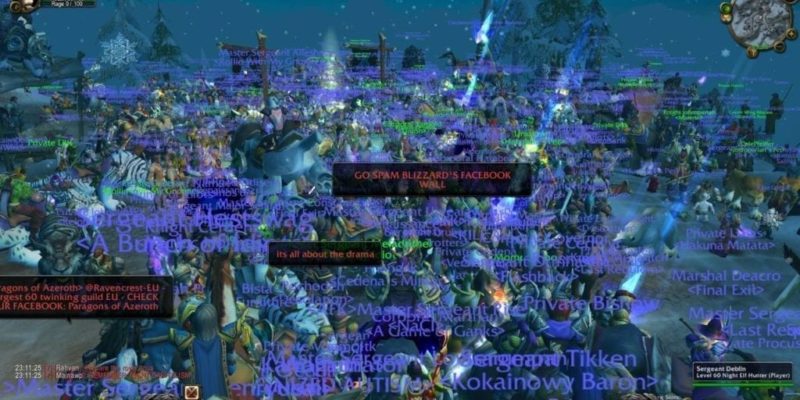 On April 10, 2016, an unsanctioned and fan-run vanilla World of Warcraft server called ‘Nostalrius’ was shut down under threat of litigation from Blizzard Entertainment.

From Blizzard’s perspective, the France-based server represented a case of copyright infringement, but for fans it was a chance to play a once-great game that simply wasn’t available anywhere else. And it was popular. Polygon reports that the server had over 150,000 active accounts at the time of the shutdown, many of whom went online in the final minutes of the game to give it one final farewell.

The many expansions to World of Warcraft have changed the game so fundamentally that those who only played the original version would barely recognize it today. Everything from the way dungeons and raids work to the many character attributes have been overhauled, and for many people, these changes have not been for the better. These people want the game as it was when it took the world by storm and rose to become the biggest MMO in video gaming history.

And it wasn’t a small number of people who wanted to enjoy World of Warcraft as it once was. Nostalrius hosted about 800,000 accounts over its lifetime. While World of Warcraft currently boasts around 5.5-million subscribers, and had over 10-million at its peak, 800,000 is nothing to sneeze at. It demonstrates quite a bit of interest in playing a game that exists for most only as a memory. But Blizzard has made the decision, as is their right, to prevent that memory from being made real again

Blizzard’s actions represent a real problem for those who want to preserve games as they were. Online gaming changes through patches and expansions, causing the game to evolve in ways that alter its fundamental identity, at least as far as many players are concerned. These games differ in an important way from other media, like books, movies, or record albums. Those can easily be archived, put in libraries, and made available for public consumption forever.

You can still read The Canterbury Tales just as it was when it was first published in the fifteenth century, or listen to Mozart’s music as it was written more than two centuries ago. Even most single-player games can often be thrown onto a disk and enjoyed as they were for years. But games that can exist only when hosted on servers are much harder to keep as they were. You have to play the version of the game the rights-holder wants you play now. It’s as if the author of a book kept revising the text after you purchased it, and will sue you if you try to read the book as it once was.

The legal mechanisms that give rise to this situation are simple. When you buy an online game like World of Warcraft, you buy only a license to access the game as it is presented, not the game itself, nor a right to play the game forever. When a private server runs a version of the game, it necessarily copies the copyright-protected code in order to run the game. This is copyright infringement unless it’s sanctioned, and the copyright holder is entitled to prevent the ongoing infringement from happening.

The law is what it is, but it should never be confused with what’s right. “Let’s Play” videos and streams could well be copyright infringement (at least in some cases), but that has never been litigated because they’re generally symbiotic with the developers. Indeed, many expressly give permission on their webpages for this use. But developers appear hostile to the idea of private hosts of their games, even where those hosted versions are significantly outdated and can’t be compared with the live version.

The loss of older versions of online games is a direct loss to the public and those that want to experience a game that simply isn’t available anymore. Blizzard possibly sees private servers as reducing their own revenue and player-base for their live game, although it seems highly unlikely that many of the 150,000 players of the shut-down server Nostalrius are suddenly going to hop into the current incarnation of World of Warcraft. It’s clear they don’t like that version of the game, and moreover, they’re unlikely to reward Blizzard with their money for putting an end to their favorite game.

With respect to my own biases, I was a hardcore vanilla World of Warcraft player that quit after The Burning Crusade. I certainly never joined Nostalrius or any other private server, but I can well understand the appeal of the game as it was. But it’s not just about World of Warcraft. It extends to every other online server-based game as well, and may well prevent even those games that are now totally defunct from being enjoyed.

Video game preservation is slowly growing, and even mainstream museums have begun adding video games to their exhibits, such as the Smithsonian’s The Art of Video Games. A permanent video game museum was also recently opened in Frisco, Texas. While the Library of Congress in the United States has loosened some restrictions on preserving abandoned games that require online authentication, the exception does not apply to games that use substantial server-side assets, such as most MMOs and many other online games.

Ragnaros was one of the major end-game raid bosses in Vanilla WoW, taking a group of 40 max-level players to kill.

And while the legal arena may someday allow for privately-hosted servers for completely abandoned games, it’s unlikely that it will ever happen for games that still have living versions. For those games, gamers need to make it clear to developers and publishers that they want to play and preserve what was. Like “Let’s Plays”, they need to be convinced that older versions of their games aren’t in competition with their games, but symbiotic with it, and they can capture revenue from both sets of players. They need to be convinced that keeping their old versions alive is worth the cost.

Perhaps Blizzard will launch a vanilla server themselves, or simply license the vanilla code for a nominal fee. Either way, it’s the players that win. The team behind Nostalrius has a petition for just this sort of thing here.

Ultimately, there’s no reason that we shouldn’t treat video games the same as any other cultural or artistic product, and endeavor to preserve them for the future as best as we can. And just because online games are continuously updated, it doesn’t mean we shouldn’t be able to hold on to their better incarnations that may long have been lost in the living incarnation. To lose those is to lose important cultural touchstones, just as important as many movies, albums and books. We can’t expect future generations to understand the impact of World of Warcraft without access to its vanilla version. And we can’t all enjoy the games we want to unless we can play the games as they were once were.