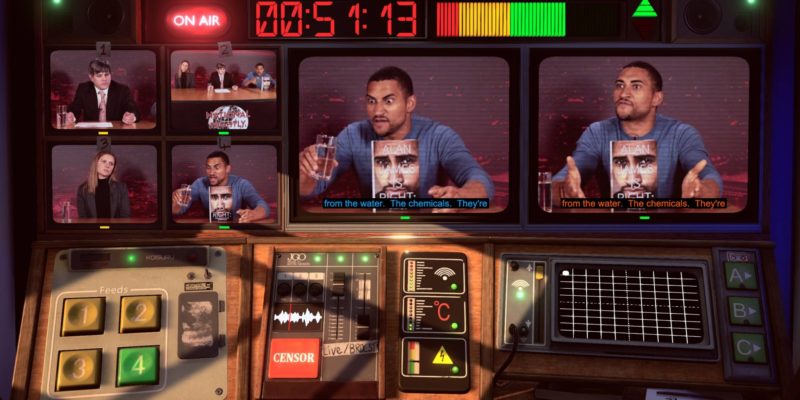 Of all the jobs in the world, it seems to me that producing live TV is probably one of the more stressful. Anything can happen and anything can go wrong, and there’s only so much you can plan for. What fun, then, that Not For Broadcast hurls you directly into this role and makes you responsible for… well, everything. In an alternate 1980s, no less.

Despite only wandering in to clean the studio, you’re unceremoniously plonked in charge of Nightly News. It’s up to you to switch camera angles, avoid interference, bleep out the naughty swearwords, and even make a few decisions about what to show. Considering your new job starts on the eve of a rather radical political party winning a victory and beginning to implement some dystopian measures, those decisions may have far-reaching effects. 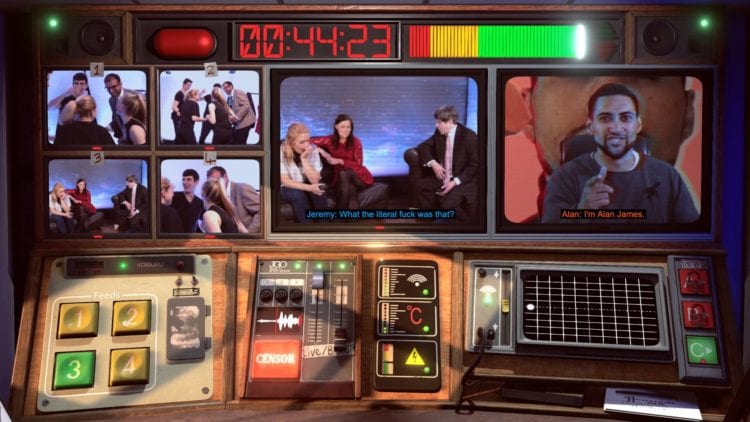 Right now, you mostly need to worry about cameras and censoring. But if those dials are any indication, temperature may be an issue in the future too.

The vast majority of Not for Broadcast‘s gameplay is divided up into individual nights, spread out across the months of the party’s reign, and you’ve got plenty to do. Initially, it’s simple enough: swap the camera angles to show the person who’s talking, and maybe cut over to a wide shot or a reaction shot to keep things from getting boring. This is actually pretty fun by itself, but this is far from your only responsibility.

Censoring any naughty words is a secondary responsibility. Your introduction to this pretty much comes through the victory broadcast of the aforementioned radical party, where one of the two leaders has had a little too much to drink and isn’t watching his language particularly carefully. You’ve effectively got two seconds between the recording and the actual broadcast, and while you have a visual indicator of when you need to hold down the big red BLEEP button, you usually want your eyes on something else. You can either count to two and then push it, or you can turn up the audio of the actual live feed and time it to that – although listening to two audio feeds at once is a challenge in itself.

Unacceptable in the ’80s 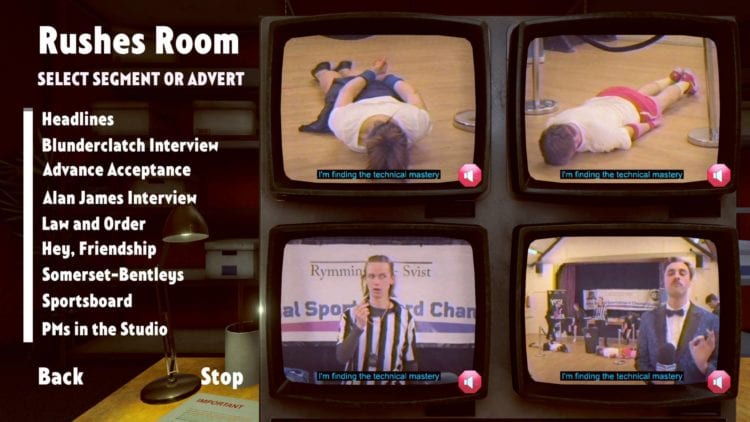 The Rushes room lets you watch any segment or advert you’ve played, letting you check out all the behind-the-scenes drama that you didn’t broadcast.

And then there are the times when things get really chaotic, like when streakers charge onto a sports broadcast and you need to rapidly change camera angles so as not to show any dangly bits on TV. Or censor some cluster-swearing. Or bits of both, combined with interference that requires some knob-twiddling (unrelated to the dangly bits).

Things get rougher still. Your equipment isn’t exactly the best, and a thunderstorm on the third broadcast electrocutes half of your panel. Touching a button that’s got electricity arcing through it is a dangerous idea, and hitting too many of them will result in a game over – but the show must go on. I could honestly do without this particular mechanic, as it messes with the rest of your responsibilities a bit too much, but it’s possible I just need more practice. 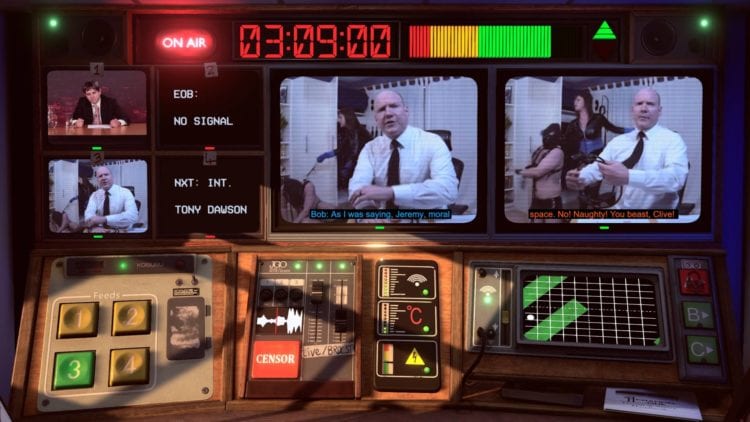 And obviously, he’s wearing suspenders and no pants.

Despite the overtones of political dystopia, Not For Broadcast is mostly a very, very tongue-in-cheek and over-the-top satire, with everything filmed in glorious (and slightly cheesy) FMV. Whether you find it funny or not is entirely subjective, but I laughed out loud more than once… which usually distracted me enough that I screwed up.

Excellently, though, you can watch the rushes from any completed broadcast. While you won’t be able to hear what’s going on in the studio while you’re broadcasting something else (despite being able to see people yelling at each other and flinging things), you can dive into those rushes to see what was happening in the background. I’ll say this, though: it’s almost certainly not for the easily offended.

The humor plays heavily on stereotypes, and is incredibly British. There’s an actor who’s all-knowing on set and a complete diva when the cameras are off; a pundit shamelessly plugging his book; a moral guardian police officer with a gimp in his closet; and a bunch of posh twits speaking with very affected speech and a lot of entirely fictional words. Some of which count as swearwords, so fingers on that censor button.

On the next episode 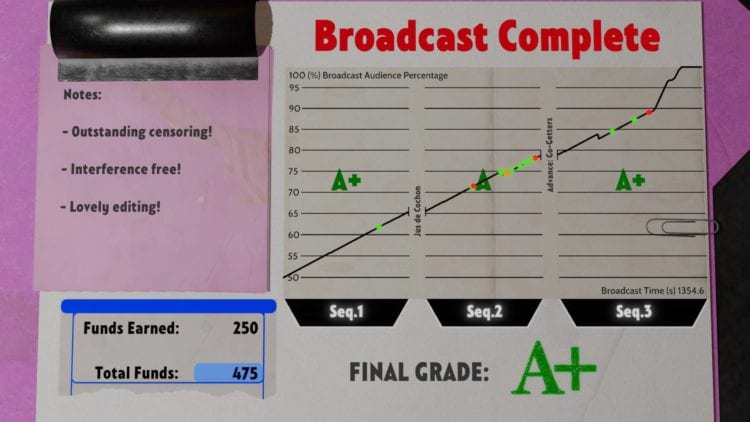 Not For Broadcast‘s Early Access launch comes with three chapters of a planned 10, and this unfortunately means there’s a bunch of stuff that’s teased at best. There’s a shop you can use to decorate your office or to purchase upgrades, but there’s no way you can earn enough for most of that stuff in this version. We’re promised that we may be asked to censor information that the government doesn’t like, but there’s none of that yet.

There are also promises of branching paths, but I’ve only seen some very minor changes in the current version. As an example: early on, you have a choice of playing an advert for a potentially dangerous toy. In a later broadcast, it turns out that toy had to be recalled because it was dangerous. If you advertised it, it was more popular than if you didn’t. Does that have an impact on the wider narrative, or is it a minor change to make you feel like you have some control? Not a clue.

Another of your responsibilities is choosing which image to use for each news headline. A popular sports player leaving a pub with a lady, or projectile vomiting? A young new CEO of a major corporation being shown holding a diploma, or rolling dice at a gambling table? Up to you, and you’ll be swaying public opinion and the focus of the news with each decision. But again, I simply don’t know if these will wind up having a major impact or if they’re just smaller storylines that you can change. 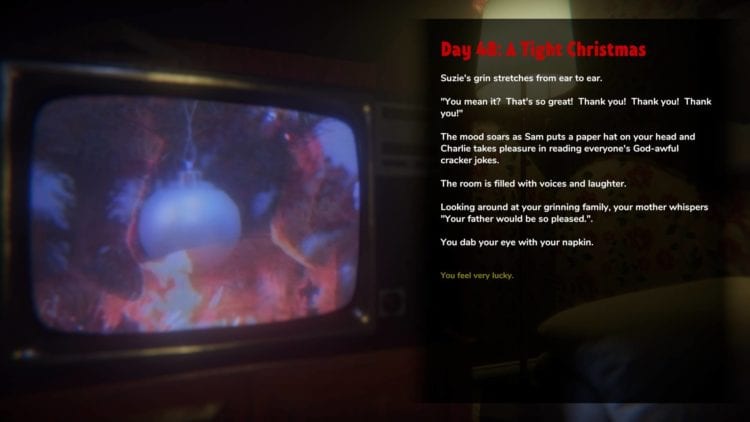 There’s one other aspect to the game which I haven’t touched on, and that’s the bit between broadcasts. Here, you play a purely text-based choose-your-own-adventure regarding your own home life and how you and your family are dealing with the rise of the new government and the sweeping law changes taking place.

These bits are pretty much without humor: they’re far more solemn and serious than the farcical studio segments. Again, these branch out pretty heavily depending on earlier choices, but the wider impact is still completely unknown to me. You might help your brother-in-law escape one of the new reforms at cost to your own family, or encourage your child to join the youth division of the new government. They’re thought-provoking, but again, there’s less than a third of the game here right now. This means that it’s impossible to judge whether they’re welcome moments that further explore this world, or just interruptions that pull you away from the fun of fiddling with FMV.

Do not attempt to adjust the picture 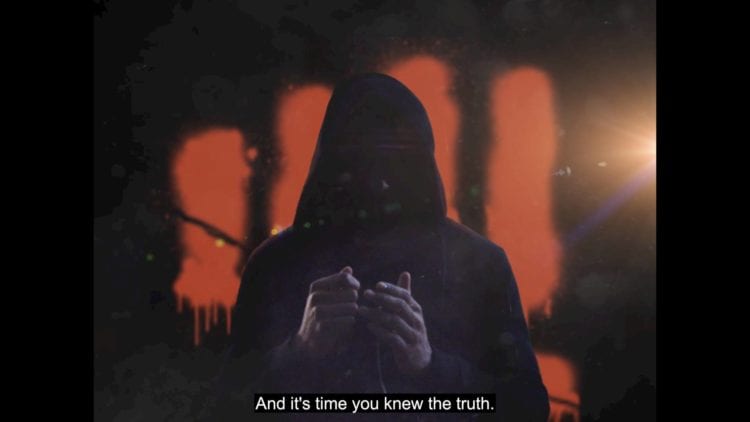 Apparently, Kylo Ren will be turning up in the full version.

Which is where I sit with Not For Broadcast in general. I adore what’s here and I’m loving the resurgence of FMV games, but this is a fairly small slice of the promised content. While I can say that the general studio gameplay is fun and I’m eager to see (and screw up) more broadcasts, it’s hard to say more.

Fingers crossed that the full version will be as over-the-top, riotous, and poignant as the Early Access version promises. But right now, all I can do is put faith in those promises, just like the voters did for the fictional political party in the game. Let’s hope my faith is better rewarded than theirs.

The Witcher animated movie to focus on Geralt’s mentor Vesemir

By Steven Wong3 days ago
News

By Kevin Carignan4 days ago
Previews