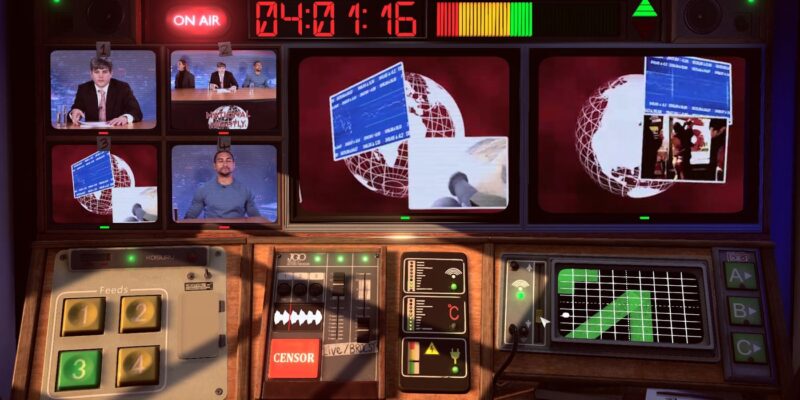 For most developers, it’s relatively easy to make games featuring systems and design standards that players already know. But making a game with a completely original concept that centers around unconventional gameplay poses a much bigger challenge. Developing these projects has huge benefits, though, as gaming has the potential to convey meaningful messages in ways that no other medium can. Those itching to play an original game may find something to appreciate in Not For Broadcast, a title that asks players to manage a propagandistic news program. Not For Broadcast has remained on Steam Early Access for almost a year now, but it will finally see a full release on January 25.

Publisher tinyBuild just posted a new teaser trailer for the game to coincide with the release date announcement. The trailer may makes use of live-action FMV, or full-motion video, which feels reminiscent of some of the old FMV titles that came out on the Sega CD. The number of buttons and other interactive elements on the screen may seem intimidating, but it will likely make more sense to players once they try the game out.

A dystopia with a comedic edge

According to the Steam page, Not For Broadcast functions as “a darkly comedic game of televised chaos that lets you pick what you want to see on TV, no matter what anybody else wants.” Since “egotistical celebrities, dishonest politicians, and strange sponsors” all compete for attention, players will need to decide what goes on the air and “ensure that the show goes on uninterrupted.” To accomplish this, they can “cut between multiple camera feeds, tweak the headlines, bleep the foul language,” and more. Players have a significant degree of freedom in regards to what they choose to broadcast as long as they “can hold the audience’s fickle attention.”

Not For Broadcast presents another dilemma for players to consider in that they will not receive much pay from their bosses. To offset this issue, players may receive help from “some hand-picked (if slightly sketchy) sponsors” that can provide money and a bit of humor. Additionally, players will need to keep the program running even during major emergencies, such as a category 5 storm. Nothing will stop viewers from getting their news, and if serious topics such as war or politics risk bringing their mood down, players will have to make choices to keep them watching. Even “the increasingly panicked chatter of the news crew behind the scenes” should not prevent players from keeping the masses entertained.

In the end, Not For Broadcast seems like a remarkably unique experience, and the fact that the release date is less than two weeks away should be quite exciting for those wanting to try something new. The Early Access version has received “Overwhelmingly Positive” reviews on Steam, which bodes well for the final release.