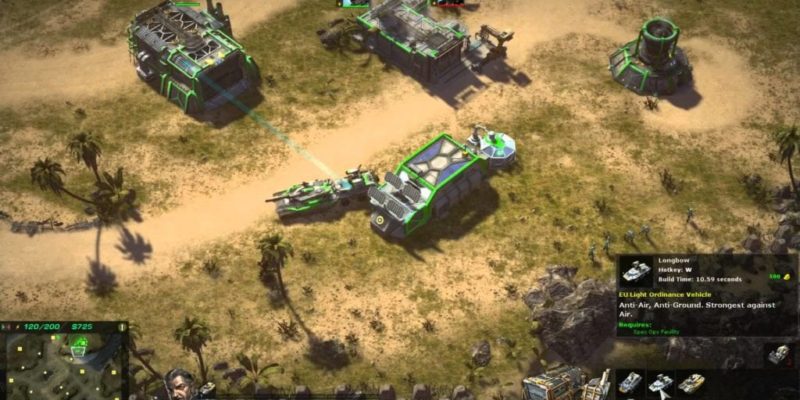 The Command & Conquer franchise is a complete mess. That’s how I feel about it at least. Since the days of Westwood Studios the franchise has gotten worse and worse, finishing with the terrible Command & Conquer 4: Tiberian Twilight. I have to say that the last decent C&C title was Generals and its expansion Zero Hour.

It was with a heavy heart I read Peter’s story on the Command & Conquer cancellation yesterday. I had only been playing the alpha test for around five days, so to say the news was “a little frustrating” is an understatement. The bottom line is that it’s done, and Victory Games are no more. A sad day for the franchise, and a sad day for the team at Victory.

For the past twelve months or so EA has been telling us how this reboot was the way forward – a free to play Command & Conquer that originally began life as C&C Generals 2. A quick rename later and EA were shouting about how this was the Command & Conquer game fans would expect and wanted.

So what’s going on? I wish I could fully answer that question, but it would be pure speculation on my part. To get some sort of idea, it could be beneficial to look at the current market and also what happened with the other canned F2P RTS End of Nations.

I believe that publishers are wary of the traditional RTS gameplay model which began with Dune 2 all those years ago at Westwood Studios. The idea of base building and harvesting for funds appears to strike fear into the hearts of any publisher – apart from Blizzard, who’ve stuck with a tried-and-tested formula for the StarCraft franchise, although there have only been a few releases in that franchise since the first game burst on to the scene.

C&C4 was an experiment that went very wrong, moving away from the fundamental elements that define the C&C franchise and creating a multiplayer game that was just bad on so many levels.

It appeared EA had learned their lessons with the Command & Conquer 4 disaster and news of a reboot of the franchise was welcomed with open arms. The problem with C&C is there are so many games now, all done by different development teams and all different from each other, it’s lost any cohesion.

Although the franchise was split into Red Alert and Command & Conquer, it did work. The game worlds were very different, although the gameplay was essentially the same. The first two Red Alert titles were solid releases that did the C&C name proud… but that didn’t last long.

When Westwood Studios closed and EA took over it looked like the franchise would be saved with the Generals releases, and at least most of the important game elements that define the franchise were kept in one piece.

The new C&C by Victory played like Generals with multiple factions, resource harvesting and base building. It’s a tried-and-tested formula with the main difference being it was free-to-play – and they somehow had to monetise the game through the sale of the different Generals and the powers that come with them. The problem with this model was that the Generals had to be quite different from one other to make them worth the purchase, and this could be where this new C&C came unstuck in the early testing phase.

It’s also worth pointing out that some gameplay modes were to be sold as a premium feature. Even 1v1 matches looked like they were to be locked down. That would have been a pretty nutty move by EA.

Remember TRION’s End of Nations? Many of the development team working on the original version of that worked on the original C&C titles but – out of the blue – the plug was pulled on what could also be considered a more traditional RTS model. The game was brought in-house to TRION and has since been turned into yet another MOBA focusing around single commander units with a very small team of sub units.

TRION obviously felt that the market just wasn’t there for a F2P RTS, and with the rise in popularity of MOBAs, a switch was made to that model. Besides, it would be easier to monetise the game through the sale of single command units than providing whole armies.

So what now for Command & Conquer? I would be extremely disappointed if this great looking game was stripped down to a MOBA. It would be a complete waste of the C&C name. Let’s face it, there are about 10 billion MOBAs out there now with three main titles – Dota 2, League of Legends and Heroes of Newerth – taking up a sizable chunk of the market. It wouldn’t be easy for any title to compete in that space, even C&C.

EA were set to release campaign missions for this new C&C early next year and perhaps they felt that was just giving too much away for free, and that these missions would not satisfy the core fanbase. Right now there are three Generals to play for free from each faction, all very different, and I know I wouldn’t be inclined to purchase the other, slightly different, Generals. I just don’t think it would increase my enjoyment of the game.

Victory Games sum the situation up quite well in their post:

Part of being in a creative team is the understanding that not all of your choices are going to work out. In this case, we shifted the game away from campaign mode and built an economy-based, multiplayer experience. Your feedback from the alpha trial is clear: We are not making the game you want to play. That is why, after much difficult deliberation, we have decided to cease production of this version of the game. Although we deeply respect the great work done by our talented team, ultimately it’s about getting you the game you expect and deserve.

We believe that Command & Conquer is a powerful franchise with huge potential and a great history, and we are determined to get the best game made as soon as possible. To that end, we have already begun looking at a number of alternatives to get the game back on track. We look forward to sharing more news about the franchise as it develops. Thank you again for your participation and support.

Having played every C&C game from start to finish, the campaign was always an important part of the experience and this reboot is not focused on the single player aspect at all. Sure, campaign missions would have been released, but the team likely wouldn’t have had the time to make an engrossing campaign while continually supporting the multiplayer to bring in the cash. Besides, C&C would not be complete without some cheesy custscenes.

EA could now be looking at taking the game from a free-to-play model back to a retail model with a full campaign and a more traditional multiplayer model, as that would at least mean there’s less long-term risk. They get the cash up-front instead of trying to pedal microtransactions and continually come up with new Generals that are only slightly different from the ones already available.

Speaking of cash up front, one of the perks of buying the The Ultimate Collection, which included nearly all previous C&C games, was access to the alpha. As of today there is no word from EA on refunds for anyone who purchased the collection. Many fans bought the collection solely for alpha/beta access and that’s now not available with few players actually having been granted access already. I would hope that EA would refund purchasers of the TUC but we’ll have to wait and see.

This reboot of C&C looked great thanks to the Frostbite Engine and it played pretty well in this Alpha test. Without a larger pool of players it’s hard to tell how well it would be received, but pushing it into a Beta phase and then canning it would probably make the situation worse for fans of the series, the franchise and EA.

Just after putting this article together a former Victory Game employee stated that the decision to cancel the game was “total b.s.” and was “down but just petty corporate politics and shenanigans” which doesn’t sound good for the future of the franchise.

I do hope that EA manage to reshape the game and return the franchise to its former glory. C&C and Red Alert are two of the finest RTS games ever created and Westwood founders Brett Sperry and Louis Castle must be weeping over what’s happened to their franchise over years.

Come on EA! Get your C&C house in order once and for all or at least sell the franchise to someone who actually wants to do something with it.

Henkel to return to Kickstarter with Deathfire: Ruins of Nethermore