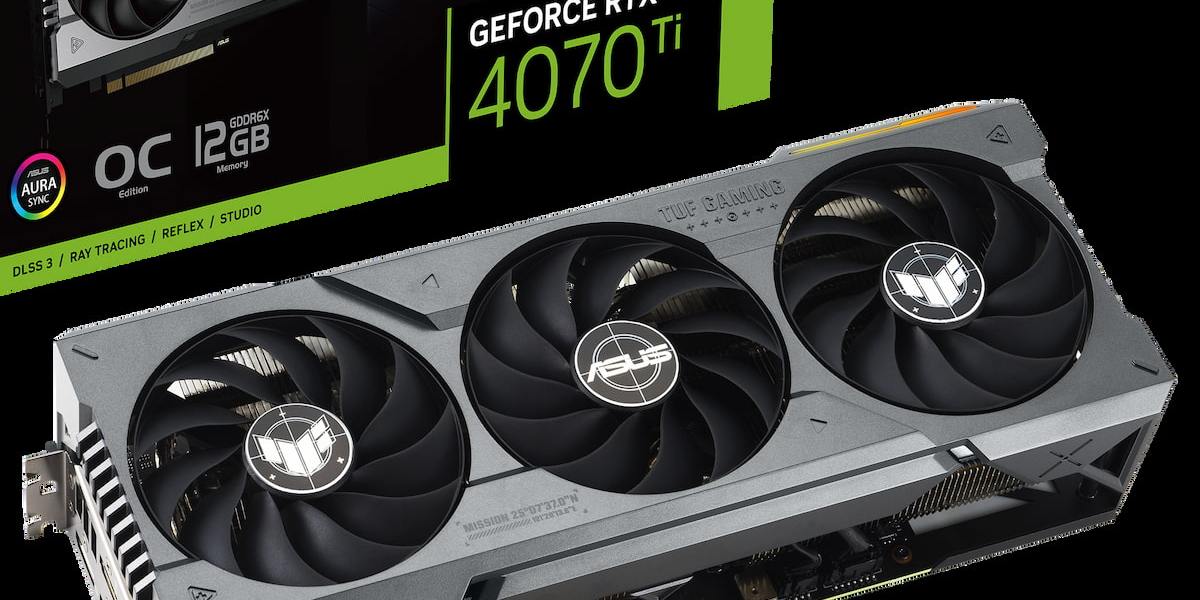 The Nvidia GeForce RTX 4070 Ti is here, and it’s time to take a look at and review everything it has to offer – or not offer – for gamers. With this lineup of 4070 graphics cards, there is no Founders Edition from Nvidia itself, so everyone who’s looking at them received one of the partner cards. For this review, we’re looking at the ASUS TUF OC Edition RTX 4070 Ti.

Why is discount in quotations? Well, that’s because despite its MSRP being $100 USD less than the RTX 4080 12GB when it was announced, there aren’t many available cards that will sit at that $799.99 USD price point. The model we were sent comes in at $849.99 USD, and there are others that cost upwards of $1,000 USD. So you can see why the pricing isn’t really worth being excited about.

But how does the card perform, and will it ultimately be worth your spending cash? Let’s take a look at it from a strictly gaming perspective as a daily driver graphics card.

As stated earlier, there is no Founders Edition of the RTX 4070 Ti. That means the designs are solely at the discretion of Nvidia’s partners. With Asus, its TUF Gaming card features a triple-fan design in a die-cast shroud with an aluminum backplate aimed at keeping the card cooler during heavy use. The card comes in at 305 x 138 x 65 mm (12 x 5.4 x 2.6 in) with a weight of about 2.96 lbs. It’s a 3-slot card, though Asus says it’s a 3.25-slot card, likely to give it more breathing room. In a larger mid-size or full-size tower, you should have more than enough room to fit the card. Anything smaller, you’re likely pushing it.

One nice touch is that Asus included a sturdy magnetic support stand for the GPU to limit any sag or pressure pulling on your motherboard. It also has a screwdriver inside the stand for easy and quick part swaps.

As far as specs go, the card we got matches everything announced by Nvidia. It features 7,680 CUDA cores, 240 4th-gen tensor cores, and 60 3rd-gen RT cores with a 192-bit memory interface and rates up to 21 GB/s. There are a couple of differences from the default specs, however.

On the Asus TUF Gaming OC Edition tested, the card has a boost clock of 2,730 MHz and a built-in overclock speed of 2,760 MHz. Both of which are higher than the listed boost clock of 2,610 MHz. In addition, there are five total display outputs: three DisplayPort 1.4a and two HDMI 2.1.

When testing any new graphics card, it helps that you have a computer capable of getting either the best — or close to the best — performance. As said in past reviews, it also helps to keep things as realistic as possible for the average user who’s considering an upgrade. You want to know exactly what you’re getting.

For this review, we are using the following build:

As far as the results go, you’ll see. This review primarily focuses on 1440p performance because this card is marketed by Nvidia as a top-tier 1440p card. 4K gaming will be talked about, but it’s not this card’s strong suit which is frustrating at the price. And, in all honestly, going into detail on 1080p gaming isn’t worth it because the card will give you any sort of 1080p performance you could hope for.

We tested five games to showcase the ability of the RTX 4070 Ti. Those games were F1 22, Forza Horizon 5, Cyberpunk 2077, A Plague Tale: Requiem, and Microsoft Flight Simulator. To get you a fuller perspective, the games tested were done with DLSS 3 on and off to see what might be best for you. The goal with it is to give you a clear picture of what to expect, no matter the type of game. To capture the information, Nvidia’s FrameView app was used to capture framerates alongside GPU temperatures and voltage in every game.

Connecting the RTX 4070 Ti to your machine is as simple as the last-gen RTX 30-series cards. For the most part, at least. Nvidia still insists on using its full 16-pin 12VHPWR connector. With the card comes a split adapter for two 8-pin PCIe power connectors if you need it for your PSU. Luckily, though, it’s not the oversized four-to-one adapter that the RTX 4090 came with, making it look a lot nicer in your build.

The RTX 4070 Ti is rated for 285W TGP, which makes sense with the recommended PSU being 700W minimum. That said, our testing never really reached close to the 285W TGP, which, in my opinion, is a good thing. Not only does that leave room for overclocking if you’d like, but it also limits the load on your PSU, extending its lifespan. Regarding specific games, the highest wattage hit when benchmarking was 256W

Even the overall temperature the card stayed at was impressive. Now, the temperature has a lot to do with your case size, fan amount, and overall cooling setup. However, despite it being said that the max temperature is 90°C, the highest we were hitting was 68.6°C.

The Nvidia RTX 4070 Ti is a good graphics card, but the price and other options available make it a slight disappointment

Pokémon Scarlet and Violet: How to reset EVs

By Keren Philosophales13 hours ago
Guides

By Martynas Klimas13 hours ago
Reviews