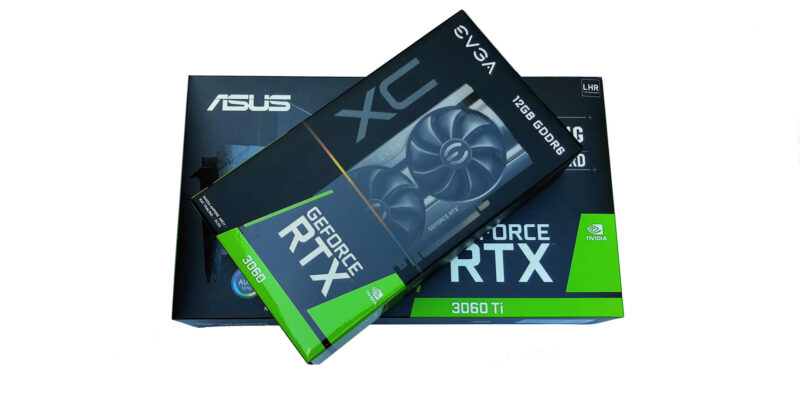 If you’re sick and tired of reading news stories about how difficult it is to find graphics cards and the ongoing supply chain issues for the associated components, this report offers a glimmer of hope. Restock for the Nvidia RTX 30 Series and even the AMD Radeon RX 6000 Series is still coming in regularly at Micro Center retail locations, and we found plenty of graphics cards on shelves today.

The fact that Micro Center regularly receives graphics card shipments is nothing new, but many have likely heard about the long lines and similar availability shortages over the past year. While shipments are still in limited quantities, it seems that demand has tapered off enough to where the chance of buying a current gen graphics card is notably higher now. This was a similar case with the Ryzen 5000 Series CPUs, which sat on shelves at Micro Centers for months before online availability stabilized.

What graphics cards we found

We can only speak to our experiences at the two locations in Atlanta, GA, but there was a decent selection to choose from when we visited the Marietta store today. Micro Center had several AIB models of RTX 3060 and 3060 Tis. We asked about how often other models came in, and were told that the aforementioned models were currently far more common than the illusive 3080s and even 3070s. The Ti variants also tend to show up more often, which likely has to do with the higher profit margins for the companies. As for AMD, there were still plenty of 6600 XTs which tend be more affordable and close to MSRP. We also found plenty of the expensive AIB models to no surprise, which are sadly quite close to scalper prices. Additionally, there were last gen models including RTX 2060s, 1050 Tis, and Radeon RX 5000 Series graphics cards.

The important thing to note is that it’s still hard to find graphics cards for MSRP. EVGA is currently the cheapest manufacturer if you’re focused on affordability, which is presumably due to its cards being manufactured where the current Chinese trade tariffs do not apply. Micro Center does get EVGA cards for the Nvidia RTX 30 Series, but restock schedules tend to be random. 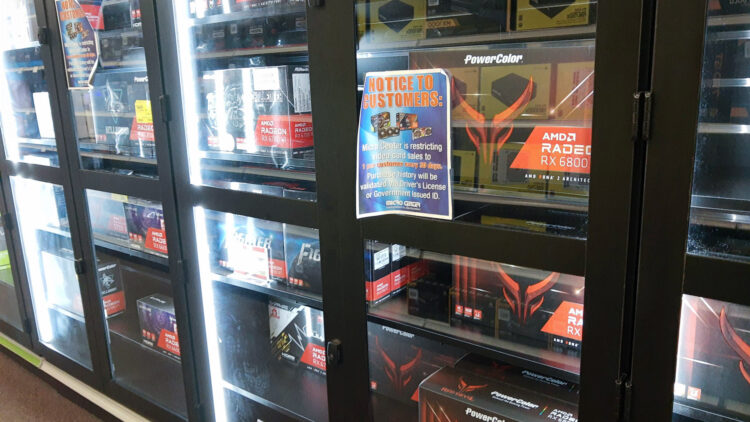 There was a mix of pricey and more affordable AMD cards, but the Nvidia RTX 30 Series remains in short supply.

How to get graphics cards from Micro Center

Of course we understand that this news might not excite quite a few people that don’t live around any Micro Center locations. However, our current understanding of market conditions suggests that it will remain difficult to purchase graphics cards online for the foreseeable future. If you really want something from the RTX 30 Series without fighting bots or paying an arm and a leg, you’ll have to go the extra mile(s) in the literal sense.

Unlike online stores, bots and scalpers can’t just buy up everything from Micro Centers. Customers are limited to a single graphics card purchase per 30 days and must present ID when checking out. This means there’s a much higher ratio of end users buying graphics cards from these stores, so fewer opportunists. We were also told to show up on truck delivery days right before stores open to receive vouchers for graphics cards in stock. While there were lines for graphics cards when we visited today, the store had enough RTX 30 Series stock to satisfy immediate demand.

In our experience, no wait was required to choose from several 3060 and 3060 Ti options, but getting there earlier will better your chances if you want one of the rare models. The important thing is to figure out when the closest store to you receives shipments and plan accordingly. From what we understand, Micro Centers have fixed truck delivery days.

In an ideal world, we’d offer a better solution than a risky long drive, but this seems like one of the best way to get graphics cards for the time being. If you do decide to try your luck, it may be best to make the trip sooner rather than later, as demand is sure to pick back up once cold weather arrives and holiday spending kicks in.

Far Cry 6: How to get the Pistola Sportiva in El Maraton Field

Far Cry 6: How to get the El Florecer in Fontana Fort