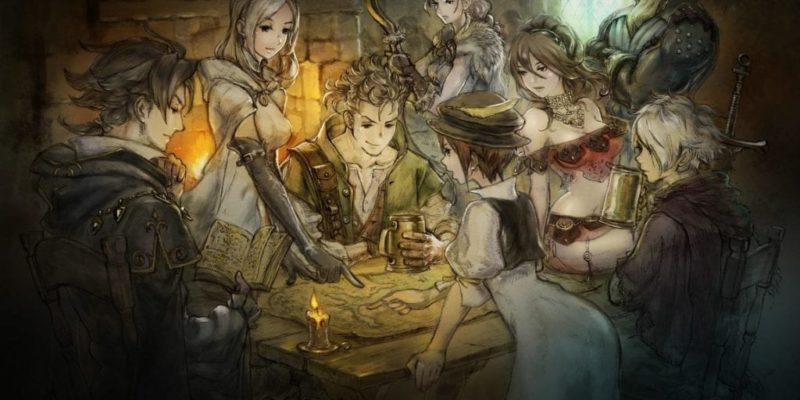 Octopath Traveler is an oddity in so many ways. I mean, for starters, it’s a Switch exclusive that has received a (rather good) PC version long before there are even whispers of other console ports.

On a more concrete note: it’s a retro JRPG that pulls in aged mechanics and then adds a lot of quality-of-life upgrades. It uses the Unreal Engine 4 to provide visual flashiness alongside pixelated 16-bit sprite work. It has eight characters, eight entirely separate plots, and no central protagonist.

Most bizarre of all is that we currently live in an age of sprawling open worlds. Yet I’d argue that Octopath, despite being set in relatively constrained, discrete areas, is fundamentally about exploration. 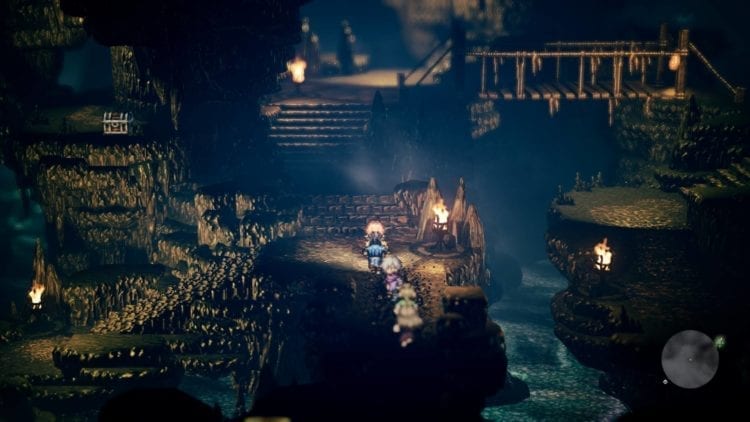 I’m going to try not to harp on about how much I love the art in Octopath Traveler. I’m going to fail.

As noted, there are eight individual stories set in Octopath‘s world, and it’s entirely up to you whose you want to take on at any given time. You start by picking one of the eight characters and doing the opening chapter of their story. From there, you’re free to do whatever you like. You can wander to the neighboring towns to recruit the other characters (by doing their stories, now with the aid of anyone you’ve picked up) or wander elsewhere. The latter is a risky choice, admittedly, at least until you have a full party.

Octopath Traveler does have a cycle to its gameplay. You travel to a new location and start a chapter of a character’s quest. This involves a little bit of wandering around town talking, and then a dungeon and a boss. Then it’s theoretically on to the next town to do the exact same thing. The next chapter of each character’s story usually contains vastly higher-level enemies than the previous one, so you’re encouraged to do everyone’s second chapter before moving on to anyone’s third. Mildly annoying if you’re starting to get invested in any one plot line, and you really need to at least get four party members up to speed before moving any farther afield.

This sounds repetitious and was one of the things that put me off the initial Switch release. It is repetitious, and it’s definitely an issue. On the other hand, I mentioned exploration, and that helps mitigate things somewhat. The way to each town is full of side paths, treasures, dungeons, routes to high-level areas, and sidequest objectives. Most of the time, leveling up for the next chapter is more fun than the chapter itself, simply because you get to wander a beautiful world and find all sorts of little secrets. 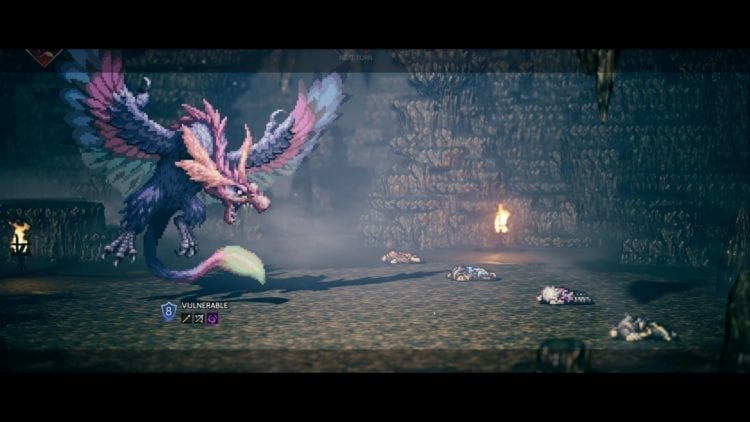 Okay, so wandering off the beaten path may have been a bad idea this time.

The eight characters fit roughly into RPG archetypes. The warrior, the hunter, the thief, the scholar, the cleric, the dancer, the apothecary, and the merchant. They differ, a lot. Aside from their uses in combat and their completely separate stories, they have “Path Actions” that influence the game world.

As an example, Cyrus the scholar can “scrutinize” pretty much every NPC you come across. If he succeeds, then you’ll get some backstory on the character and – often enough – a reward like cheaper inns in the town, expanded item selection in the shops, or simply a hidden item location. Olberic the warrior can challenge people to duels, Therion the thief can pinch their stuff, and Primrose the dancer can “allure” people into joining your party as guest characters. 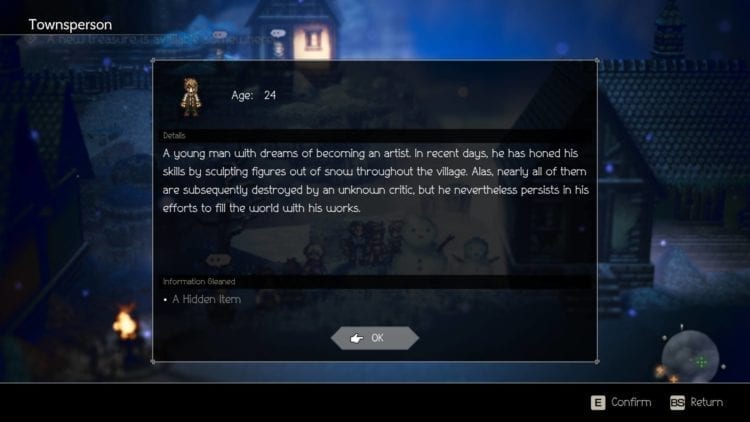 Slightly disappointingly, the other four characters have the same-but-different Path Actions. Your merchant can buy items from NPCs instead of stealing them, which has no risk but costs money, and the other characters’ Actions tend to work by requiring a certain level rather than chance.

It’s a fun little system, but it really comes into play in Octopath Traveler‘s myriad sidequests. Yes, there are some that are simple fetch quests, but others require a bit of thought. A shopkeeper is being harangued by a group of ruffians. You can challenge or provoke them, but they’ll be back. If you’ve spent some time chatting with other NPCs or scrutinizing them for backstory, though, you might realize that the ruffians have been hired to do this, and the person you really need to challenge is lurking elsewhere. Many of them play out like this: using Path Actions to solve issues in ways you normally wouldn’t in a JRPG. 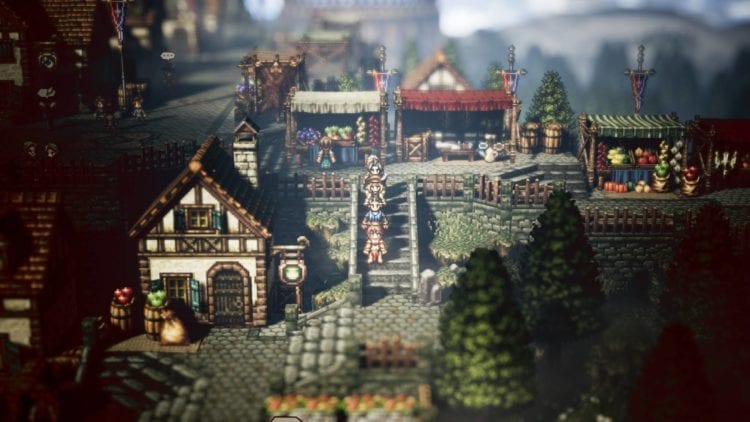 Very little of this would matter if the combat were crap, of course. Thankfully, it isn’t. Octopath‘s combat borrows liberally from a few notable 16-bit titles, but with a slew of modern conveniences and adjustments.

The closest approximation is to something like Shin Megami Tensei‘s weakness system. Every enemy is weak to certain attacks or elements, and blasting their defenses down with these prevents them from acting for a turn and ensures high damage against them.

Additionally, your characters get a Boost point every turn. These can be expended to increase the power of their attacks, or – in the case of standard weapon attacks – allow them to hit more than once. Careful and clever use of these can extend your buffs, heal your party from the brink of death, or break an enemy about to unleash a devastating assault. 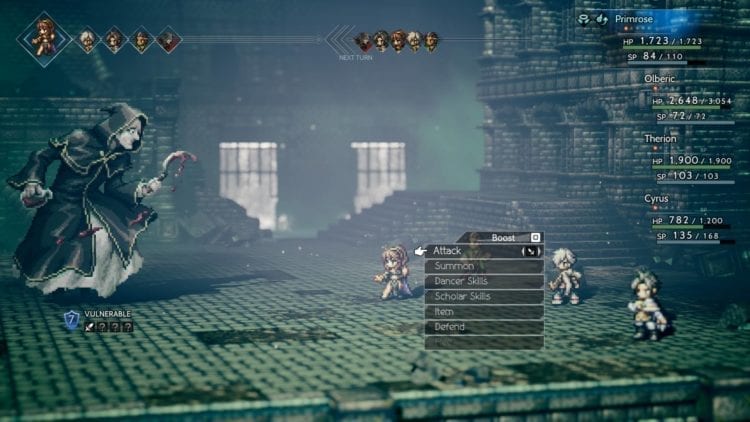 Primrose as a Dancer/Scholar worked nicely for me early on. Also: good grief, I love the sprites. (Okay, that’s the last time.)

And then there’s the multi-classing. Around the second chapter, you’ll start unlocking sub-classes, letting you customize your characters to your heart’s content. Is hulking tank Olberic a bit of a one-trick pony? Give him Cleric as a second job and he can heal everyone. Or give him Thief so that he can steal HP from enemies as he hits them. Or give him merchant so he can Sidestep for guaranteed physical evasion.

Only one character can use a particular secondary job at any given time, so some thought is required as to who you want to be your backup Cleric or Scholar, but there are some arguments to be made for pretty much any combination. Delving deep into this customization is a real treat. 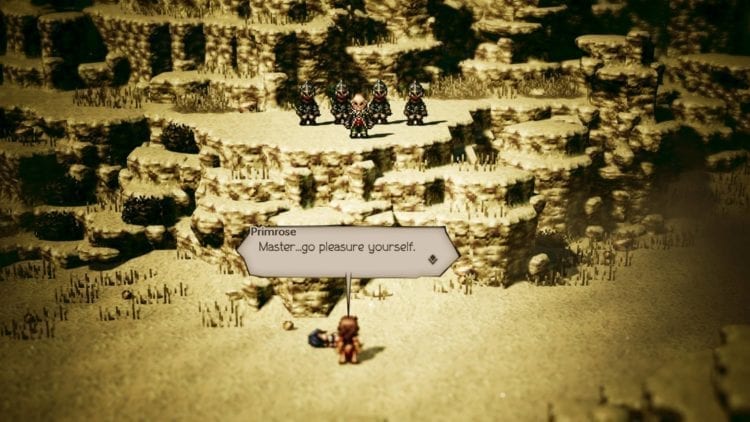 I love revenge stories, so Primrose was an easy choice for me.

And yet I have a lot of nagging problems with Octopath Traveler. Despite my gushing up above, the combat is actually one of them: Battles can take a long time. Bosses, in particular, can feel like 10-20 minute slogs when you have a strategy mapped out and are in no danger of losing. Even some regular battles can take a while when you’re unlucky enough to encounter a damage sponge enemy.

I also really wish there were more effort in making it feel like these eight travelers were actually working together. Not only do their plot lines not intersect at all during the main game, but the stories rarely treat them as even being in the same party.

When you’re doing one of Primrose’s murder-y revenge quest chapters, the only hint that any of the other characters are along for the ride is the very occasional “party banter” option that opens up a brief one-to-one dialogue with a party member. This does little to explain why pious cleric Ophelia is helping Primrose with her murders or Therion with his theft. It’s eight separate stories in one game, but with all eight characters being along for every chapter, it’s a bit jarring when they don’t say or react to anything at all. The only time they come together as a party is during battle, and that’s a serious missed opportunity. 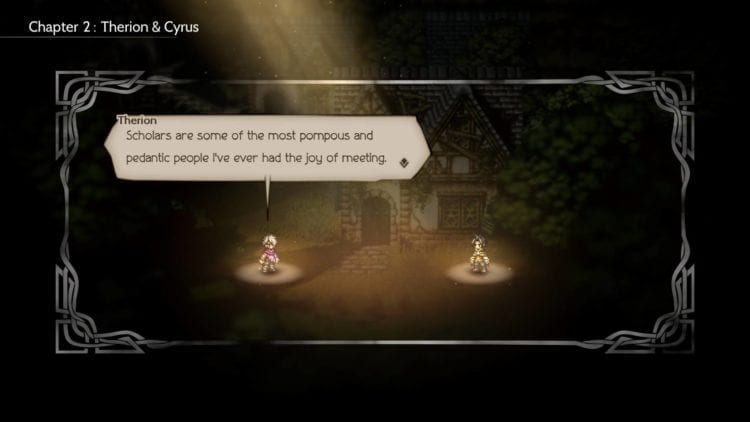 This is the extent of your party interacting with each other. And it doesn’t explain why Therion is helping Cyrus, at all.

Overall, I’d still recommend Octopath Traveler. The stories vary wildly in tone and interest – from Primrose’s murderous attempts to avenge her father, to Tressa’s wide-eyed desires to see the treasures of the world and become a great merchant – but there’s bound to be something in there that clicks with you. The combat system and mechanics are rather well designed, allowing for a lot of depth, and the eight characters all have their own unique quirks both in and out of combat.

I need to spare a moment to talk about the aesthetics, too (as if I haven’t done that enough in the screenshot captions). While the depth-of-field in the foreground annoys me slightly, I love pretty much everything else about the visual and aural design. The tilted camera and gorgeous 2D sprites give the proceedings almost a stage play feel, amped up by the slightly theatrical and over-the-top dialogue. The music, meanwhile, is some of the best “classic” JRPG music I’ve heard in a long, long time, if not some of the best game music full stop. Sweeping orchestral movements have been common lately, so it’s nice to once again hear something with simple, hummable melodies, beautifully performed through a variety of instruments. 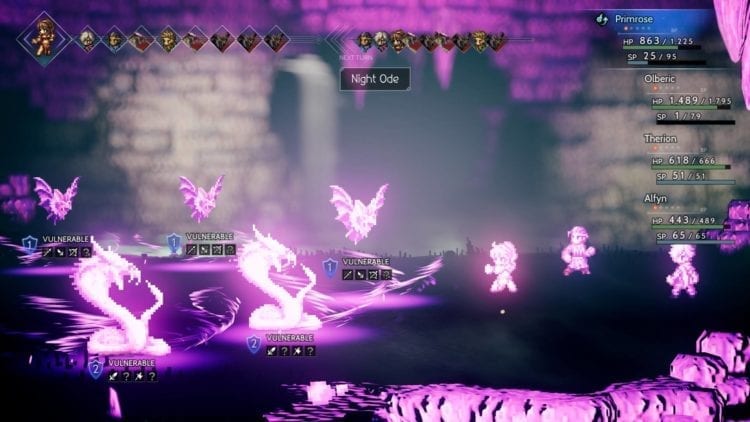 I will admit that some of the combat effects are maybe slightly over the top.

As noted earlier, two things put me off Octopath when it first launched: the separate plotlines and the repetitious cycle of the chapters. Without mincing words, both of these problems are genuine problems. The plot lines don’t come together, instead haphazardly crisscrossing once or twice, which makes this fall short of older attempts at this like SaGa, Suikoden 3, or Dragon Quest IV. If anything, it’s closest to Live A Live‘s vastly different settings, but even that tied everything together and completely separated out its characters.

Equally, while you’re encouraged to explore and take your time, any attempt to simply follow the plot lines will result in heavy railroading and – yes – repetition. If you’re focused on just getting through the game, you’re probably going to get annoyed and tired before a dozen hours have elapsed.

Nonetheless, I don’t have a problem recommending Octopath Traveler to any fan of retro (or retraux) JRPGs. Its flaws limit it, but there’s still an unpolished gem in here, mostly damned by comparison to games that have attempted similar takes on the genre with more success.

Octopath Traveler's beautiful art, music, and in-depth combat system make it a journey worth taking, despite the haphazard plotting and somewhat repetitious nature.