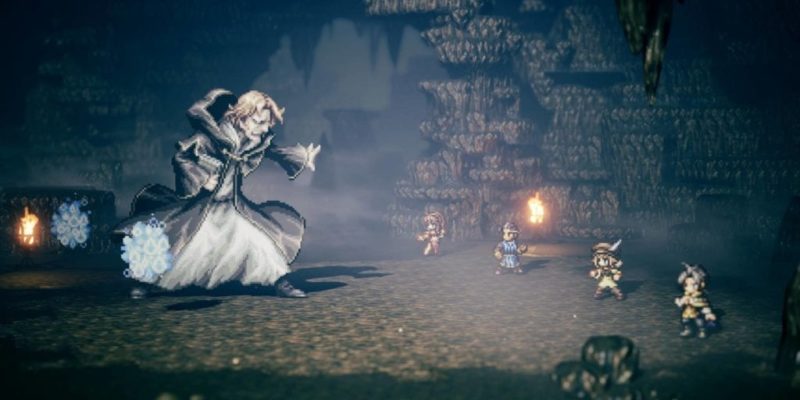 Octopath Traveler coming to PC was one of those rare announcements that outright surprised me. It’s not that I didn’t think it’d happen at some point – sooner or later, we appear to get everything – but it’s a Switch exclusive which hadn’t even been ported to the other consoles. And, less than a year after its launch, we’re told it’s coming to PC.

Not that I’m complaining. I didn’t pick this up on Switch, thinking that this particular JRPG wasn’t really my sort of thing (and you can find out whether I was right or wrong in our review), so a PC release suited me just fine. But only, of course, if it turned out to be a good PC release. A bare-bones PC port locked at low resolutions and demanding a gamepad doesn’t help anyone.

I’m sure there are problems I haven’t experienced, either because of my playstyle or my hardware. However: it’s a good PC release. 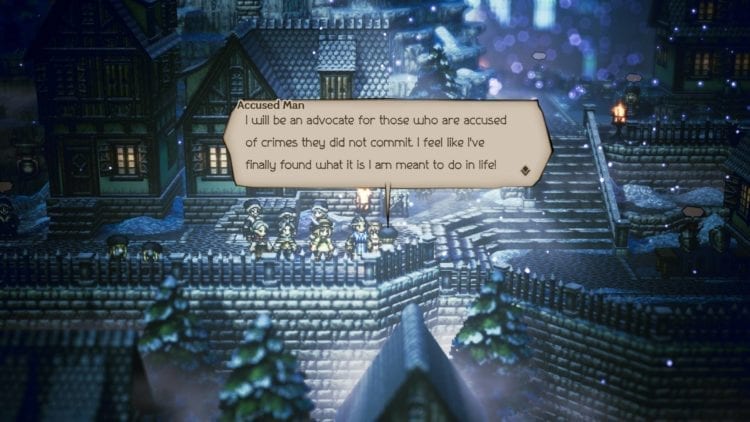 But Octopath can have you inadvertently create lawyers, so that might be a mark against it. 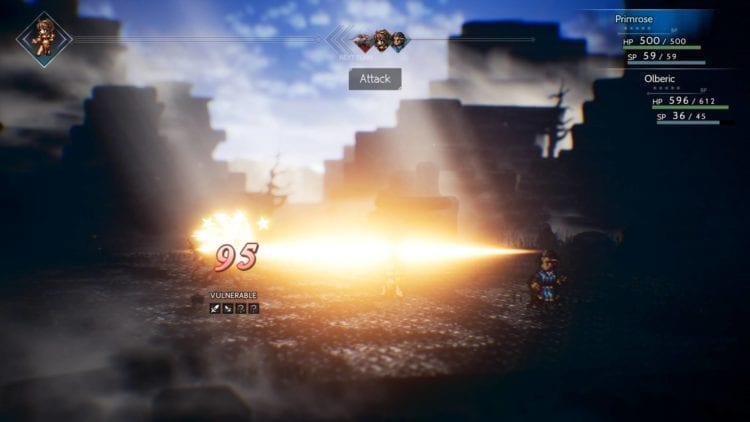 Nice as it looks, it’s only really the Unreal Engine effects that I can see causing much strain on your hardware.

I’m pretty sure I’ve sneezed computers that can run Octopath Traveler, so it’s no real surprise that, in terms of framerate, it runs absolutely flawlessly on my machine. For my part, I was running it in Borderless Windowed mode at 2560×1440. Supposedly, Octopath is capable of running at 4K, though that’s not officially supported and it’s not something I can test.

And yes, as the “recommended” specs note above, it’s locked to 60 FPS. If I’m reading random scraps of information on the internet correctly, all of this is a pretty big step above the Switch version. The Switch release of Octopath Traveler was apparently locked at 30 FPS (with some intermittent frame-pacing issues) with a maximum 720p resolution. So yes, we’ve got some advancements here.

Not that the greater resolution necessarily makes a huge difference when it comes to a game with this sort of art style. But we’ll get to that. Also, the game has a tiny install footprint of about 3.5 GB, which I’m noting simply because of how tiny that really is.

Not quite an Octopath of options

Considering the pedigree, there are a surprising number of options in Octopath Traveler. Some are to be expected for a JRPG (message speed, remember battle cursor position). Others, like the graphics options, are a pleasant surprise. 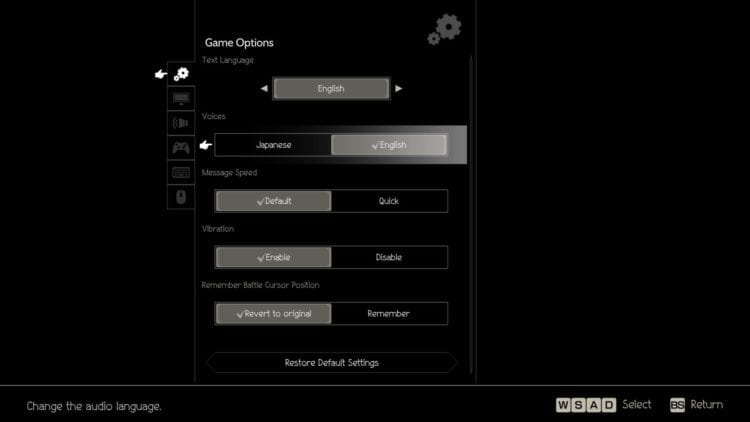 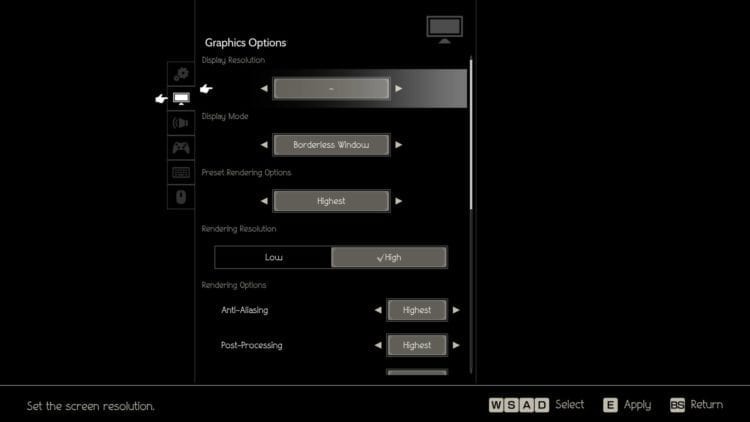 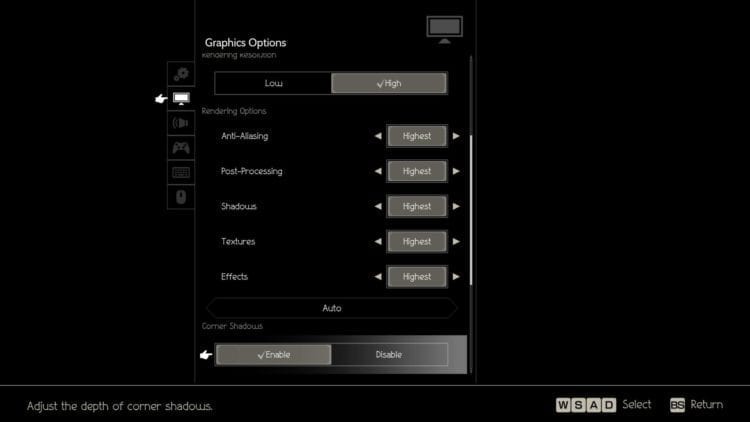 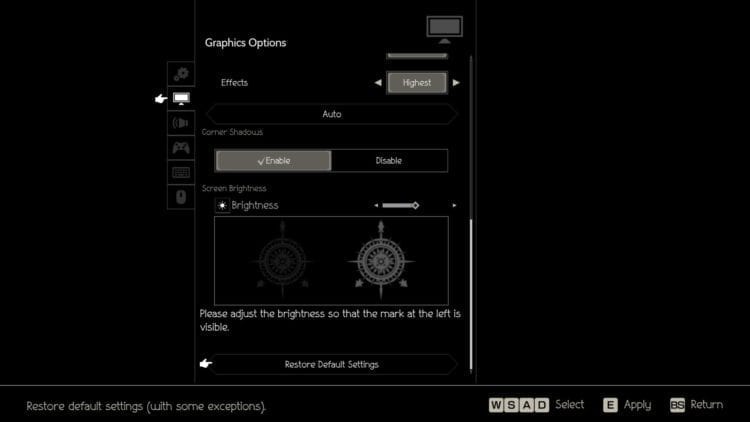 Not that there are too many of them – and they certainly don’t cover all the bases I’d like – but hey, they’re present. Most of these have very definite impacts when you’re looking for them, but again, the very stylistic visuals of the game mean that it looks good regardless of settings. Indeed, I’d argue that on most computers, turning off a lot of these options will be a stylistic choice rather than performance.

The most obvious of the lot is corner shadows, basically adding vignetting to the sides of the screen: 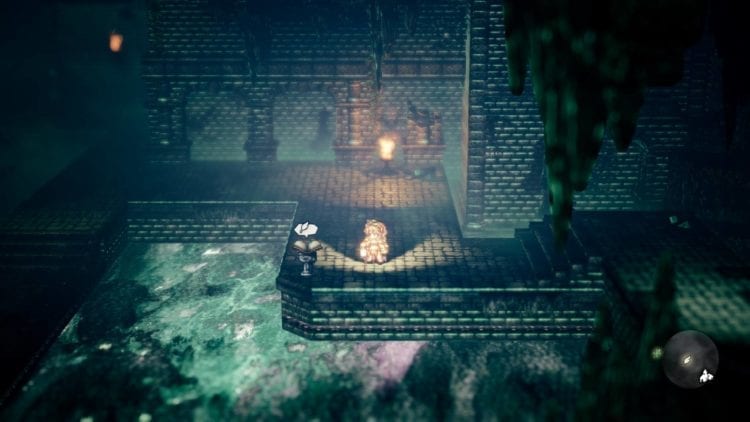 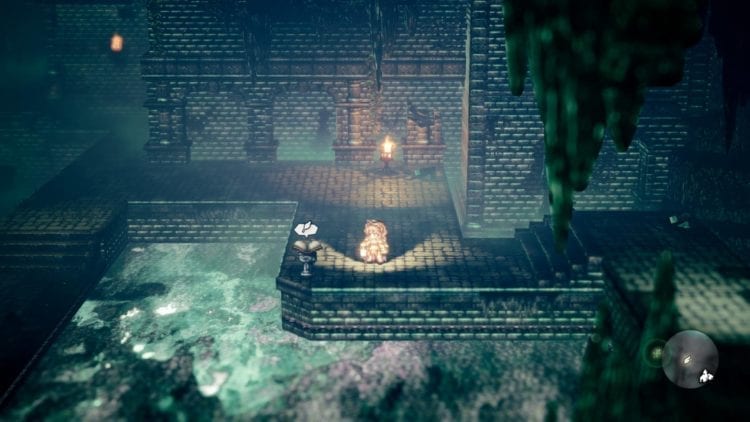 That aside, let’s do the usual and have a look at some comparisons between Octopath Traveler‘s highest and lowest settings. 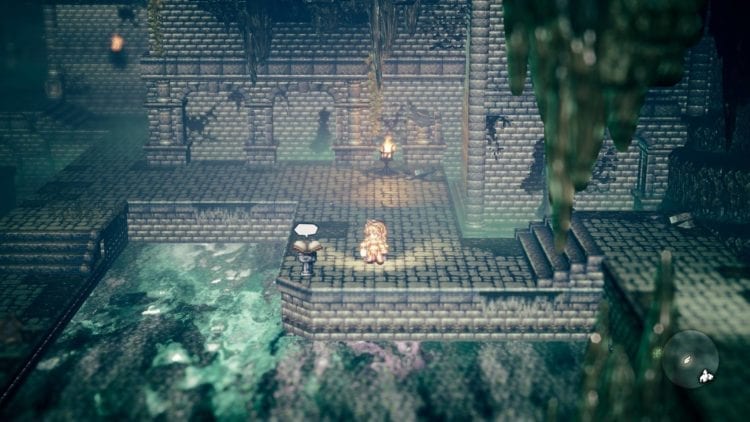 The above shot, with details on lowest. 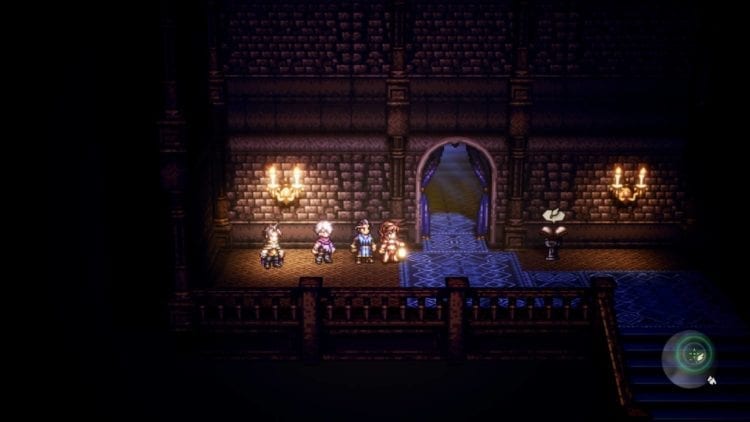 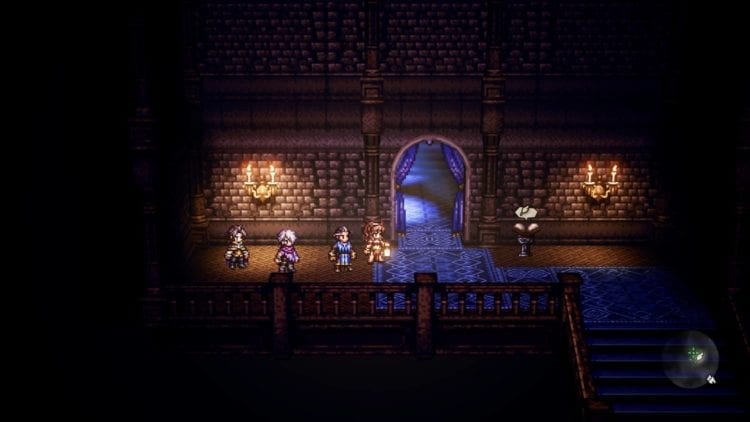 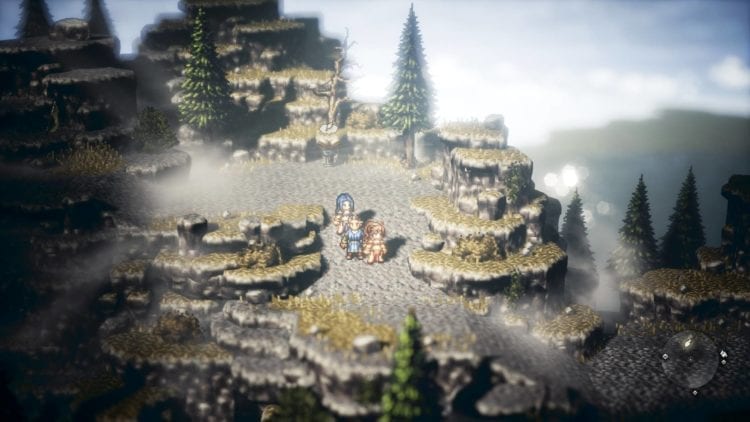 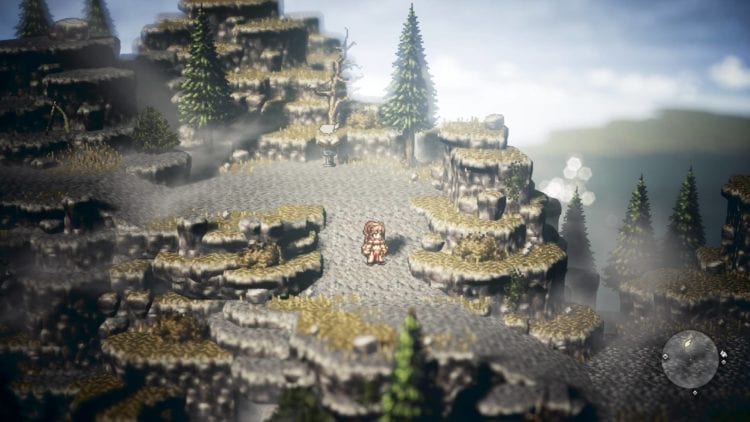 Lowest. Disregard the missing characters; going into the options menu places them behind the lead character. 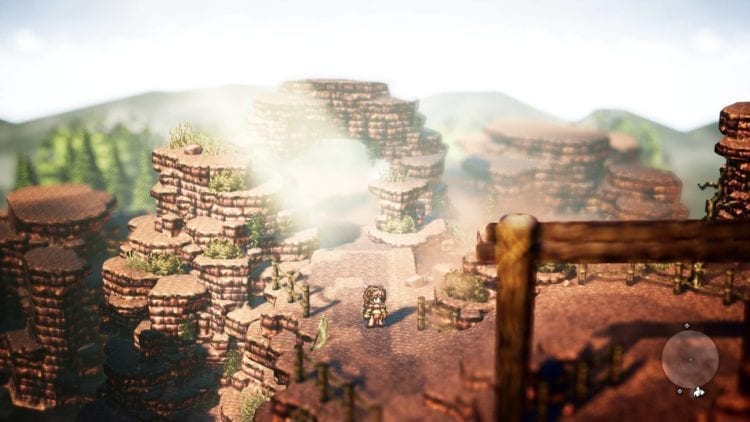 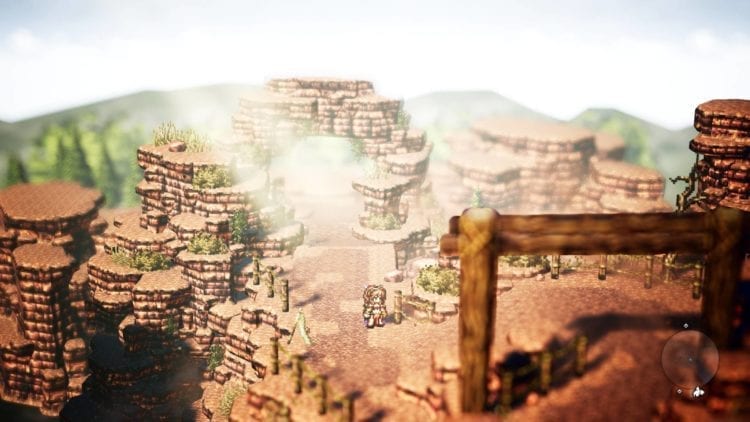 When you look at them side-by-side, differences are pretty noticeable (disregarding corner shadows). Shadows are more pronounced; there’s more bloom; there’s significantly better lighting in dungeons. When you’re not looking at direct comparisons, it’s a lot harder to spot differences. At one point I forgot to put my settings back on high after taking a low-detail screenshot and didn’t notice until the next time I went into the menus.

Truthfully, a lot of the graphical stuff in Octopath Traveler will come down to preference. If you want things a bit brighter and you want the combat effects – particles, flashing lights, massive amounts of illumination – to be a little bit less over-the-top, then you’re not going to get a noticeably worse-looking experience. You’re still getting a 3D world with old-school 2D textures and sprites overlaid on top of it, and there’s only so much modern post-processing effects can do to change that. But for better or worse, there’s no way to turn off the depth of field which blurs the near-side of the screen.

So Octopath runs fine and it looks fine (I’d personally argue it looks bloody lovely, but hey, I have a preference for the style). But how does it control?

Uh, it controls pretty well, actually. Barring a brief dalliance with the gamepad just to make sure it worked, I’ve played exclusively with the mouse and keyboard, and I’ve been tempted to switch entirely to the keyboard. This may be because I’ve played quite a lot of old-school JRPGs entirely with the keyboard, though, so I’m more used to it than most. 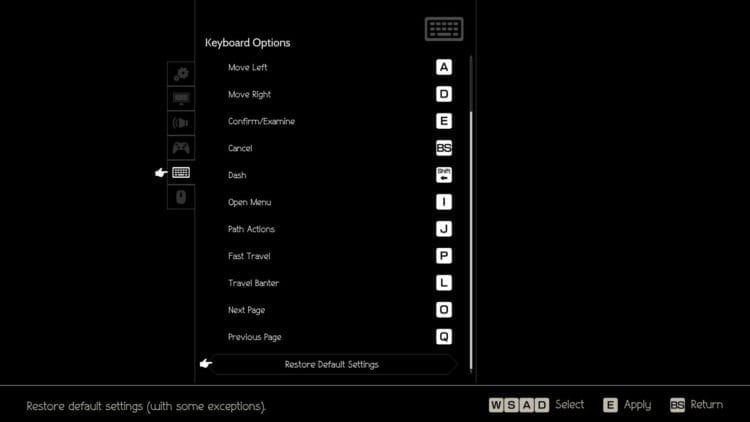 I know it looks bad, but factor in the mouse and…

However, mouse and keyboard functions pretty well as long as you’ve got a fair few buttons on the mouse. With the mouse wheel and two side-buttons, pretty much every option I need is available either within easy reach of WASD or on the mouse itself.

There are two issues with the mouse, though. The first is that while you can rebind the given mouse options to any button, you can’t assign new options to the mouse. I’m not sure I’d want to, but I can’t, say, assign Next Page and Previous Page to the side buttons because there are no Next Page/Previous Page options in the mouse menu. 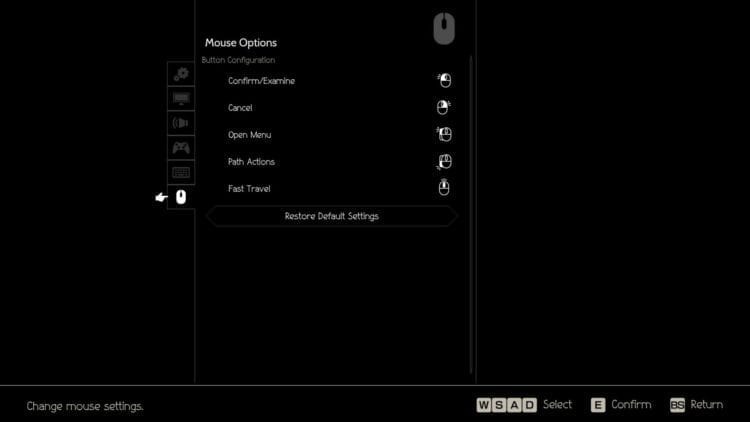 As far as I can tell, there’s no way to add extra buttons to this menu. I may be stupid, however.

The other problem is the mouse wheel. This is a very minor niggle, but scrolling the mouse wheel in a menu does not cycle through the options in that menu. It cycles through the submenus. As an example, if I’m looking at one character’s gear and I decide I want to change their shield, the mouse wheel will not scroll down to that slot. It will instead scroll through the list of characters. It’s… slightly annoying, and I’d guess it’s an artifact of the mouse wheel being used as a direct analog of the shoulder buttons. In a similar vein, there’s no actual mouse cursor support. You’ll be going through the menus by tapping buttons rather than clicking on things directly.

But otherwise, playing Octopath Traveler without a gamepad is simple enough. The camera is in a fixed position, so there’s no issue there. It’s basically all digital buttons, and most of the stuff that’s away from WASD – the path actions, backspace as cancel, and the like – are all bound to the mouse anyway. The mouse wheel even functions to power up or down the boost function in combat, which removes one of the other irritants. About the only complaint is that the game will always default to showing you the keyboard prompts in-game if you’re using mouse and keyboard, so some experimentation may be required. Even then, it’s all simple and workable.

When it comes to ports like this, I’m always wary of giving a firm thumbs up, if only because there’s stuff I’m sure I haven’t encountered. I haven’t tested at 4K, tried it on an AMD card, or attempted to find weirdness like Dragon Quest-style horse spinning. I honestly haven’t hit any problems of note, barring maybe having to adjust the audio balance because the voices were too quiet. But being that I can only base this on my own experience: Octopath Traveler has a more than serviceable PC port which seems to fix a bunch of the Switch version’s minor technical issues.

By Andrew Farrell6 days ago
Tech