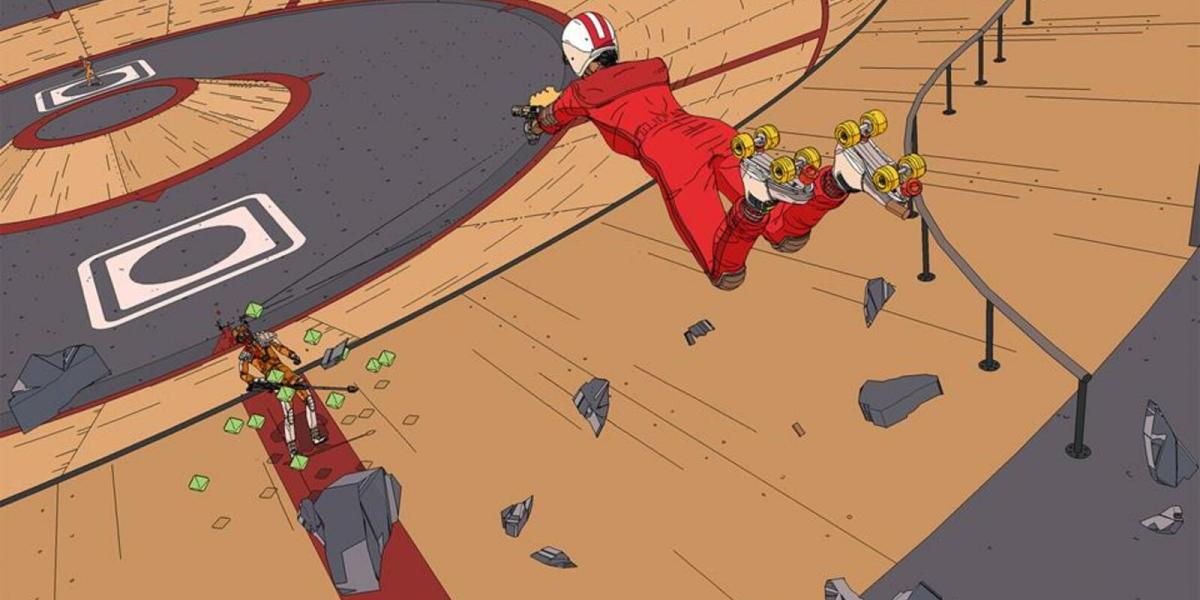 One of the more intriguing games announced during yesterday’s State of Play presentation came in the form of Rollerdrome. This stylish new game comes from Roll7, the developer behind the well-received OlliOlli series, including the fantastic OlliOlli World. Much like those games, Rollerdrome places an emphasis on skating, but it distinguishes itself by mixing that expressive style of gameplay with high-octane third-person shooting. It certainly seems like a fun premise that provides a welcome contrast to OlliOlli World‘s more laid-back vibe. Interestingly, even though Roll7 is still working on DLC for OlliOlli World, the developer already has Rollerdrome slated for a release on August 16.

Those who have played OlliOlli World will immediately notice the visual similarities between it and Rollerdrome. Both have a cel-shaded aesthetic propped up by bold color choices. But whereas OlliOlli World boasted an inviting, cartoony art style, Rollerdrome incorporates some of that game’s design sensibilities to produce a more comic book-esque look. Environments all have a layer of grit to them, and the more realistic character models contrast greatly from OlliOlli World’s Adventure Time-style character designs.

It’s not just about the looks

As for the game itself, Rollerdrome challenges players to continuously rack up kills and perform stylish tricks and grinds. Killing enemies will reward players with health, while tricks and grinds reward players with extra ammo, so there is a constant incentive to engage with the game aside from points or standard completion. Unsurprisingly, Rollerdrome has a fairly simple story, as it involves a corporate-led futuristic world and a deadly blood sport.

Thanks to the striking visuals, novel gameplay premise, and other factors, players have plenty of reasons to look forward to the release of Rollerdrome. Roll7 has already proven itself to be an incredibly capable development studio in the past, so the chances that Rollerdrome will turn out well are quite high.

Rollerdrome should be available on PC when it, erm, rolls out. The game still has a ways to go, but thankfully the wait is only about two months and change.

Steam Next Fest’s summer edition kicks off next week