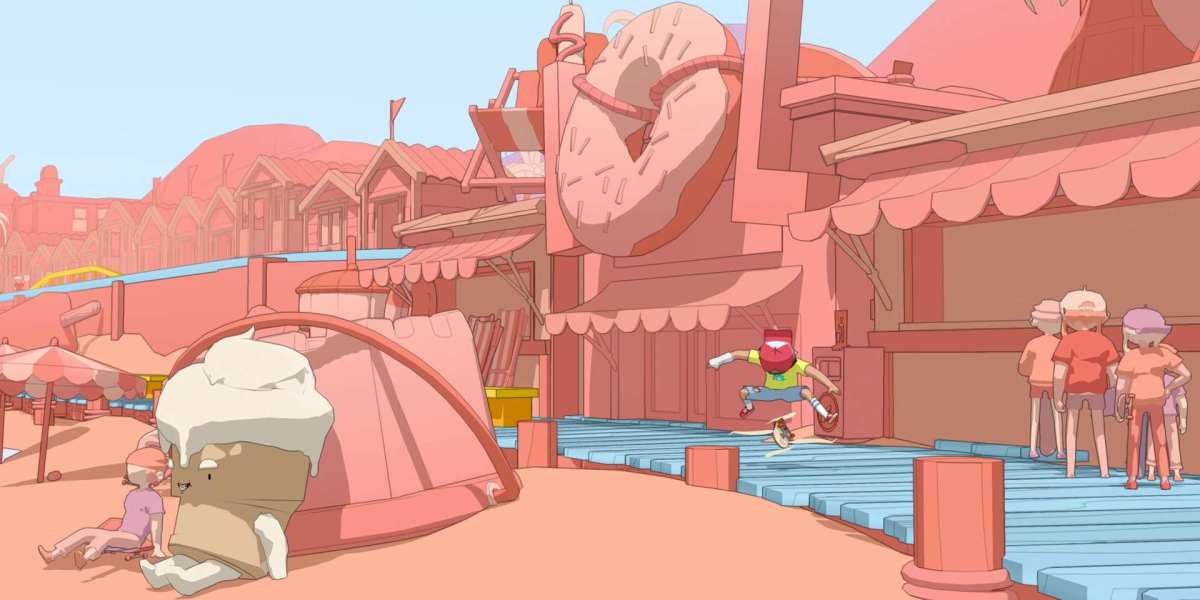 Playing an early demo for OlliOlli World for the first time feels a lot like entering a kind of zany cartoon wonderland, which is precisely what developer Roll7 is aiming for. The third installment of the skateboarding franchise stands worlds apart (no pun intended) from its predecessors with its 3D graphics, bright colors, and cast of characters. According to Roll7 co-CEO and co-founder Tom Hegarty, the studio wanted to diverge from the traditional super-tough gameplay that defined previous OlliOlli games and present a skateboarding game that’s more approachable for more casual players like me.

“We had people who played the original [games], and they just get to a wall,” Hegarty explained, speaking to PC Invasion. “They would get into the flow of the titles, then they couldn’t get past the second zone or something like that. We wanted to create an experience that caters to that skill level.”

Instead of starting with the “skateboarding is hard” standpoint, OlliOlli World is based on the premise that skateboarding is fundamentally fun. Advanced players can still seek out tough challenges and earn points for big rewards, though. At the same time, less skilled individuals won’t feel punished for not sticking the landing each time. New features such as quarter pipes, moving obstacles, and multi-pathed levels, are balanced out. Plus, moves feel more forgiving. The game has a relatively straightforward 10-level campaign path for those who don’t wish to uncover complex challenges right away.

Another key element for casual players is the landing mechanic. In previous games, you would slam into the ground if you didn’t press land at precisely the right moment. That landing mechanic still exists in a way. You can score higher points and go on more complex runs if you master the moves and time things perfectly. However, you won’t brutally faceplant if you forget to press the button, either. There’s also more freedom to do different tricks and stray from the preset path the developers set up.

“But if you still want to go hard as nails with bleeding fingers, there’s still the ability to do that and there are lots of different ways we’ve worked that through,” said Hegarty. He emphasized that the game will have more mechanical depth and improved visuals for old moves. New elements also include quarter pipes, moving obstacles, and multi-pathed levels.

Grinding through the world

The game takes you to Radlandia, which includes residents such as banana people, talking fish, frogs, and tree people. It’s a living environment where pedestrians may cheer you on as you go zooming by. OlliOlli World is comprised of five distinct biomes, each with a unique style, obstacles, and skateboarding crews. You’ll learn new moves and overcome challenges in each before taking on boss challenges that unlock new regions. 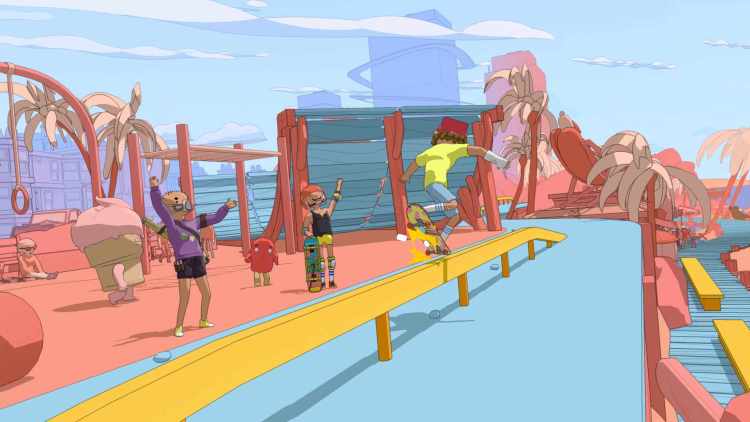 Bystanders cheer you on as you skate.

You start in the sunny beachside region of Sunshine Valley to learn the basics. As one might expect, it’s a fairly laid-back environment with winding boardwalks that can have absurdly high rails sticking out from them. The introduction did an excellent job of gradually easing me into the basics. My virtual skateboarding skills are extremely limited. I often found myself falling down the same holes while grinding down rails, but I never felt discouraged from getting better.

Although, I did experience some tunnel vision while speeding through some of the challenges. Even as I replayed levels, concentrating on landing my movies made objects like the quarter pipes and floating cat balloon collectables very easy to miss. Still, if Roll7’s aim is to give less-experienced players something to aspire to while high-level ones can take on epic challenges, then I consider this skateboarding game demo to be a sign of success.

A big part of that has to do with the newly implemented checkpoint system that brought me back to a nearby spot instead of forcing me to start the challenge all over again like in previous games. But I can’t help thinking that the fun art style plays a critical role too. The 3D graphics mark a major departure from Roll7’s traditional style, which is mostly comprised of 2D and pixel art games.

Hegarty said that the whacky art and cartoon vibe took inspiration from comic artists such as Taiyō Matsumoto, along with shows and games like Midnight Gospel on Netflix or Night in the Woods. By combining elements from different inspirations, Roll7 developed its own style. 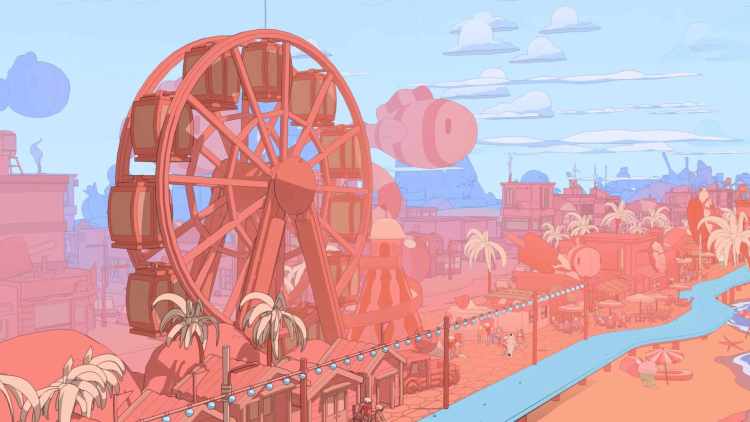 Sunshine Valley, where it all begins.

Going 3D also allows Roll7 to take advantage of spaces away and toward the camera. For example, one of the early challenges had me twisting across adjacent paths that made me feel like I was quickly descending a giant hill. There are also some areas where I could choose to take one path instead of another. Some loop back to the main path, but others might lead to all-new areas and characters which can unlock different challenges. In the demo, choosing a different path brought me to Sloshtar, the fortunetelling fish who kindly added a new location to my map.

Hegarty added that the 3D art style also allowed the game to open different parts of the world at different times, which encourages players to revisit past levels to complete side quests given to them by NPCs – many of whom you don’t discover unless you go exploring. Hegarty likened this to the thrill of finding a new spot or locating a place rumored to have a great rail. Side quests become more complex as the game progresses. They can range from unlocking completely new levels to revealing hidden areas in explored areas, but not all of the challenges are obvious. For instance, pulling off a trick like looping twice in a certain area might earn you a rare collectible.

“[The art style] has allowed us to be playful with the different kinds of environments and create vibrant, lush worlds,” he said, adding that, “It really adds color to the world, in terms of meeting characters and giving you a reason to go back and forth.” 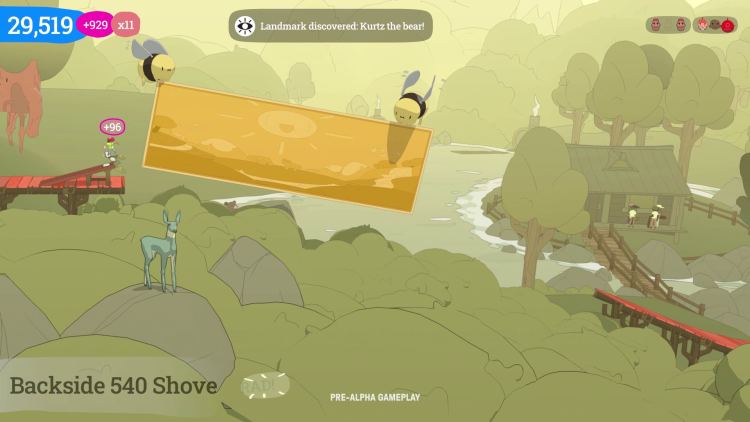 Later on, the demo took me to the idyllic forests of Cloverbrook, populated by sentient trees, with a story about how they’re turning into skateboards. Huge bees hold up wall roads as tree families wander around the background. Biome-specific challenges include chasing a bee to knock a frog off it. Yes, things can get a little strange, but you quickly get used to it.

Other biomes include the industrial seaside of Skechside and the bright Vegas-inspired city of Los Vulgas.

Perhaps the most significant element of OlliOlli World is the emphasis on story, which is another first for the series. Radlandia was created by the immortal skate gods, who are represented by the legendary skate wizard, Chiffon. She recently announced her retirement and is holding try-outs for her replacement. As these things tend to go, you’re a top contender, even when starting nominal skating skills. As part of your journey to skate wizardhood, you join with Chiffon and a skate crew to travel the land to take on a variety of challenges.

Your crew includes Dad, who isn’t actually your dad, but is a guy who happens to be your personal merchant. Gnarly Mike is your hype man and often tosses out challenges for you. The snarky videographer Suze and her living camera encourage you to perform your moves perfectly for her videos. 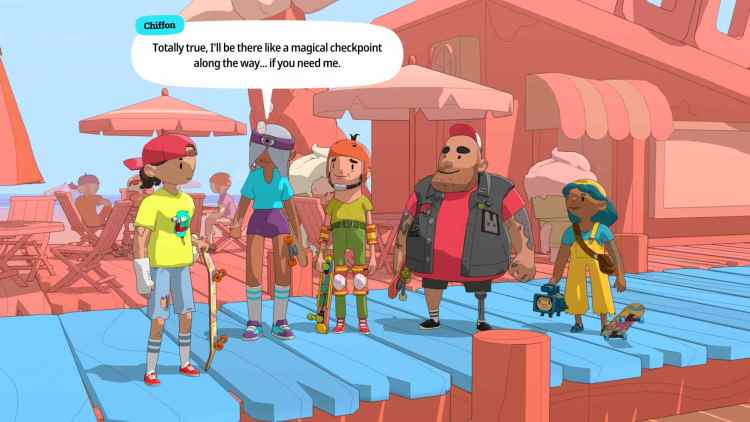 Adding a crew makes the levels and elements of OlliOlli World feel more organic. Instead of playing through a series of arbitrary levels, you have a narrative path to guide you, characters that present you with challenges, and various skate crews that teach you new moves. Best of all, Skate Wizard Chiffon is personally responsible for the checkpoint system. Whenever you slam into the ground she magically respawns you, unharmed.

Hegarty also pointed out that the chill music was important for setting up the general vibe of the game.

“We want you to open up the game and say, ‘I feel Zen. I feel at peace.’ That links into the flow of the gameplay,” he said.

OlliOlli World is expected to launch this winter and can be wishlisted on Steam.