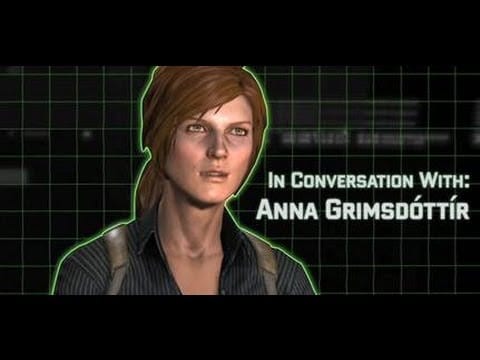 I’m slightly unnerved that Sam has gone from an aging, grizzled, sardonic Special Forces type to something significantly younger with the wrong voice, even though Splinter Cell: Blacklist is set after the other games. I’m a little bit less unnerved by Anna Grimsdóttir – Grim – if only because it seems like she’s been getting younger in every single game since the first. Does aging work backwards in Splinter Cell, or something?

Either way, Ubisoft have profiled her latest, youngest-looking iteration in a video interview with Kate Drummond, the actress who plays her both in voice and in mocap. Marvel! At how Grim looks younger now that she did in Splinter Cell. Wonder! At the description of her as having “that real little-sister scrappiness” when, if the game is set in 2013, she’s 39. Be slightly unnerved! At the fact that Drummond looks almost exactly like someone I went to school with. Or maybe that’s just me. You probably shouldn’t be unnerved by that unless you also went to school with me.

All mocking aside for 30 seconds or so, it’s a vaguely interesting look at what Grim’s getting up to in this game, as well as a decent introduction to her relationship with Sam and the other characters for those new to the series. It is below.

Splinter Cell: Blacklist is due out on 20 August, by which time Grim will probably have reverse-aged enough that she’ll look about 14. (I’m genuinely eager to give the game a try, but I’m readying my snark warheads anyway. Lack of Michael Ironside and characters looking younger while canonically getting older does this to me.)

By Tim McDonald25 mins ago
Features