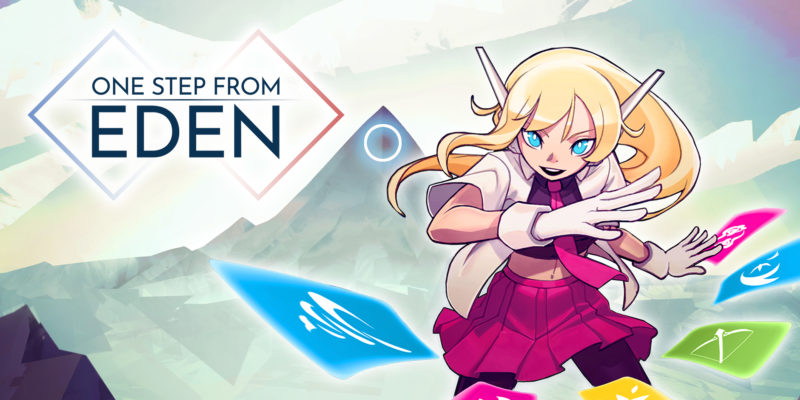 I’m not very good at One Step From Eden. A lot is going on in this game, and I’ve decided that I’m just not very efficient at deciding exactly what I need to do to win, whether that’s choosing the right cards for my deck or memorizing the attack patterns of relentless bosses. Despite the difficulty and the steep learning curve, however, it’s quite a fun game. 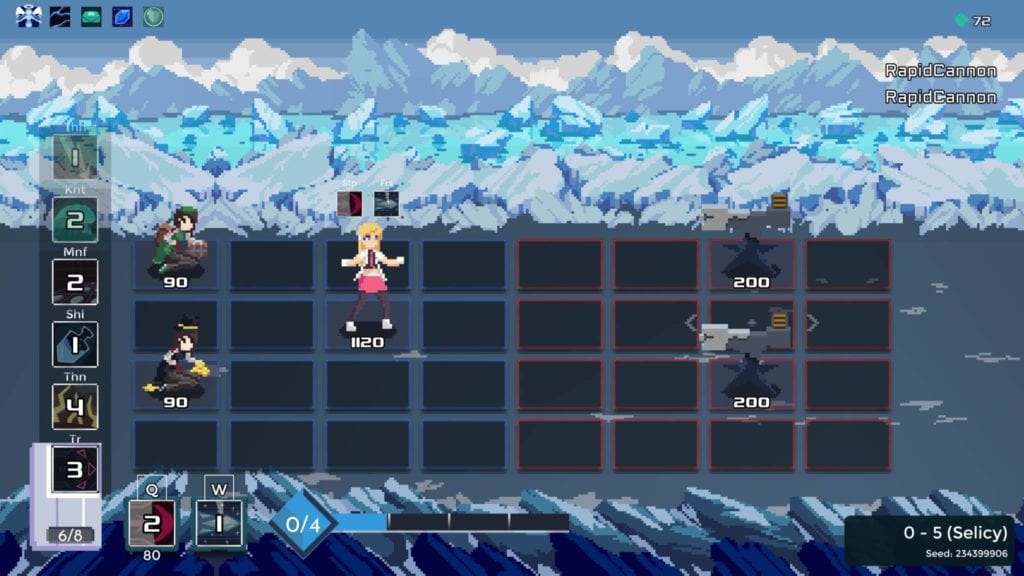 Combat takes place on a 4×8 grid divided into your side and the enemy side.

One Step From Eden is a mash-up of a few different genres. Mega Man Battle Network is the most obvious influence, although I never had the pleasure of playing the original game. Admittedly, that might contribute to some of my confusion. Combat takes place on a 4×8 grid, divided into your side and the enemy side, which are blue and red respectively. Slay the Spire is another influence. Once you finish a fight, you progress across a branching path that can lead you to boss fights, shopkeepers, or campfires where you can rest and heal.

You start with only one playable character, Saffron, but you unlock more as you progress. You can unlock other things for each character, such as outfits or a different beginning loadout. The second loadout for Saffron swaps out her basic energy gun for a device that slows time. It was useful for boss fights and probably better for experienced players, but I found I enjoyed the guaranteed DPS from her first loadout more. 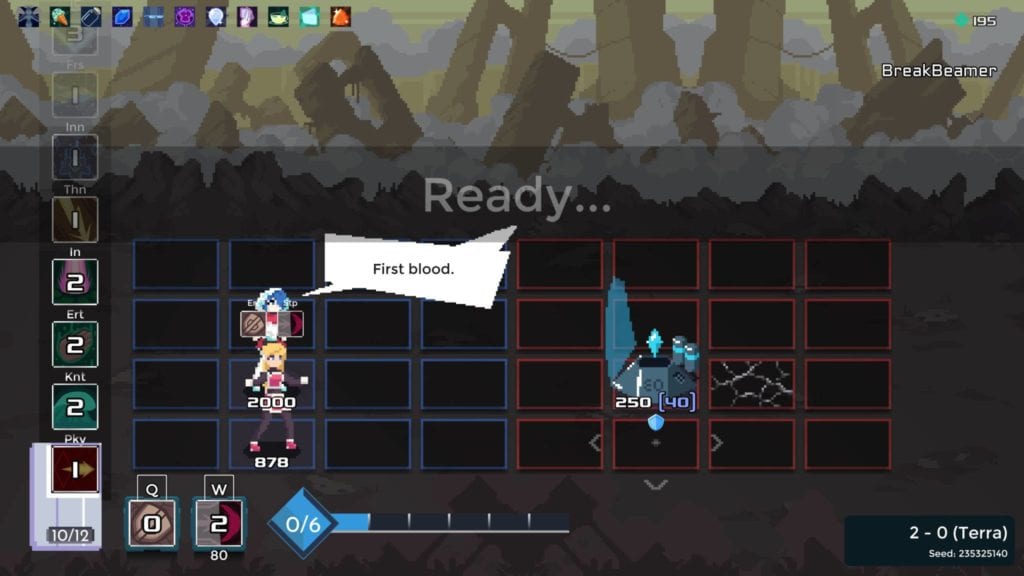 If you spare a boss after you defeat them, they might come back to help you in future fights.

Combat in One Step From Eden is frantic. Fast-paced doesn’t even begin to describe it. You only have two cards equipped at once, but once you use a card in battle, another fills its place. You have to pay attention to your deck, which shows you what cards will show up next so that you can plan accordingly. Of course, you’re expected to do that while dodging constant enemy attacks, planning attacks of your own, and trying to launch precise attacks against enemies. And you’ll be dodging a lot, too; health is a rare resource, so it’s often more important to step out of the way of an attack than to try and hit the enemy.

Despite the overwhelming nature of the combat, it’s fun. Successfully dodging an enemy attack and launching a counter-strike of your own is extremely satisfying, especially with a high-damage thunder strike card. And just when you think you’ve started to learn how to play the game, it throws another curve ball at you. On one of my best runs, I ran into a boss who made me dance by following markers on the grids. If I messed up the dance, then she dealt a high-damage attack; if I performed it correctly, then she was left open for a barrage of attacks. Let’s just say I didn’t defeat her until our second encounter. 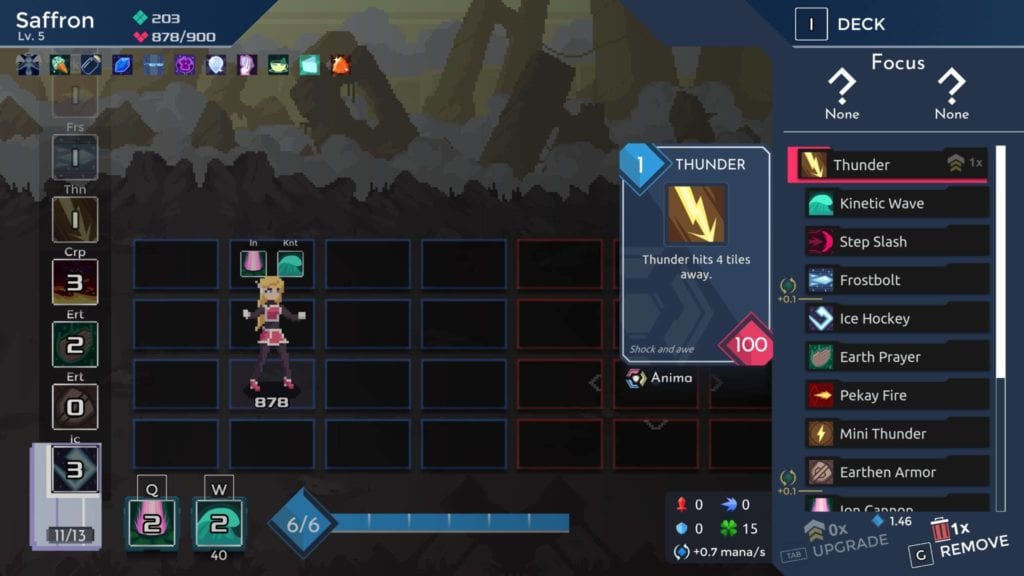 You can choose to focus on specific card sets, such as Anima, to boost your chances of finding those types.

The most perplexing part of One Step From Eden is its card system. There are a wide variety of spells and, as a result, a huge amount of synergies. I’ve only begun to scratch the surface of the available combinations. During my playthroughs, I tried to focus on Anima cards. Anima cards involve frost, flame, and thunder, which I thought were a relatively safe bet for a beginner. It’s important to plan ahead with what cards you have in your deck, or else you might end up with a lot of cards that don’t work that well together.

Good luck remembering exactly what every single card does, as well. It takes a long time to wrap your head around all the cards. It’s just that there are so many different cards, and you usually unlock one or two more after each playthrough, win or lose.

The most basic synergies were obvious. Some artifacts allowed me to regain mana whenever I apply frost to an enemy, while another I picked up increased mana regeneration whenever I dealt flame damage. Some cards allow you to briefly enter the enemy grid. These cards are usually described as damaging attacks, but I found them to be best used to avoid powerful boss attacks that sometimes cover your entire grid. All in all, it’s an intriguing system, and the depth of cards and various combinations, combined with the different playable characters, should provide high replay value for industrious players who are good at the game.

A thousand steps from Eden 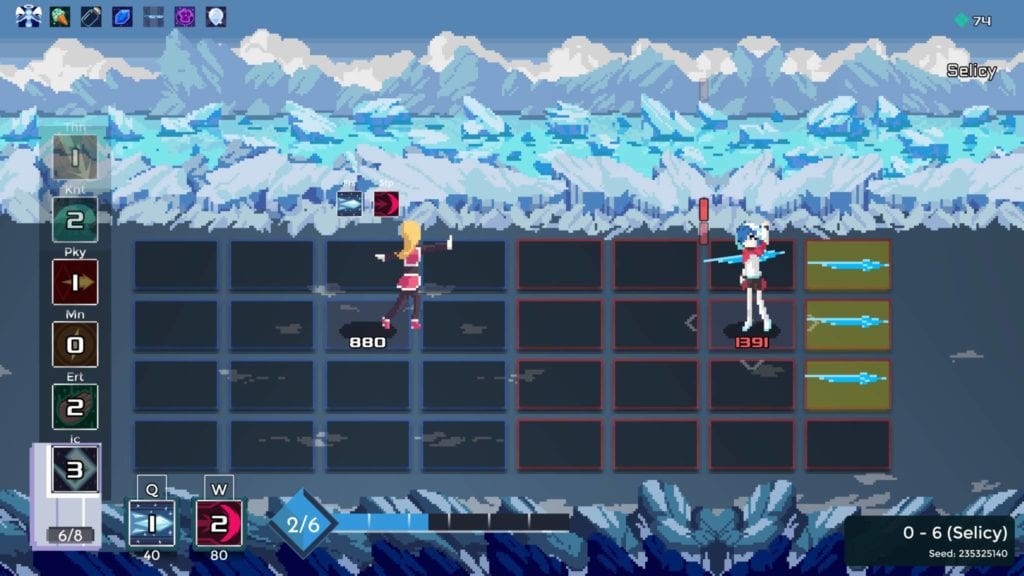 Powerful attacks typically flash for a moment to warn you they are about to strike.

However, the card system is also perhaps too confusing. The game does a poor job of describing the card effects exactly. Cards provide you with resources called Jam, Anchor, Flow, and many more. Some cards describe the effects, such as Anchor, but I’ve been perplexed about Flow since the very beginning. Through trial and error, I think I’ve determined that it simply exists as a resource to empower other cards. However, it would be useful to have the game explain these systems from the beginning.

The combat could perhaps use some fine-tuning as well. The difficulty was very punishing, and I found it difficult to progress through the stages. I never quite made it to Eden, although with more time and an evolving understanding of the gameplay mechanics, I might come close.

Overall, One Step From Eden is an exciting game. It’s overflowing with attentive thought in regards to its card system, although I do wish that it were more welcoming to newcomers. Fans of fast-paced roguelikes should pay attention to it, especially for its unique gameplay that rewards careful planning and preparation.

One Step From Eden

One Step From Eden provides a unique, fast-paced experience. The combat and deck-building are fun, but it does a poor job explaining game mechanics, and given the depth of the game's card system that makes it a little bit too difficult.