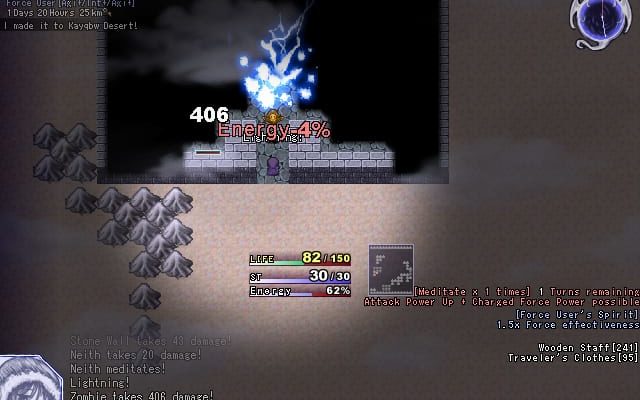 A game you’ve probably never heard of has received an expansion pack, making One Way Heroics bigger than before. Particularly to the right.

I’m a bit sad that you’ve probably never heard of One Way Heroics, because it’s brilliant. It’s a roguelike/roguelike-like/roguelite in which a cloud of encroaching doom is proceeding from the left of the map to the right, so you have to keep forging ahead. To the right. Along the way you’ll venture into dungeons, stop off in towns, beat up monsters, and just generally level up and get stronger – while occasionally fleeing from the villain, until you’re strong enough to take him on.

One Way Heroics Plus adds in three more classes – the Force Knight, the Ninja, and the roguelike legend Tourist – as well as a load of new items, skills, NPCs, UI updates, and the ability to upgrade your castle with Dimensional Coins. It’ll cost you £4.04 on Steam right now, but if that seems a bit much, you can pick up the base game for £0.57 to see if it’s your sort of thing.

One Way Heroics Plus actually came out last week (I think) on Playism, but today marks the Steam release. You can grab it on whichever service you fancy. Playism is slightly more expensive thanks to Steam’s launch discount of 10%, but buying it on Playism also nets you a Steam key, so…

Tales from the Borderlands: Escape Plan Bravo – The Adventure Continues!