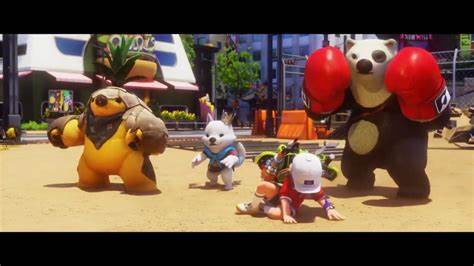 DokeV‘s monster-filled world consists of creatures known as Dokebi — mischievous and magical creatures that gain strength from dreams. These creatures take inspiration from Korean folklore, fitting as the developers are from South Korea themselves. It’s not just the creatures, though. The entire DokeV world is infused with Korean culture, from the snappy K-pop soundtrack to the environments featured in the game. The South Korean studio Pearl Abyss is best known for the MMO, Black Desert Online. And while DokeV was originally an MMO as well, it appears the studio is taking a different direction.

In a trailer revealed during gamescom 2021, we get a glimpse at some of the gameplay we can expect. And it’s certainly an interesting collection of different ideas. Flying through the air with umbrellas, skating through the colorful, open world on skates as if it’s Jet Set Radio, or riding a llama-like creature are some of the ways you can traverse the DokeV world. The combat itself is has tons of energy, with toys from hammers and inflatable bouncy balls used as weapons. It feels like an exciting, colorful fever dream, and it’s honestly very impressive.

There are already some creatures I’m impartial to and pining to capture. The trailer showcased some of these cute critters, including a robot with a clock for a head, or a white puppy with a cape and crown. You can check out a gameplay trailer for DokeV to get an idea of the game’s unique style and gameplay. An interview with the developers is available to view as well, giving some insight into the game’s direction. DokeV will release sometime in 2022.

Blasphemous’ final DLC wraps up the story in December, sequel planned for 2023