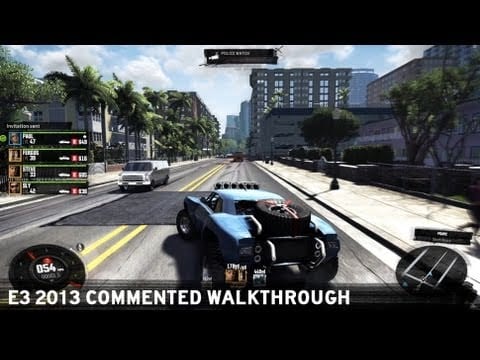 Sizeable chunks of of America will be your driving playground in Reflections and Ivory Tower’s The Crew, announced by Ubisoft at their E3 conference today. The cities of Miami, New York and Las Vegas will all be open to you and your vehicles.

Ivory Tower are a team formed from veterans of the Test Drive Unlimited series, so a driving title should be in fairly safe hands there. Reflections last worked on Driver: San Francisco, which was a bit of an underrated gem.

The on-stage demo showed off the “lobbyless” single and multiplayer integration, with the main driver simply pulling up his friends list and asking for assistance in a co-op event. The online aspects will be persistent, and there’ll be a full complement of modding and upgrading options for both your off-road and asphalt hugging cars.

Sticking around: South Park: The Stick of Truth coming “this holiday season”

Trials Fusion will send you sky-high