The unusual thing about many videogame sequels is that they’re simply an iteration of the original idea. When the bulk of a game is mechanics rather than story, people tend not to mind getting more of the same. This doesn’t really work with book or film; you can’t re-issue your novel or cinematic vision with a couple of extra jokes and a new character and call it a full sequel. Without the level of interaction offered by games, iterative sequels would just fall flat.

It’s been just nine months since the first Orcs Must Die was released, which even in the gaming industry is a short enough period of time to prompt raised eyebrows at a sequel. But by adding fresh traps and trinkets, a more open approach to character development and a full co-op mode, developer Robot Entertainment has done just about enough to merit that ‘2’.

In another twist unique to the games industry, the existence of Orcs Must Die 2 has pretty much rendered the first game redundant on the PC. If you’re coming to this series fresh, there’s little reason to dip into the original to catch up on its puddle-deep storyline. For those who already own OMD, the sequel throws you the extra bone of ten “classic” levels re-styled for this release. The message is pretty clear: you don’t need to go back. 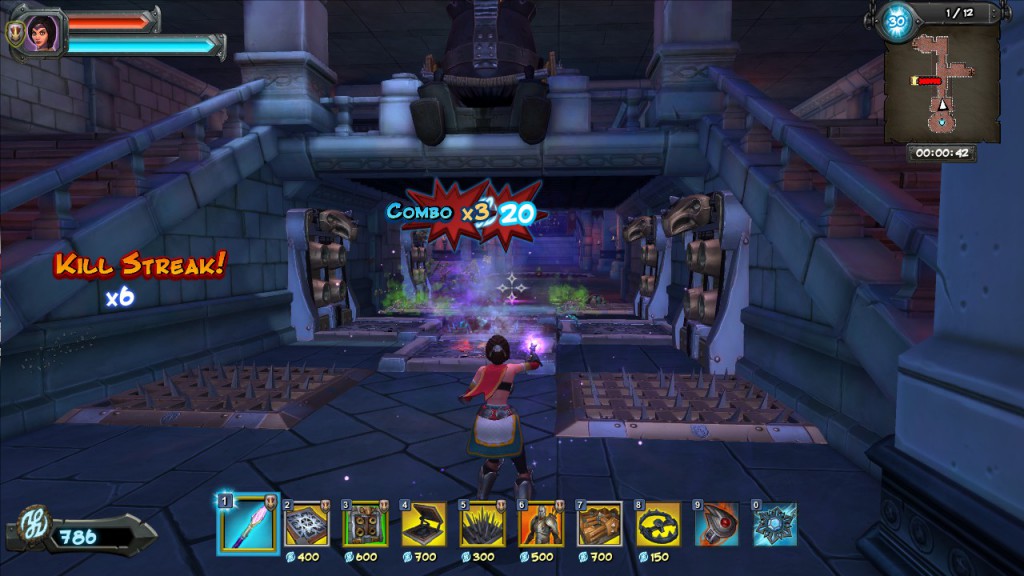 Just as before, the game casts you as an unfortunate soul in charge of fending off a marauding horde of Orcs and related creatures. These beasts are heading from A and trying, resolutely, to get to B. You do not want them to get to B. Prevent them from reaching B at all costs.

Luckily, the story could pretty much be replaced by a sign with “kill those Orcs please, there’s a good chap” written on it, so the two-dimensional characterisation isn’t exactly a huge problem. Each protagonist plays somewhat differently to the other (at least to begin with, when many of the traps have yet to be unlocked), which is really what counts in a game so focused on the methodology of Orc-slaying. 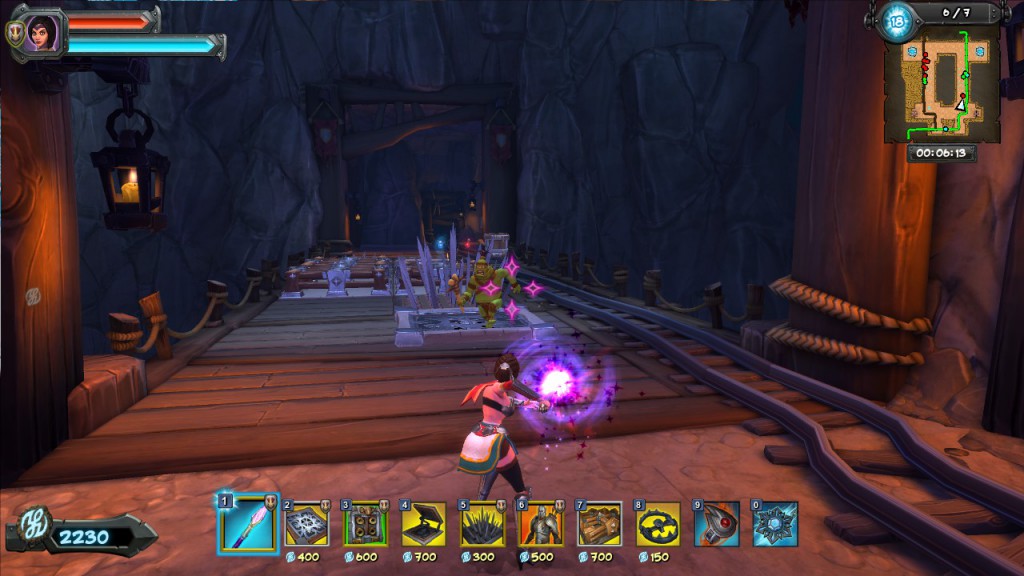 You’ll whizz through the 15-level campaign mode (at least on normal difficulty) in a matter of four or five hours; but Orcs Must Die 2 is a game where campaign progression is just a means to earn more upgrades and open up deadlier, more efficient means of offing Orcs to help you master levels and ascend the score tables.

Every level completed nets you an out of five skull rating, awarded for performance-based tasks like safely protecting Point B from the Orcs and finishing under the ‘par time’. Skulls can be spent in the spellbook/shop in return for new traps or upgrades to your current set. Everything, and I do mean everything, in this game can be upgraded in multiple ways. General tier upgrades might improve damage or range, while special upgrades (only one of which can be in use on a given trap/weapon at once) might add extra effects like damage over time or a slowing effect.

Thanks to an inspired design decision, ‘respecing’ your character can be done at no overall cost. You simply ask for the skulls to be refunded and then redistribute them as you see fit. As a result, new approaches can be tried out whenever you fancy. Since you can only take a total of ten different traps/weapons/items into a mission with you (one for each hotkey), it actually doesn’t take too much time to gather the amount of skulls necessary to be able to sample any combination you please.

As you gain more confidence and competence at the game, you’ll find that levels become less of a case of trying to stop the Orcs at all costs and more of an exercise in harvesting combos and beating your previous score. Once you’ve five-skulled every campaign level you might take a crack at a higher difficulty, or the aptly named ‘Endless Mode’ where wave after wave of enemies assail you until your inevitable demise.

The drive to murder the assorted Orcs, Trolls and Gnolls in creative ways is fuelled by some inspired sound effects (the bowling pin clatter as you split an Earth Elemental in two is a big favourite) and the diabolical selection of instruments at your disposal. Whether you’re burning, tossing, poisoning, skewering, perforating or freezing your enemies, the ragdoll effects and flying cartoon gibs will make your experiments feel worthwhile.

There is a nagging suspicion that the majority of levels are intended for co-op (though controlling multiple points of entry was a feature of the original too), so solo play on higher difficulties will tax even the most dedicated Orc-slayer. And for a title that keeps nudging you towards co-operation, Orcs Must Die 2 could be a little more expansive with its treatment of parties of two.

The interface in co-op is the same as the solo one, lacking any helpful pop-up indications like “by the way, your partner is over the other side of the map being flattened by an Ogre”. You won’t be playing with any random strangers either, because there’s no matchmaking facility whatsoever. For now, this is a friends-only affair. 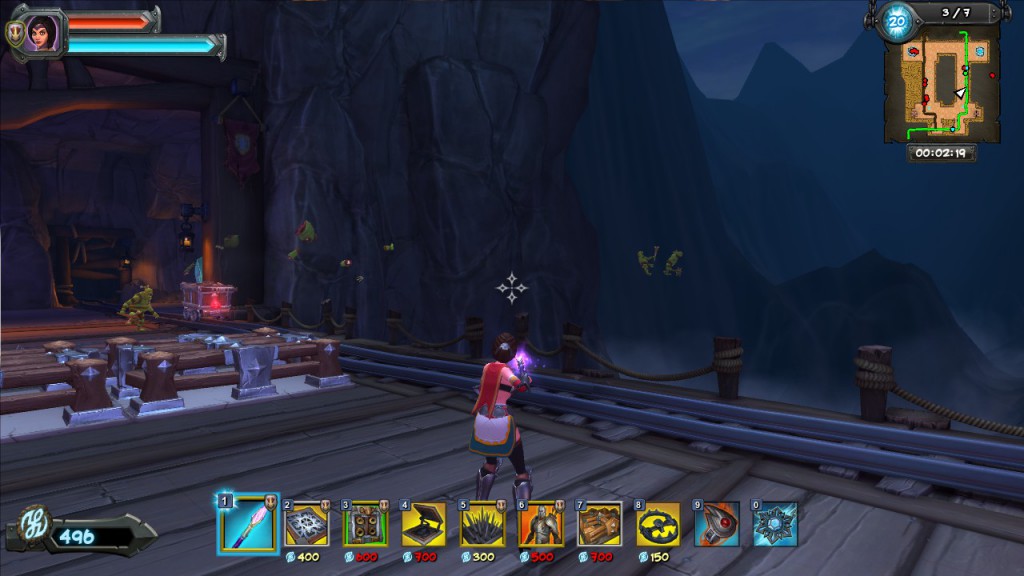 Whether in solo or co-op, you’ll need to bring skills from tactical and action-oriented games to bear in order to succeed. Aiming prowess alone won’t win the day, but nor can you afford to rely purely on traps to keep the hordes from your door. On Endless Mode, fatigue can even be a factor. Let your guard down for a moment on later waves and you’ll be a dinner table discussion piece at some Orc’s lair.

The nature of the title means repetition (both in the reuse of assets from the original and the game’s mechanics getting a little over-familiar) will burn players out eventually, and for OMD veterans this may be accentuated by the short gap between releases. But in fundamentally altering the manner in which characters develop and actively encouraging experimentation with a wider assortment of weapon and trap combinations, Robot Entertainment has justified another round of budget greenskin bashing. If you have a friend who’s inclined to defend some dungeons with you, co-op is the icing on a frozen Orc’s skull.

Steam Summer Sale is back, indie bundles at 75% off