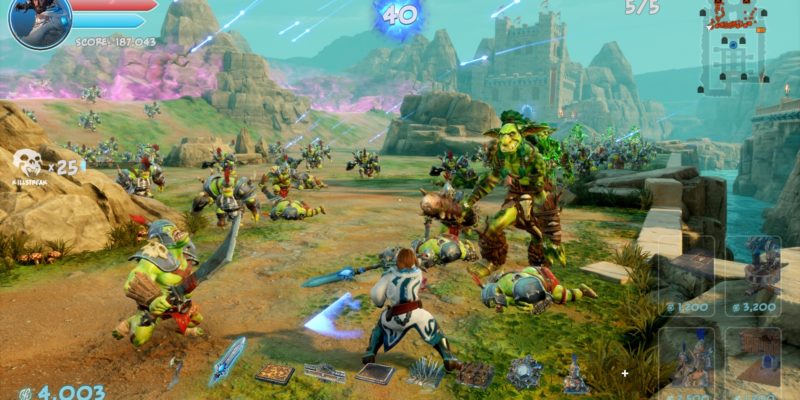 Over the course of video game history, players have built a mountain out of the orc corpses lying slain in the dirt or castle courtyards. Orcs Must Die! 3, the fourth game in a series that clearly states what it’s all about in the title and is releasing as a Stadia exclusive, is going to add another mountain all by itself. It may not be all that friendly to solo players, but it’s an excellent, challenging tower defense action game with great visuals and a whole lot of orc dissections.

Orcs Must Die! 3 is divided into a campaign mode and endless mode. The campaign mode has 18 levels, while endless has seven. Until you complete the campaign, you have free access to only two characters who have specific weapons affixed to them and a unique ability. These two new characters are apprentices to the series’ order. You’ve got Kelsey, who uses a blunderbuss and can hover in the air, and then there’s Egan, who has a spirit bow and can slam the ground and knock down weaker foes.

Unlike, say, Dungeon Defenders, you need to be much more proactive when stemming the enemy tide. Your traps are useful and make a difference, but most of them have cooldowns and only activate every so often. You’re meant to get in the faces of your enemies to stop them. The specific goal in Orcs Must Die! 3‘s levels is to protect the rift — a blue hole that needs protection for reasons. Standard levels will be failed immediately if 20 enemies make it into the rift, while war scenarios raise that limit to 40. 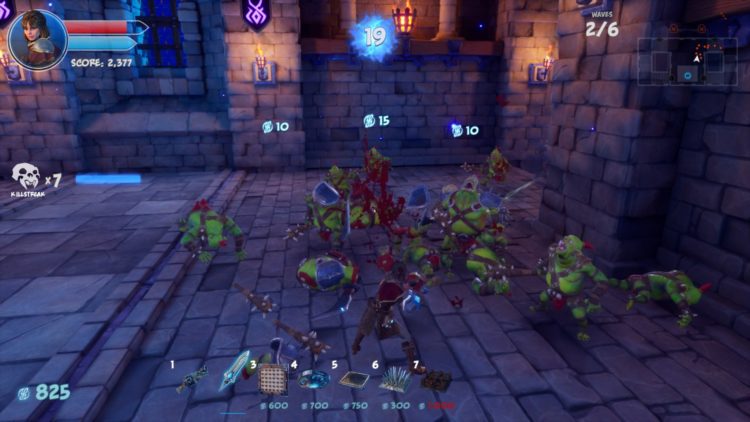 Each campaign mission has a specific number of enemy waves that you’ll need to weather to complete it. Once you do, you’ll be graded on several factors, such as how many enemies breached the rift and how much time you took. Your reward for doing well is that you receive a higher number of skulls, which are used to purchase new traps, weapons, and upgrades for both. You can get a maximum of five skulls via your rating, with several bonus skulls being added for various criteria.

You’re going to want to get your hands on every skull you can, as upgrades are far from cheap. There are a great many traps in Orcs Must Die! 3 and you’re going to want to change things up based on certain factors. My go-to combo for most of the campaign was brimstone floor panels laid in front of entryways and stairs with a buzzsaw trap right next to it. A dart spitter attached to the ceiling is also a nice choice.

Each trap and weapon has a set of a few standard upgrades that can be purchased, plus a couple of special equippable ones. The standard upgrades typically increase the number of charges a trap has, the amount of damage it does, or how long its cooldown lasts. For instance, a brimstone panel activates when it has sufficient charges and an enemy steps on it. Once several enemies step on it, it deactivates and enters a cooldown, meaning that enemies can safely walk on it during the interim without taking any damage. 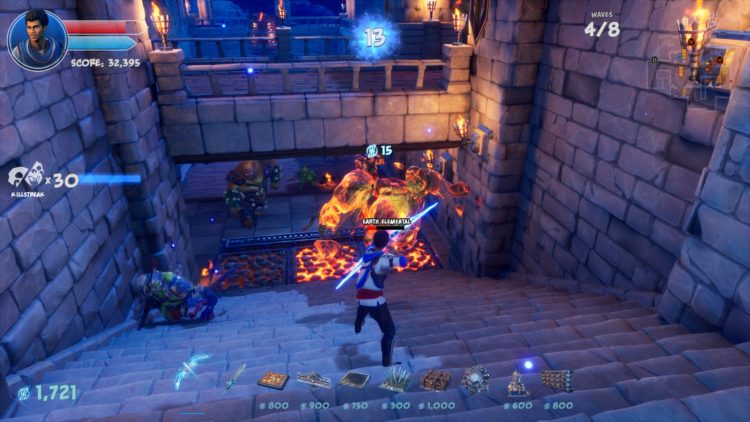 The equippable upgrades, on the other hand, typically change the type of damage done or add alternate abilities. For the brimstone panel, it turns them from fire damage to arcane damage, while the buzzsaw trap can gain a chance to freeze foes it hits. These considerations can be important because some gates will specifically unleash different types of enemies that might not be vulnerable to the kind of damage you’ve selected. Fire is extremely useful until you attempt to use it on a fire orc that walks away from it completely unharmed.

Each level in Orcs Must Die! 3 has a specific number of gates from which the enemies can enter the map. These are staggered to give you time to sufficiently trap each one. Levels start by offering  a certain amount of points you can use to build traps and usually just one or two gates active. You then trap the gates and do your best to hold the line. Once a wave of orcs descends on a gate, they break in and then move through it unimpeded. Early on, you’re definitely going to want to be standing at those gates, as the traps won’t be enough to stop your foes alone.

That would be tricky with your character’s default ranged weapons, so I prefer to have a blade in my hands. Indeed, you can take it to the orcs instead of relying only on your armaments. Orcs Must Die! 3‘s main bladed weapon has an upgrade that heals you every time you hit an enemy. This updated is extremely helpful when using your body as a sort of barricade, as enemies will often stop and fight you instead of ignoring you and walking straight to the rift. 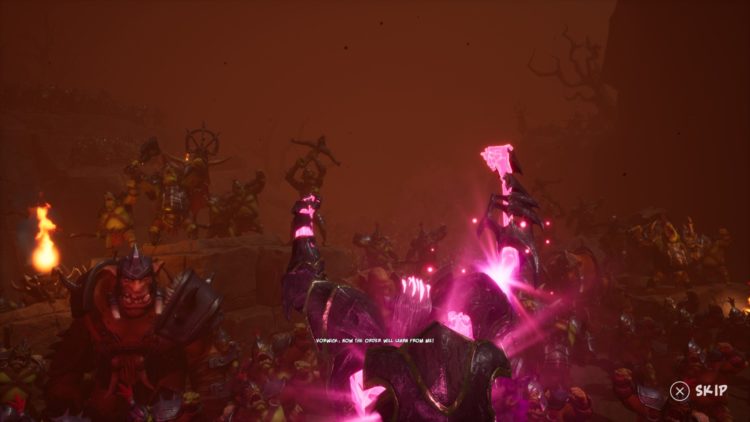 Enemies come in various sizes too. Bigger ones, such as ogres, take a whole lot of damage and are a major threat and distraction. Tiny enemies are much faster and often don’t even attack you, making it easy for them to sneak into the rift while you’re busy fighting something else. Naturally, a small enemy counts just as much as a big one, so it pays to be on your guard. And you’ll need to be, as the game floods the map with orc bodies. Things can easily become overwhelming.

Then there are the war scenarios. These function just like the standard ones, but they’re way bigger and throw many more enemies at you. More enemies mean more points and these scenarios give you much larger, more effective traps that can be placed outside of your stronghold. An entire company of archers can be placed on the battlefield, as can big freezing traps, and even a catapult that you operate yourself while flinging attacks at enemy forces. It’s epic and hectic.

By the end of a successful war scenario, you’ll have dispatched hundreds of foes and covered the map in a variety of traps. Characters can take a fair amount of punishment from enemies and there’s no real penalty for death other than getting teleported back to the rift. Which is actually really bad because, if you died, your traps weren’t enough to keep the orcs at bay, so they’re all going to be flooding into the rift. 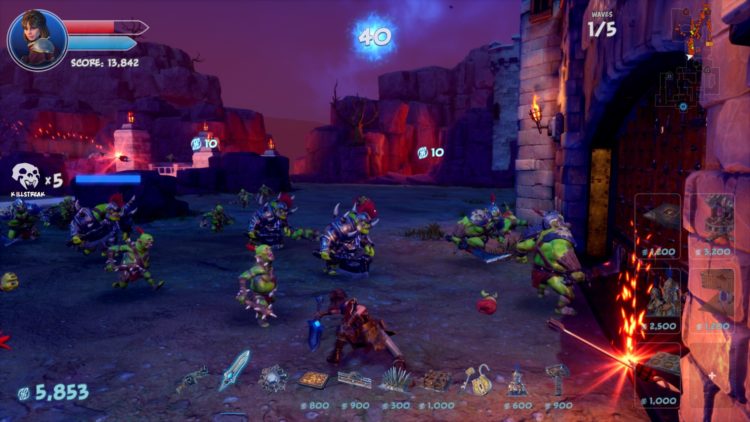 Which is going to happen, especially solo. Orcs Must Die! 3 has three difficulties and playing by myself pretty much required me to select the easiest one. Even then, the game often wasn’t easy. Some levels are quite difficult to win even on this setting if you’re alone, so I strongly recommend playing with other people.

Orc: the other, other green meat

Orcs Must Die! 3 is a very strong, enjoyable action and tower defense game. It handles a huge number of detailed character models very well and has a great suite of traps and a lot of tactical considerations. I had a great time with it and fans of the genre likely will too. 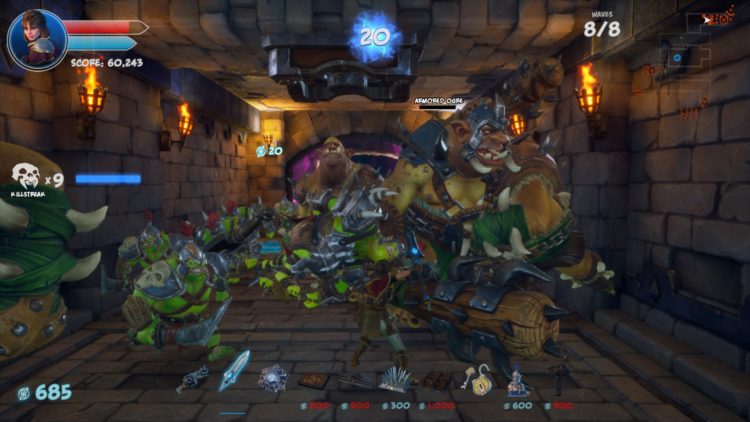 Orcs Must Die! 3 is a hectic, challenging hybrid of action and tower defense that is a lot of fun for anyone looking to kill a ton of orcs.

Interview: Space truckin’ with the creative director of Dual Universe

By Kurt Perry15 hours ago
Reviews