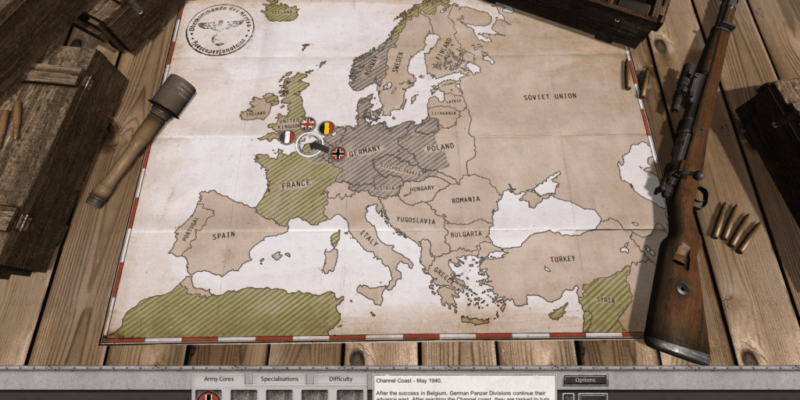 The passage of time can create some bizarre circumstances. In June 1940, one of my family was being evacuated from the beaches of Dunkirk. 76 years later, I’m moving little virtual representations of soldiers around on Order of Battle: Blitzkrieg’s videogame hex board in an effort to win that same battle for the German army. However you frame it, that’s a pretty weird turn of events.

Mostly, it makes me feel like a bourgeois wastrel. But it’s also encouraging that a once all-powerful fascist war machine can be so neutered by time that it now appears in a product of entertainment for armchair military strategists. Sure, there are always people who will get a little too into playing as the Germans, but hopefully most of us are relating to Mark in that particular Peep Show scene. 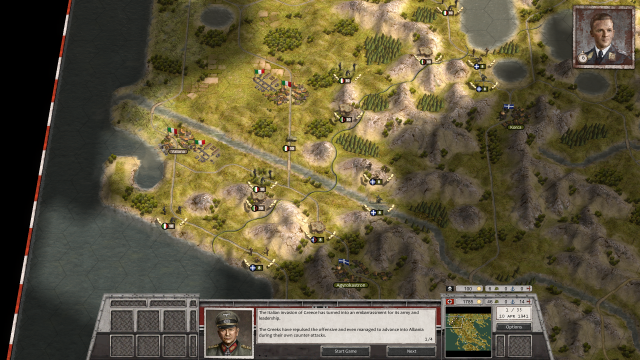 This game gets right into the German military spirit, including mocking the Italians in mission briefings.

Slitherine are trying to draw in as many Marks from Peep Show as they can with Order of Battle’s new structure. What was previously Order of Battle: Pacific (a full priced game with American and Japanese mission sets) is now a free hub for several different period campaigns called Order of Battle: World War II. The ‘free’ part allows you to try out demo sections for each set of missions, which come with price tags ranging from $15 to $20.

It seems like a smart system, and it means that while Order of Battle: Blitzkrieg is technically an expansion pack, within the new structure it’s also a $15 stand-alone campaign. You get twelve missions in all (lasting one or two hours apiece), covering the German army’s movements in Poland, Norway, Belgium, France, Yugoslavia, Greece, and culminating in the long, cold march to Moscow. What could possibly go wrong there?

Yes, as the title suggests this campaign is all playable Nazi Germany all of the time. There are a touted 200 new units in this expansion, but you’ll just be using the German ones. The rest are there to crumble in the face of your advancing Panzers. Or not, if you balls up and leave your tanks stranded and vulnerable in a river to be picked off by the eager Allies. Which obviously never happened to me. I’m just recounting a story told to me by a totally different, much more idiotic, member of the virtual German high command. 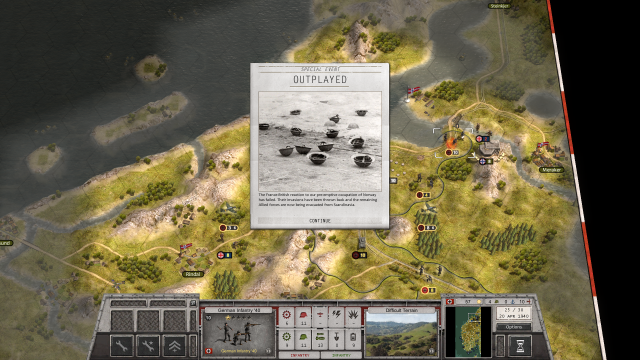 Blitzkrieg also lives up to its name in terms of how missions are framed. You’re pretty much always being hurried along, encouraged by secondary mission objectives (and general tactical expediency) to make rapid territorial gains. Abstraction imitates history here, pushing players to make risky maneuvers that will stretch their supply lines (crucial again, as in Pacific) but may ultimately bring about victory. In several missions I found myself teetering on the brink of collapse, pulling off a success with a battered and exhausted force. That was partly, I’m sure, down to my questionable tactical acumen; but it also feels partially by design. Just enough resources to get the job done, but only if you move and act decisively.

The nature of the German advances means there are fewer full-scale ‘combined arms’ exercises than were present in Pacific. Aside from the attack on Norway, naval vessels tend to play bit-part roles in Order of Battle: Blitzkrieg. Of course you still need to support your infantry and armour with air and artillery, so it’s really just sea battles and beach landings that are side-lined. There are no alt-history missions here either (Pacific had you invading Australia to conclude the Japanese campaign); mission twelve wraps up outside Moscow with a fatal prediction of a German victory next Spring.

Systems of engagement are much the same as they were in Pacific. Unit strength, efficiency (how much a unit has been bombarded or forced to trek over harsh terrain), entrenchment, flanking allies or foes, and terrain types all combine to form an overall amount of damage that will be done to both parties. Pop-ups will give you an estimate before you launch an attack too, so it’s not left up to the player to figure that stuff out. The actual statistical specifics of what’s being calculated behind the scenes is still a slight mystery to me, but unit engagements in Order of Battle: Blitzkrieg are intuitive enough for this not to be too much of an issue. 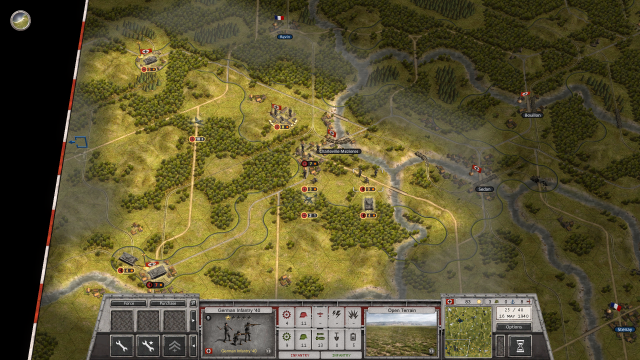 Limping to victory in Belgium with some exhausted tank battalions.

A basic unit of infantry engaging a tank on open plains are going to have a bad time; that’s something anybody who’s played a war game (or thought about basic military engagements for five minutes) can figure out from experience. Likewise, it makes sense that if that infantry unit is attacking from inside wood and backed up by some air support, they might actually be able to do some damage. Aside from a few, more esoteric, circumstances, the outcomes of most engagements can be extrapolated from straightforward rules regarding terrain and unit types.

Order of Battle: Blitzkrieg takes a slightly different approach to research and technology than the prior game. In Pacific, you would make ‘either or’ choices after campaign missions; specialising in either air units or armour, for example. Blitzkrieg has a more traditional flow-chart tree, where specialisation points (earned after every mission) can be invested in boosts to your personnel. This ties in rather well to secondary mission objectives, which will often reward the player with a couple of bonus research points.

It’s not a massive or expansive tech tree (there are twelve missions, after all), but it offers useful bonuses like increased damage for ground forces. There’s also one that boosts the radar on warships, which isn’t exactly a huge amount of use in this largely land-based campaign. 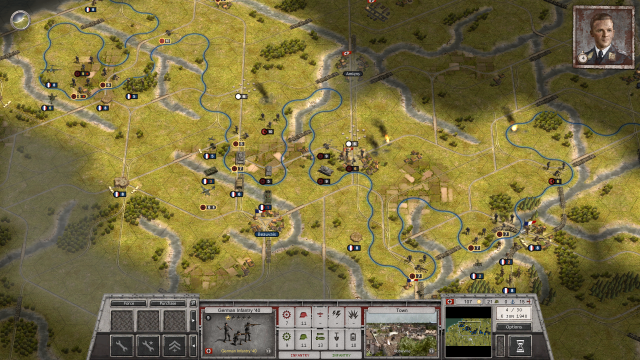 My military tendrils extend their reach into France.

The AI in Blitzkrieg is no slouch when prioritising actions, and is pretty ruthless in moving to cut supply lines (which can leave stranded units in serious peril) or targeting vulnerable troops (such as those traveling by train). If you don’t fancy going up against the AI, then as with Pacific there is a thoroughly old school asynchronous multiplayer mode in which to partake (plus hot seat play for either competitive or comp-stomp modes in a limited selection of missions). The same scenario creation editor returns too.

Order of Battle: Blitzkrieg is a natural continuation of the base of mechanics and systems established by prior Order of Battle releases, specifically Pacific. The nature of the battles in Blitzkrieg makes it more of a land-based affair than the full air, land, sea combination found in that title, but the theme of rapid, supply-stretching assaults is smartly reinforced during each mission. There are a few too many battles with the straightforward objective ‘Kill X number of enemy ground forces’; but even these tend to have dynamic aspects which change as the engagements progress. Despite being a hex-based military war game of some depth, the series remains surprisingly accessible. It rarely feels this intuitive to abstractly re-fight WWII battles that may or may not have directly involved past generations of your family.

Dishonored 2 getting New Game + and custom difficulty levels next month